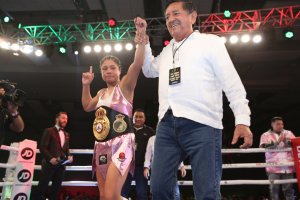 This was, indeed, a year of great action for women’s boxing. With fighters who have emerged and others who have managed to consolidate. The World Boxing Association is proud to congratulate each of the female warriors, who, notwithstanding the difficulties the world is going through, have left everything on every stage of 2021.

After an exhaustive review of the presentations we have had, we present the figures highlighted by the pioneering entity: Jamie Mitchell, Erika Cruz, Hanna Rankin and Kali Reis.

“Miracle” Mitchell, turned pro in 2017 after a brilliant amateur career. Under the tutelage of Dewey Cooper at the Mayweather Gym, having completed a total of 6 fights, she got the dream of becoming the 118-pound world champion. In September, as a visitor there in Liverpool, she made her seventh fight against former WBA champion Shannon Courtenay. After ten championship rounds, and with an exquisite technical display, Mitchell was consecrated as the new owner of the WBA bantamweight belt in a split decision of the judges.

Another boxer who traveled in search of gold was Mexico’s Erika “Dinamita” Cruz Hernandez. In April, the representative of the Armed Forces of the Federal District of Mexico, measured her talent against the emblematic former featherweight champion, Canadian Jelena Mrdjenovich. In a dramatic duel and against all odds, the fight had to be stopped in the seventh round by medical order, due to the bloodied face of the Canadian. Thus, Cruz Hernandez won the belt  of the division. In November, she successfully made her first defense against Melissa Esquivel, concluding a great 2021.

The Scottish-born Hanna “Banger” Rankin starred against outstanding fighters such as Alicia Napoleon Espinosa, Claressa Shields, Patricia Berghult or Savannah Marshall. She tested herself in the major and medium divisions and made a leap in quality by establishing herself as a super welter this year. In November, she fought for the 154 lbs. title against the experienced Swedish Maria Lindberg and won unanimously to keep the crown.

And finally, among our picks, is the American native Kali “KO Mequinonoag”, the woman of many feathers. In March 2018, she lost on the cards to the then undisputed “First Lady” Cecilia Braekhus. She then racked up a total of three victories and fought again in November 2020  in St. Petersburg, USA, against Canada’s Kandy Wyatt. In a tough exchange of punches, Reis got the best of her boxing and won the vacant super lightweight title. In August of this year, she made her first successful defense against Diana Prazak and won the IBO belt of the category. Then, she was one of the chosen ones to be part of the ROAD TO UNDISPUTED, the first women’s tournament in which all the 140 belts have been put on the line. In what was her first fight of the tournament, Reis retained her belts and added the WBO belt with a victory over Jessica Camara. She is now preparing for 2022 when she will fight Chantelle Cameron in the finals.

The oldest boxing organization invites, through its networks, to give their opinion and participate in this selection.