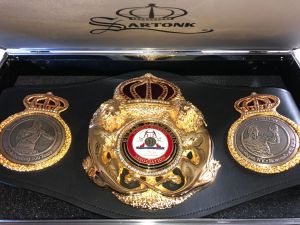 The World Boxing Association (WBA) will award a commemorative belt for its 100 anniversary to the winner of the fight between Saul “Canelo” Alvarez and Caleb “Sweethands” Plant, this Saturday, November 6 at the MGM Grand in Las Vegas, where the Super Middleweight Super Championship of the pioneer organization is being disputed.

The black gold belt will have two gold plaques on the sides with the silhouettes of both gladiators. In addition, it will read “WBA Centennial Anniversary”, “Celebrating 100 years” and the date of the fight.

The pioneer organization was born in 1921 and on July 2 of that year, under the name of the National Boxing Association (NBA), sanctioned the first world championship bout, whose protagonists were Jack Dempsey and George Carpentier. From that day on, boxing has been officially regulated and the WBA belt became the most precious treasure for the warriors of the ring.

This belt, made with extreme delicacy by the Sartonk, wants to honor these two great warriors who will step into the ring on November 6 and who, by holding this belt, will know that they have in their hands the legacy of legendary champions.