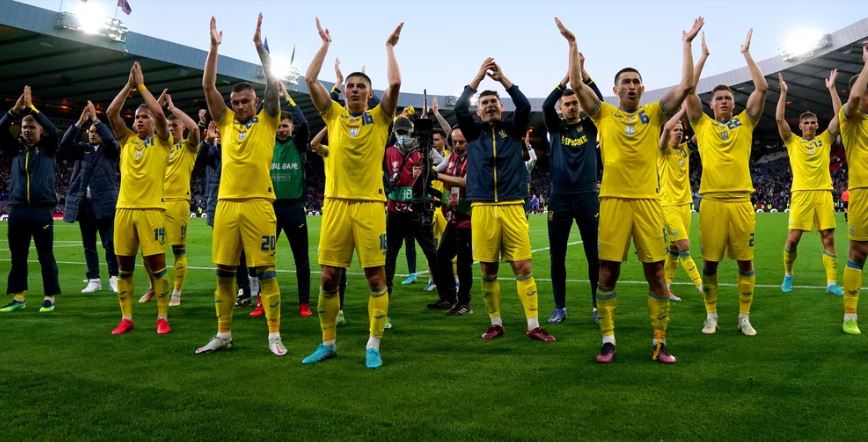 It was a scene that, on its own, was almost as powerful as the performance. It showed how this had gone beyond sport, that it was a football moment like few others.

Artem Dovbyk had just put the ball past Craig Gordon to put Ukraine one game from the World Cup, in a moment that would usually have brought images of euphoria. This was something else, though.

Dovbyk was momentarily left to celebrate on his own, because most of his teammates just sank to the ground. A striking quietness engulfed Hampden Park, that was unlike anything you ever really experience in a stadium, and reflected the extremes this had gone to.

The Ukrainian players left all their emotion on the pitch, to quote their manager Oleksandr Petrakov, so could do little more than lie there. They were utterly exhausted but it was that kind of exhilarated exhaustion that only comes from going to the very limits.

They aren’t done yet, of course. “We go to Wales,” Petrakov said, in the one moment he smiled during a stirring post-match press conference.

That in itself reminded how many layers there were to an evening that really went beyond a game.

The Ukrainian team and their manager were keen to insist that the job is not done, that it’s just “a little step to our great aim”, but they were also so fully conscious of what this really meant.

It was, in the words of one Ukrainian journalist speaking to Petrakov from his home country on Zoom, “some normality”.

It was light. It was joy.

It was why Ukrainians from as far away as New York and Sydney had insisted on making the journey to Glasgow, their own small piece of service.

This was to bring a country together.

There were constant reminders of the actual realities of that through the night, how these were not just words.

It was close enough to kick-off that reports came from Ukraine that air-raid sirens were going off around the country, forcing people to watch this in shelters.

There was then a significant change of tone in Petrakov’s press conference, as he refused to let people escape the truth of what this all meant; that it was a stirring story for the most grave reasons.

“I hope this conflict never touches you, but you just have to think of the women and children dying every day, the women being raped and gang-raped by these orcs, as we call them.”

It was difficult for people in the room to know what to say to that. That was the point. It also reminded of a relevant point about the game itself.

On watching it, and seeing a player like Oleksandr Zinchenko absolutely run the game in a way he isn’t quite afforded in the Premier League, there can be an mean-spirited inclination to think of these players as just multi-millionaires insulated from the true horrors of this just doing their small part. Nothing could be further from the truth.

Zinchenko himself is evidently so psychologically consumed by the conflict that he is constantly updating his social media with jarring images to remind people of this. All of the players have family who have suffered.

More than half of the starting line-up still play in Ukraine, and had to escape once the conflict began. All are deeply affected.

Petrakov of course offered his services to the fight, only to be told to give the best service he could: try and get the team to the World Cup.

Those circumstances have meant most of these players had not played in half a year, which reminded how they had almost defied the realities of sport for this match.

While they were seen as a superior team to Scotland, it had been thought that they would likely run out of energy.

They instead made Scotland do the running. For most of this match, it was not a case of defiant players from a beleaguered nation showing vintage resolve. It was fine players performing to the highest quality, and offering brilliant technical football.

That was what really won the game, even if they inevitably lost energy towards the end of it.

That was when the deeper will took effect, when the emotion finally had its impact.

It was what ultimately brought them to their knees at the final whistle, combined with the realisation of what they’d done.

The inevitable thinking now will be that Sunday will be a game too far; that Wales are that bit too good; that this night in Hampden Park took too much out of them.

But emotional momentum can be a powerful thing, especially in a situation as intensive as this.

Wales will also have been reminded that this is a properly good team, regardless of anything else. The question was naturally put to Petrakov after the game.

He had been just looking ahead for most of the press conference in an almost emotionless way, as if he was still taking in what he had overseen. There was another slight change of tone here, as if being able to just talk about how they will work just immersed him in it all again. It was itself a little sign of the focus of this squad.

“Tomorrow we fly at 11.30am to Cardiff, then there will be intensive training in two groups, then lunch, then another session, and we try to recuperate mentally.”

And yet, as understandably intense as all this was, Petrakov himself still had the presence of mind to make one important point before he left.

“We want to extend our immense gratitude to the warm and hospitable people of Scotland… Thank you Scotland, we will never forget that.”