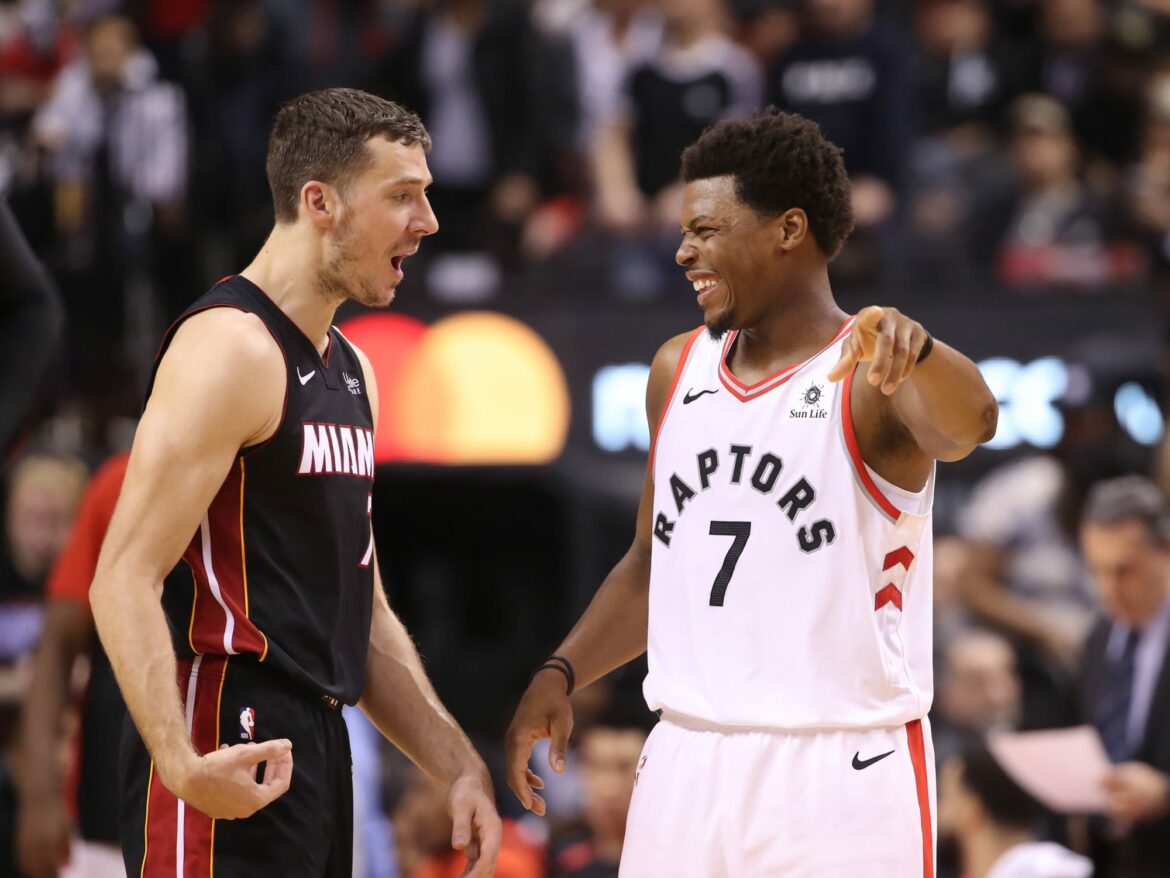 Goran Dragic will make a layover in San Antonio following a Spurs trade, but where will his final destination be?

The NBA Trade deadline is good for two things: Absolute chaos and setting the market for the frenzy that follows.

As if the deadline itself isn’t insane enough, the chaser to the trade drama is the gold rush known as the buyout market. Not every player who gets moved in a deal will actually end up playing with the team that acquired them.

The first example of that this year is former Raptors guard and brief member of the Spurs, Goran Dragic.

Spurs trade for Goran Dragic, but plan to buy him out

Dragic was dealt to the Spurs in a trade that sent Thad Young to Toronto, a move that netted San Antonio a first-round pick. It’s that draft asset the Spurs will be keeping, not Dragic who is expected to be bought out and hit a market in which he will be gobbled up by a playoff contender.

Who that contender ends up being is the question everyone wants an answer to.

Buckle up and prepare yourself for just about every veteran who hits the buyout market to be mentioned alongside the Lakers. Los Angeles remains in a freefall out West, not only losing actual games but losing the war of public opinion.

When Cam Payne is roasting you in a Twitter Spaces as ‘the worst team in the West’, it’s time to look inward and consider exactly what the future looks like. For the Lakers the future is grim and not showing many signs of getting much better.

Los Angeles is clinging to a spot in the play-in tournament and will once again have to fight its way into the NBA Playoffs. The Russell Westbrook drama has been dominating the national focus on L.A., with LeBron and Anthony Davis doing little to draw that attention away from him.

Adding another aging veteran to the petri dish the Lakers are experimenting with seems both very dumb but very on-brand for what they’re trying to do. It’s also the type of a move a team reeking of desperation would attempt, especially in the wake of failing to trade for Buddy Heild or Marvin Bagley III, two players that the Lakers were rumored to be landing before the Westbrook deal who have now been moved in deals L.A. very much could have matched.

Does any of this make a lot of sense? No.

Is it fun to keep dunking on the Lakers?

One of the biggest surprises this season has been how high the Cleveland Cavaliers have soared. An afterthought before the season, Cleveland quietly started the season stronger than expected and have now climbed all the way to a Top-5 seed in the Eastern Conference.

The Cavs also kicked off the trade deadline frenzy a day or so early by landing Caris LeVert from the Indiana Pacers, which when the dust settles could end up being one of the best acquisitions made ahead of the deadline.

Cleveland clearly sees its window and isn’t going to take it for granted. Trading for LeVert signaled that they’re trying to win, and adding Dragic would only solidify a roster that has outperformed everyone’s expectations.

Add the Dragic that limped through an injury-riddled 2020-21 campaign, in which he averaged 13.4 points and 4.4 assists while shooting 37.3 percent from three-point range, and the Cavs depth improves in a rich-getting-richer way. Now imagine if Dragic, who is healthy but stepped away from the Raptors for a personal matter, can tap back into the player he was while being instrumental to the Bubble Heat’s run to the NBA Finals, and all of a sudden the Cavaliers go from having our curiosity to demanding our attention.

Well, well, well, if it isn’t the Dallas Mavericks in a position to add some guard depth (and yet another Slovenian player) to its roster.

Much like the Lakers, it seems the Mavs are routinely mentioned in buyout market rumors but unlike L.A., Dallas is a good team this year and it makes sense for them to see about adding veteran depth. Specifically, Dragic won’t be asked to as much in Dallas as he might in other places, and it gives him a chance to help continue unlocking Luka Doncic as a superstar.

As Mavs beat writer Callie Caplan pointed out, Dallas would need to make a roster move to add Dragic if that’s where this is all headed.

Adding Goran Dragic after a buyout would require the Mavs to waive one of their current 15. Moses Brown plays the least. Frank Ntilikina recently fell behind Trey Burke in the rotation. I feel pretty confident in guessing Luka Doncic is safe, though.

There’s a price to be paid for the Mavericks to add Dragic, but it’s a move that makes sense and is gaining steam. It’s also worth wondering whether the move truly makes the Mavericks significantly better or if it’s more of a gamble than anything else.

Yes, he adds an obvious statistical boost, and there’s the wisdom of a playoff-experienced veteran that he brings to the locker room. Buti is Dragic better than Trey Burke at this point in time? Do the Mavs need more of a true two-guard if they’re going to make a move?

What better time to find out than now?

Wait, what about the other two teams?

Oh yeah, we said five teams. In that case try the Miami Heat and Chicago Bulls on for size.

Those aren’t throwaway choices just to get the number of teams higher. The Bulls don’t make a ton of sense when you look at their roster but they do when you look at how much of that roster is healthy. Chicago is having a dream season in the East but has fallen back with recent injuries to key players. If one of the main objectives of the buyout market is to add depth, the Bulls are the poster child for needing exactly that come playoff time.

Then there’s the Heat, who as we’ve mentioned have some history with Dragic. He was instrumental in helping Miami storm the NBA Finals in 2020 and reunion makes a ton of sense. He made it known how unhappy he was when the Heat traded him to the Raptors for Kyle Lowry which makes the dots even easier to connect here.

Imagine this from the perspective of Pat Riley: You traded Dragic for Lowry, only to get Dragic back a year later. That’s a deal almost too good — and savage — to pass up.