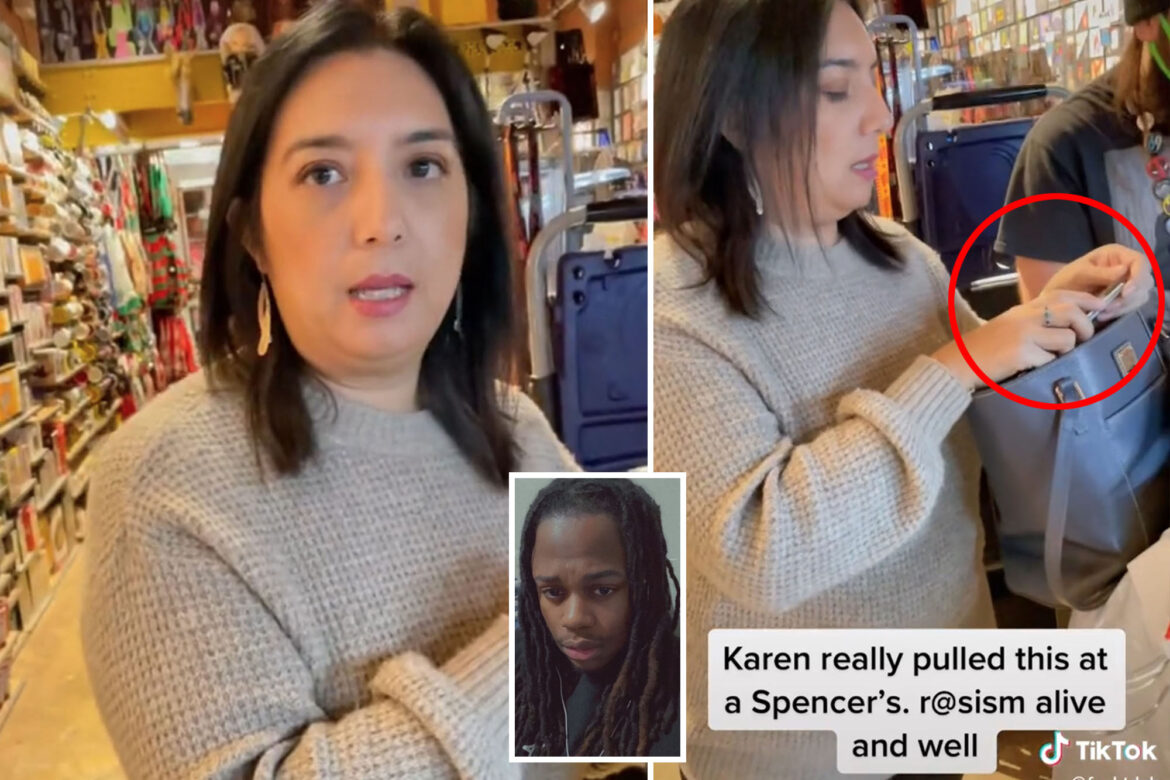 A white woman accused a black man of stealing her phone at a California mall — even accusing him of turning off the ringer — before finding the device in her purse, new video shows.

The footage, posted to TikTok Monday, shows the unidentified woman looking through her bag at a Spencer’s at Sunrise Mall in Citrus Heights outside Sacramento.

“Can you call it, because she won’t let us call it?” a woman with the accused thief asks the Spencer’s employee.

The woman then begins to give her number, saying “9-1-6” before stopping herself and accusing the black man of taking another step to hide her phone after allegedly swiping it.

“Well, he could’ve turned off the ringer,” she says.

“Oh my God!” the woman with the accused man replies. “What, do you want him to get f–king naked, lady?”

A California woman went viral after accusing a black man of stealing her phone before finding it in her bag. TikTok / @fuxktdub

“I really need my phone back,” the distressed woman pleads as the Spencer’s employee asks for calm while sorting out the missing phone.

The accused thief then appears to empty out his pockets, showing his vape, as the woman continues to search for her lost device, the clip shows.

“I just stuck it right here, you walked right behind me and you took it,” the upset shopper says.

“I did not take it,” the accused black man says.

The Spencer’s employee then gives the woman his phone to call her elusive device — only to find it stashed away in her purse, the clip shows.

“Is it in your purse, ma’am?” the woman with the accused thief says as the cellphone rings loudly.

“F—k off,” the woman with the accused man replies. “No you’re not.”

The accused man isn’t shown in the video, but the clip was uploaded by the account @fuxktdub, who says they are married to a black man.

“The whole situation was funny to me lol,” the accused thief wrote Wednesday on his account, @yenom_teg.

The “California Karen” accused the man of turning off the phone’s ringer in an effort to steal the phone. Instagram

The woman was condemned on TikTok.TikTok

The viral footage recalls Miya Ponsetto, the woman dubbed “Soho Karen” for falsely accusing a black teenager of swiping her cellphone at a Manhattan hotel last year. She pleaded not guilty to hate crime charges in June. Her trial is set to start on Jan. 10.

“Karen really pulled this at a Spencer’s,” reads a caption on the latest viral clip. “[email protected] alive and well.”

Some critics on TikTok, meanwhile, didn’t hold back.

According to the video, the man emptied his pockets but the woman continued to insist that he had stolen the phone. TikTok

“She didn’t wanna call her phone because she saw it in her bag and knew you were recording,” one woman said.

“I didn’t wanna catch a chase,” the accused thief replied.

Another woman praised the man for keeping his cool throughout the tense ordeal.

“Accused of stealing and being told to calm down, I would’ve been so triggered,” she wrote.