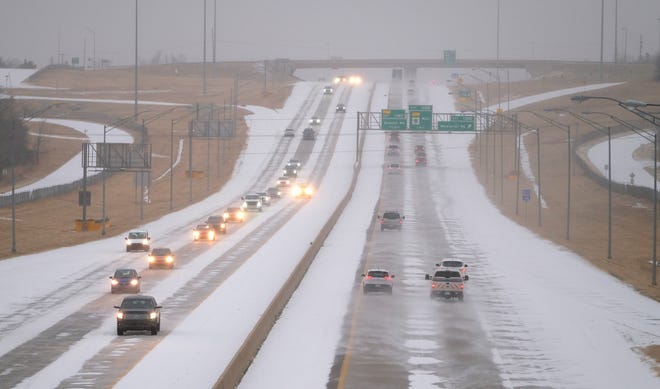 The storm will have impacted about 265 million people from California to Maine. “Prepare now for this major winter storm,” the Weather Service warned. Ice-glazed roads led to hundreds of traffic accidents in the central U.S.

A huge storm continued its assault on the central U.S. Thursday, and its eyes were set on the Northeast later in the day and on Friday.

Ice-glazed roads led to hundreds of traffic accidents in the central U.S., including one in Kentucky that killed a toddler.

Over a thousand flights were canceled Thursday at Dallas-Fort Worth International Airport as portions of Texas, Oklahoma, Missouri and Arkansas braced for an ice storm.

“Power outages and tree damage are likely due to the ice,” the National Weather Service in Missouri said. “Travel could be nearly impossible.”

More than half an inch of ice could accumulate in the Ozarks through Friday morning, while another area of freezing rain was expected to hit south-central Pennsylvania and western Maryland, the Weather Service said.

“Prepare now for this major winter storm,” the Weather Service warned. “Widespread hazardous travel and damage to the power infrastructure are expected.”

Northeast could see a foot of snow or more

The storm is also forecast to cause major travel disruptions further north by spreading up to a foot or more of snow in parts of the Northeast and New England, AccuWeather said.

A broad area of 6-12 inches of snow with locally higher amounts is forecast from western New York through central Massachusetts and central and southern Maine. Within this zone, from the southern parts of Vermont and New Hampshire to northwestern Massachusetts, about 1-2 feet of snow is forecast, AccuWeather predicted.

This expansive and far-reaching storm will have impacted about 265 million people from California to Maine by the time it exits the U.S. Friday evening, according to AccuWeather meteorologist Bernie Rayno.

In addition to the snow and ice, temperatures will be 15 to 35 degrees below average over the northern and central Rockies, Plains and the Mississippi Valley, the Weather Service said. As a result, several locations will see record-breaking low temperatures.

WHAT IS WIND CHILL?:Understanding the wind chill index and how it’s calculated

Wind chills of 40 below zero were reported in Wyoming and Nebraska. “The cold wind chills could cause frostbite on exposed skin in as little as 15 minutes,” the Weather Service in Cheyenne, Wyoming, said. “Avoid outside activities if possible.”

Unusual cold was also the main weather story in California, as temperatures dipped into the 30s in Los Angeles on Thursday morning. Hard freeze warnings were in effect across much of the state.

Meanwhile, the Sunshine State of Florida was living up to its nickname, as highs across most of the state were forecast to top out in the 80s on Thursday and throughout the upcoming weekend under sunny skies.