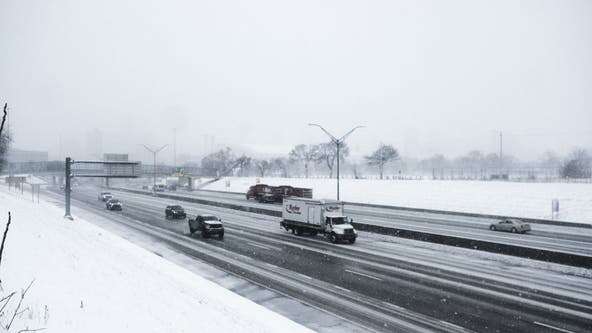 The National Weather Service has issued a Winter Storm Warning for Thursday from 8 a.m. to midnight ET.

Mixed precipitation in the morning will be followed by heavy snow with 5 to 9 inches of snow expected and ice accumulations around one tenth of an inch.  Winds gusting as high as 40 mph could cause considerable blowing snow.

As a winter storm unfolds, Chicagoans can expect a mix of heavy rain, sleet and snow in coming days, likely causing travel concerns and flooding.

By Thursday afternoon, the rain and sleet will likely turn into heavy snowfall, which could accumulate from 1 to 8 inches.

Chicagoans can expect more than 1 inch of snowfall per hour at times Thursday afternoon, officials said, accompanied by wind gusts up to 40 mph.

In DuPage, La Salle, Kendall, Grundy, Kankakee, Livingston, parts of Cook and parts of Will counties in Illinois, as well as Lake, Porter, Newton and Jasper counties in Indiana, a wind advisory is in effect from 9 a.m. to 6 p.m. Wednesday.