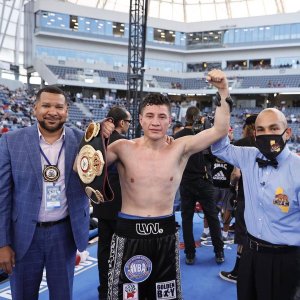 The World Boxing Association (WBA) Continental Americas lightweight champion, Mexican William Zepeda, will return to the ring this Saturday to face Philippine John Vincent Moralde during in the same program where Jaime Munguía and Gabriel Rosado are the main event.

Zepeda and Moralde will star in one of the best fights of the card for the regional black and gold belt. The “Camarón” will put the title on the line for the first time against the Asian and both want to come out with their hands up.

At 25 years of age, Zepeda has begun to make his name felt in the world, especially after demolishing Hector Tanajara on July 9, in the United States. The San Mateo Atenco native defeated one of the best prospects in the division and made it clear that he is ready for big things at 135 pounds.

Moralde has an interesting record as he has fought opponents such as Janet Herring or prospect Xavier Hernandez. The 26-year-old Tagalog comes in as a challenger and without pressure against the Mexican.

Zepeda is undefeated in 23 fights, 21 of them by knockout, while Moralde has 24 wins, 4 losses and 13 knockouts.