A 15-year-old student was taken into custody Tuesday after authorities say he fatally shot three students and injured six other people, including a teacher, at a high school near Detroit.

The Oakland County Sheriff’s Office said it received a barrage of reports about an active shooter around 12:51 p.m. local time at Oxford High School in Oxford Township, a suburb located about 35 miles north of Detroit.

The boy, a sophomore at the school, was taken into custody within minutes of the shooting, said undersheriff Mike McCabe. A deputy assigned to the school as a school liaison helped get the suspect into custody. The suspect fired anywhere from 15 to 20 shots during the incident, McCabe added.

“He didn’t give us any resistance when he was taken into custody,” McCabe said. “The whole thing lasted 5 minutes.”

Authorities did not say whether anyone was targeted and did not release any information about a motive. McCabe said authorities were investigating whether there were any warnings ahead of the shooting or if the student had any history of violence. He added that students and others would be questioned.

This news is developing into the evening. For an update later tonight, sign up for the Evening Briefing.

One handgun, a semi-automatic, was recovered. The suspect, whose name was not released, invoked his right to remain silent and refused to speak in depth with authorities, McCabe said.

Some Oxford High School students interviewed by reporters afterward described a chaotic scene in which a voice came on over the intercom to announce an active shooter.

At first, they said, they didn’t know whether it was a drill.

But when they realized it wasn’t, they were struck by fear and panic. They said teachers locked and barricaded doors, covered windows — and some students hid. Those with cell phones quietly texted to alert their parents and friends what was happening.

Some students said they could hear loud bangs.

Abbey Hodder, a 15-year-old sophomore, was in chemistry class when she thought she heard glass breaking.

“Then my teacher kind of ran out and was scrambling … and the next thing I knew I saw he was pushing tables … Its part of school protocol to barricade, so we all knew, barricade, barricade down. And we all started pushing tables,” she said.

Isabel Flores told WJBK, a local FOX affiliate, that she and other students heard gunshots and saw another student bleeding from the face. They ran from the area through the rear of the school, said Flores, a 15-year-old ninth grader.

Robin Redding, the parent of a 12th-grader at the school, said her son stayed home on Tuesday. She said he had heard threats of a shooting at the school.

“This couldn’t be just random,” she said. “He just said that ‘Ma I don’t feel comfortable. None of the kids that we go to school with are going today.’”

Redding expressed concern with school safety in general and did not provide specifics about what her son had heard.

Throne said the school doesn’t have metal detectors and didn’t believe there had been discussions about that in the past. McCabe said authorities knew how the student brought in the weapon to the school but did not elaborate.

The identities of the victims were not immediately released.

The school was placed on lockdown, with some students sheltering in locked classrooms. They later were ushered to a parking lot of a nearby store after police secured the school and took the suspect into custody. Parents were told they could pick the students up at a nearby community center, the school district said. 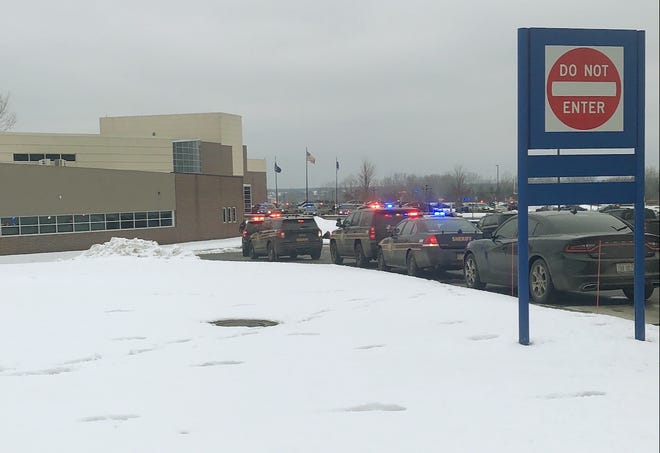 Oxford Community Schools said all other schools in the area were on lockdown for safety purposes.

A host of emergency vehicles were parked on the snow-covered lawn Tuesday afternoon. Live streams from local TV news showed multiple medical helicopters landing at the school. At least one person was loaded into a helicopter around 2:30 p.m.

Michigan’s governor, Gretchen Whitmer, was one of several elected officials who expressed condolences to the victims.

“Gun violence is a public health crisis that claims lives every day. We have the tools to reduce gun violence in Michigan. This is a time for us to come together and help our children feel safe at school,” Whitmer said in a statement.

Everytown for Gun Safety, a national nonprofit organization that pushes for stricter gun control, said the last several months of 2021 have seen the largest numbers gunfire on school grounds and people shot since the organization started tracking such incidents in 2013.

The organization said September and October were tied for the most incidents recorded in a month with 32 incidents.

Across the country, there have been at least 651 mass shootings this year — defined as an incident where four or more people are shot or killed — according to The Gun Violence Archive, which tracks such incidents. 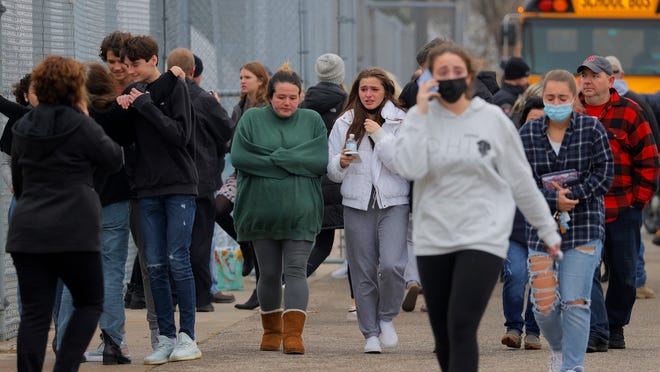