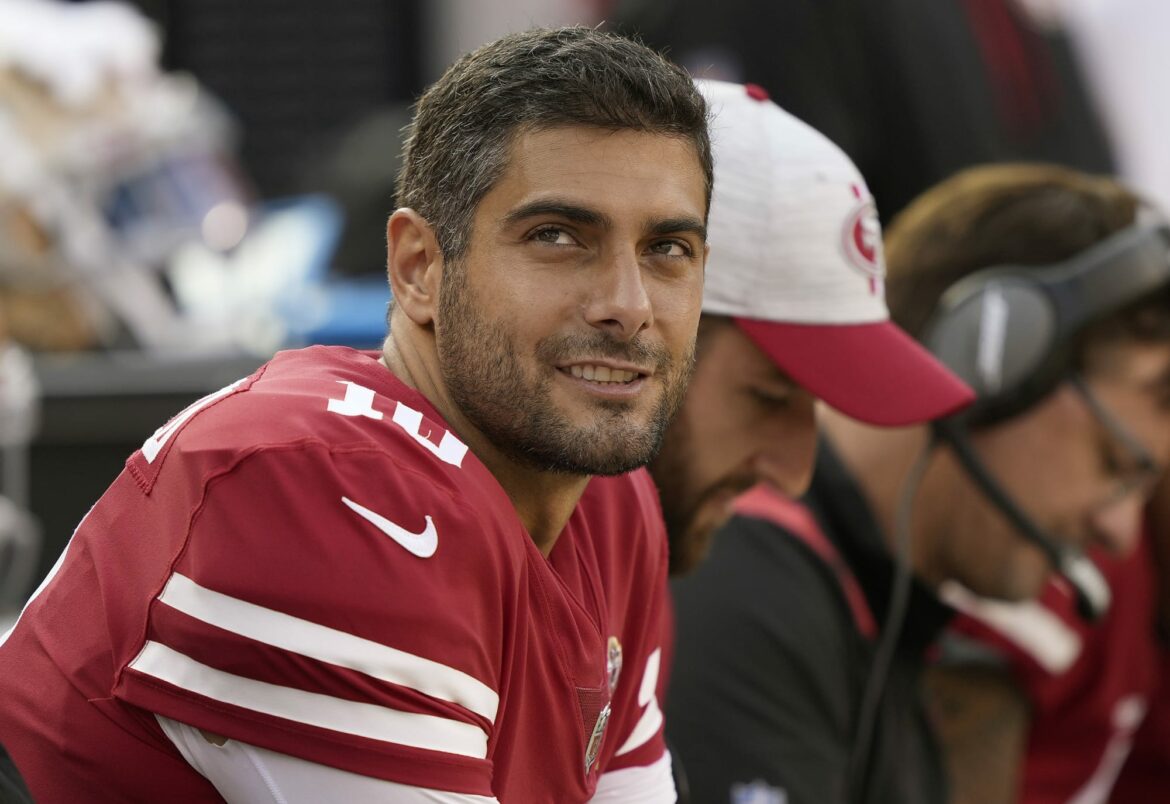 While questions abound as to who will start for San Francisco, it seems the 49ers starting lineup is becoming more clear ahead of SNF against the Colts.

It’s become a running joke that the 49ers have what can only be described as a fantasy football manager’s nightmare in their backfield: a constantly rotating cast of stealthy running backs, which seems to change unpredictably.

At quarterback, the rostering is a little more predictable: it looks like a healthy Jimmy Garoppolo will take the reins against the Colts for Sunday Night Football.

Jimmy Garoppolo looks unhindered in his return from calf injury that kept him out past 1 1/2 games before bye. Looks on target to start SNF when #49ers host #Colts.
Trey Lance (knee sprain) not practicing so Nate Sudfeld could be QB2 for 2 games in row pic.twitter.com/hReR08pmPe

In Week 4 against the Seahawks, Garoppolo suffered a calf contusion. The extent of the injury was unclear, but an MRI scan revealed that it was a calf contusion that would clear up in a couple of weeks.

It was a development that didn’t bode well for Garoppolo, who has been plagued with injury during his entire career with the 49ers. Garoppolo said the injury-rehab cycle was getting “real old” in his fifth season with San Francisco.

“It sucked,” Garoppolo said after the Seahawks game. “I mean, just in between series, I could feel it tightening up and everything. I thought I could gut it out, tried to for the first half but it’s just tough, man. I don’t know. Been in this situation too many times, it’s getting real old. So, just one of those things that’s part of the business.”

The injury also opened the door for Trey Lance, the only one of the top five rookie quarterbacks who isn’t starting for his team. Garoppolo returns as Lance recovers from his own injury, a knee sprain suffered during Week 5. Lance wasn’t practicing on Monday as a result of the injury.

With Lance out at the moment, Garoppolo’s injury insurance will be Nate Sudfeld instead.

The injury updates have the 49ers quarterback room looking like its running back room, but hopefully Garoppolo and Lance will soon return to their best form for a fair battle for the quarterback position.

Before anybody freaks out: Kyle Shanahan a week ago expected Jimmy Garoppolo to be back this week and wasn’t sure if Trey Lance would need one week or two.

But it seems Garoppolo will win this battle for the years to come — after all, the 49ers apparently picked him over a chance at Tom Brady.