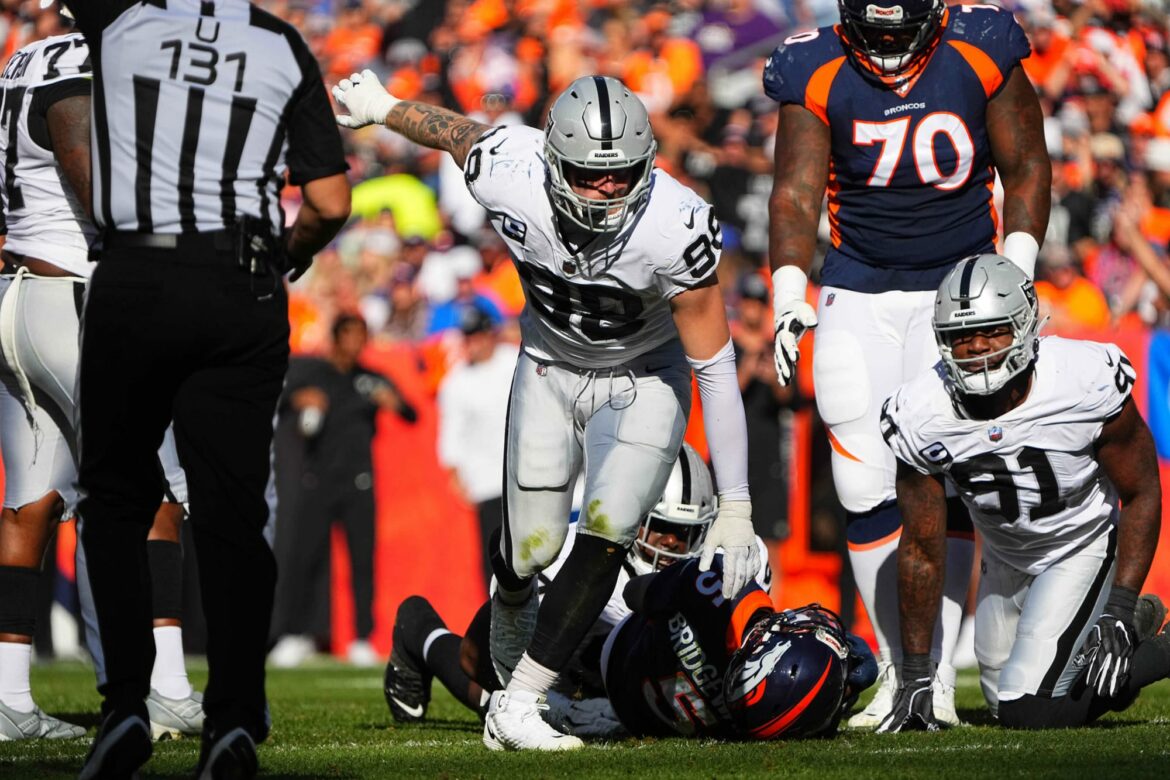 The Las Vegas Raiders will host the Philadelphia Eagles in their Week 7 matchup.

Against all odds, the Las Vegas Raiders not only went out and win on the road, but they did so convincingly over the rival Denver Broncos.

The Raiders were thrown into the crossfire of the Jon Gruden email scandal that cost their former head coach his job. With special teams coordinator Rich Bisaccia taking over in the interim, the Silver and Black improved to 4-2 by handing Denver its third loss in a row. With a very beatable Philadelphia Eagles team coming to town on Sunday, the Raiders could very well get to 5-2.

Here are five things that are absolutely going to happen on Sunday in the Eagles at Raiders game.

Historically, the Raiders have been a cornerstone of greatness when it comes to special teams play. While they have had so many excellent specialists don the Silver and Black, the Raiders seem to have one of the better up-and-coming kickers in the game in Daniel Carlson. He was a an SEC standout at Auburn in college, but he is turning heads with his powerful leg now firmly in the NFL.

With special teams being Bisaccia’s side of the ball, expect for guys like Carlson to play with a ton of confidence the rest of the way. Winning in Denver is no joke, and do that after the week that was for the Raiders organization was nothing short of incredible. With this game being back in Las Vegas, look for Bisaccia to lean on his kicker to drill a pair of most impressive 50-yard bombs.

Of these two long field goals Carlson is absolutely going to connect on, one will be from way downtown. While the first will be maybe a yard or two past 50 yards, the other will be closer to 60 yards out than 50. In a high-pressure situation, Carlson will connect on a huge 58-yard field goal that will have Raider Nation erupt into a frenzy. This will be the best field goal made this weekend.

Even if he misses a kick from shorter distance, these two 50-yarders will be what we remember.

With a rebuilding Eagles team coming to town, look for the Raiders’ passing attack to take flight on Sunday afternoon. After winning an emotional one in Denver, look for two of Derek Carr’s favorite targets to have a field day on this Philadelphia secondary. While other receivers may have more yards and catches, Darren Waller and Henry Ruggs III will combine for three touchdowns.

Carr’s connection with this dynamic duo will be solid all afternoon. Of these three combined touchdowns, at least one of them will be of the explosive variety. We are talking about one of these grabs going 40-plus yards to pay dirt. On that signature play of the game, Raider Nation will begin to accept that this team is getting to 5-2 on the season and the AFC playoffs may be a thing.

Since they are combining to score three touchdowns, that would indicate both Waller and Ruggs will have at least one score apiece. For that reason, it would make all the sense in the world to start Ruggs in fantasy, as Waller is already a top-tier tight end. Either way, the Raiders are going to carve up the Eagles’ secondary with the hopes it will opening up the run to close them out.

Expect for the Raiders to use the run to open up the pass on their quest to be a 5-2 football team.

After two down games during the Raiders’ brief two-game losing streak, quarterback Derek Carr bounced back in a big way vs. the Broncos defense. He completed 66.7 percent of his passes for 347 yards, two touchdowns and no interceptions. While his 12.6 yards per attempt is not sustainable, Carr will outshine his counterpart Jalen Hurts in the passing game Sunday afternoon.

Hurts will be able to fake a few plays, mostly with his legs, but Carr will be the superior quarterback in this one. Though Hurts may be able to lead the Eagles to a few scoring drives, Carr will throw for two more touchdown passes over him in the ballgame. This will play a big part in the Eagles’ inability to play from behind late in the game. Hurts will have to win it with his arm.

As for Carr, he is not going to have a problem with that. This is one of those games were if Carr wants to be taken seriously as an undisputed top-10 quarterback in this league, he must assert his dominance going head-to-head against a bad Eagles team with an unproven NFL starter in Hurts, at home nonetheless. Fortunately, Carr is playing with a ton of confidence this season.

Look for Carr to have well over 300 yards passing again with at least three passing touchdowns. 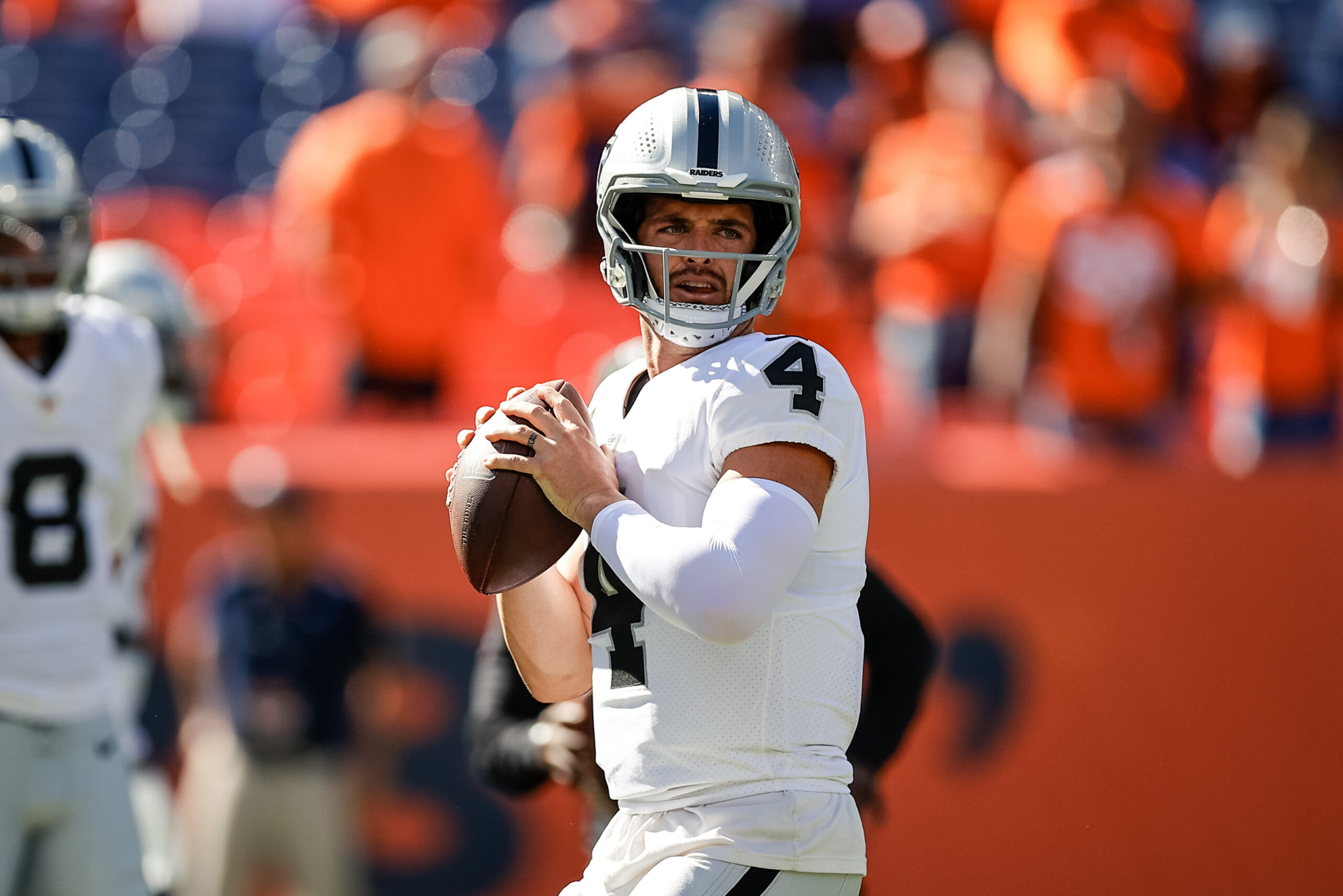 2. Josh Jacobs and Kenyan Drake will combine to rush for over 125 yards

If the Raiders going to have success the rest of the way, they are going to need to be able to lean on their running game. While the offensive line has been hit and miss, the Silver and Black still have a pair of excellent tailbacks to hand the ball off to in Josh Jacobs and Kenyan Drake. Last week saw them combine for 87 rushing yards. This week, they will look to nearly double that.

With a bad Eagles team coming to town and the Raiders playing with a ton of confidence after last week’s big win over rival Denver, look for Las Vegas to feed off the crowd all day offensively. We know that Carr is not going to have a problem moving the sticks, but the Raiders win this game going away if they can get a combined 125 rushing yards out of Jacobs and Drake vs. the Eagles.

For this to happen, both will need to get over 50 yards on the ground. Although, this could be one of those games where Jacobs takes it upon himself to get to or approach the 100-yard threshold. It is for that reason why he and Drake will combine for over 125 yards vs. the Eagles defense. If it is clearly working for Jacobs in the ground game, it means it probably will be working for Drake.

Getting back to basics with an overall balanced offense will help the Raiders keep on winning.