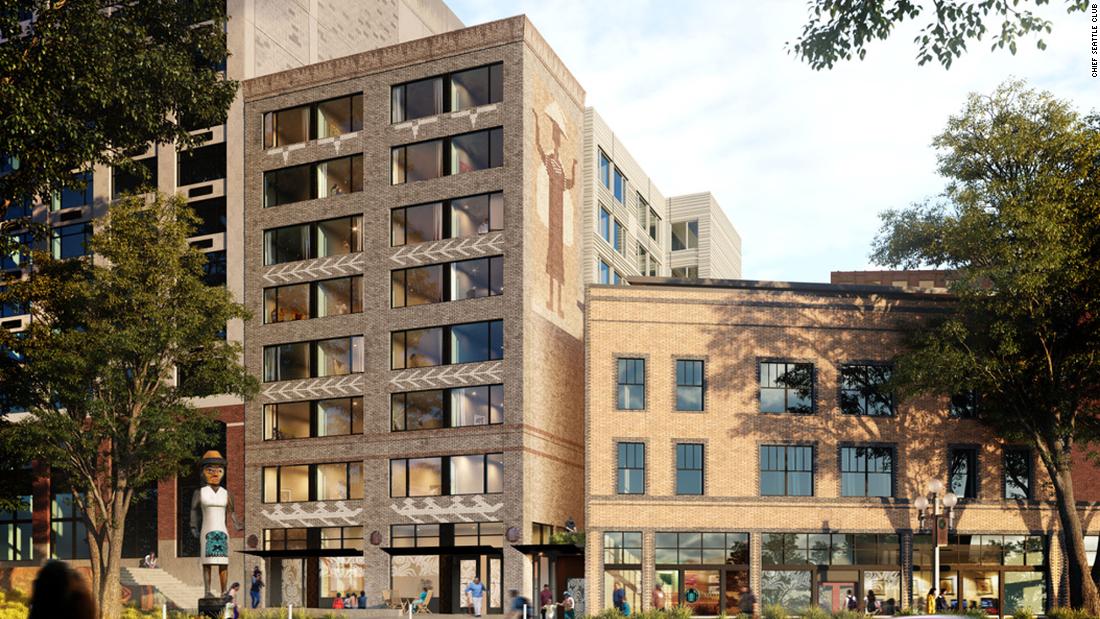 The Chief Seattle Club has opened the doors to ʔálʔal, an 80-unit apartment building reserved for low-income and unhoused urban Natives in Washington’s King County.

“Some of our Chief Seattle Club members have not had a permanent place to call home for more than a decade,” executive director Derrick Belgarde said in a statement “?ál?al is their first real home in a long time. It’s a place to live and practice their culture, to sing and bead, and gather together with other Native people.”

All of the residential units are reserved for individuals and families who make less than $40,500, or 50% of the average incoming in King County, according to the release.

Ten of the units will be held for veterans, Chief Seattle Club said.

Designed by Indigenous architects, the outside of the building is complemented with brickwork layered in Native designs, while the inside boasts walls decorated in artwork created by Native artists, according to Chief Seattle Club.

The housing complex is located in Pioneer Square, known as the “heart of old Seattle,” according to the city website.

“?ál?al is on Native land,” said Belgarde. “To have this place restored to Native people is really powerful.”

‘It gives me a chance to dream again’

There are an estimated 12,000 unhoused people living in King County, 10% of whom are American Indian or Alaskan Native, according to Chief Seattle Club, “the highest poverty rate of any racial group.”

Despite making up only 1% of King County’s population, American Indians and Alaskan Natives make up 32% of its homeless population, the release said.

“Centuries of policy forced Native people from their homelands and into cities,” said Belgarde. “The crisis of Native homelessness is the result of US policy.”

“It’s a crisis that needs to be addressed with culturally appropriate solutions,” he said. “The data is clear. Rates of long-term success are higher when people are served by members of their own community.”

The building is expected to house nearly 100 individuals, with each apartment costing around $200 to $300 a month, CNN affiliate KING-TV reported.

Maurro Romero is one of the new tenants of ?ál?al, which officially opened on January 24.

“It gives me a chance to dream again and to believe in myself,” Romero said. “[It’s] a new beginning and a new adventure, a place where you are accepted for who you are.”

For fellow tenant Ashton Kellogg, who works as an actor and producer, ?ál?al is the first place he has been able to call his own, KING-TV reported.

But it means a lot more than that to Kellogg and his community.

“It’s important, because it’s culture, and the culture here is dying,” Kellogg told KING-TV. “Helping the Natives have the art teacher or art studio they can go, the carver who wants to carve for kids. Imagine we had a space, imagine the city gave Pioneer Square to the Natives and we have powwows on the strip there and that would be a tourist attraction from all across the world.” Along with affordable housing units, the 9-floor building includes health care and social services that will serve more than 2,700 people every year, according to Chief Seattle Club.

The clinic, run by the Seattle Indian Health Board, will feature six exam rooms, a pharmacy and a traditional healing space where people can receive “medical, dental, pharmacy, behavioral health, and traditional medicine services,” the club said.

There will also be a cafe in the building that serves food from Native businesses and roasters, according to the release.

“Our relatives on the street are living in survival mode,” Belgarde said. “We need housing to help people find stability. Once they have that, we can bring them ceremony and they can begin to heal.

“We celebrate this opening, but there’s more to be done.”