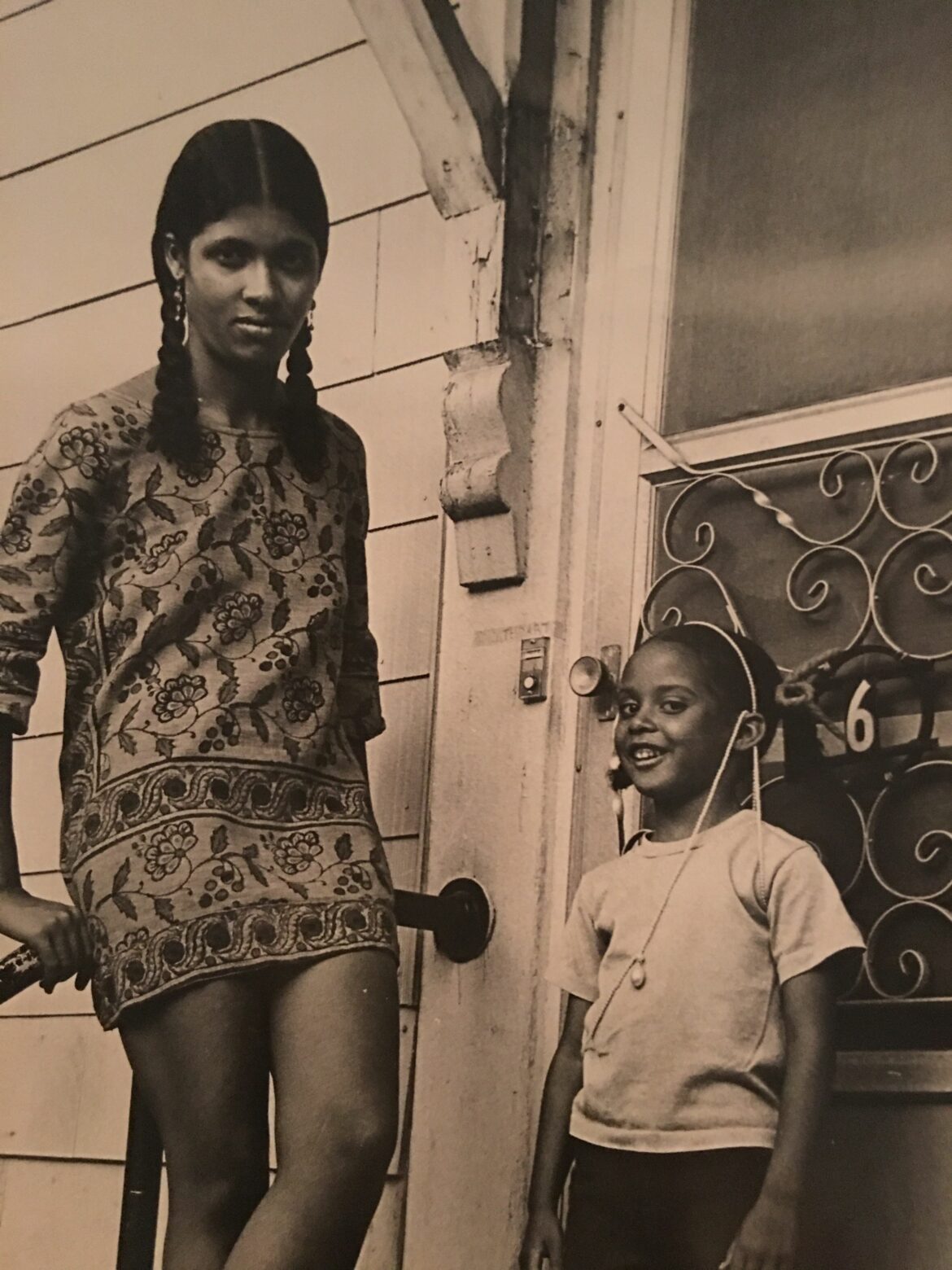 I arrived in my striped OshKosh overalls for my first day of my new Cambridge, Massachusetts, school holding my mother’s hand. Earlier that morning, she had brushed Alberta V05 into my shoulder-length hair until it shone and then fashioned it into two thick braids.

At first glance, it looked as though instead of a school, I might have stumbled on to the set of “The Brady Bunch.” All around me were girls in bright tops, flowered bell bottoms, mini dresses and white tights. The next thing I noticed was their hair, silky shades of waist-length brown and blond tresses cascading down from center parts everywhere I looked.

All of the faces I saw were white, including the kids, including the parents, including the teachers. I remember looking up at my mother’s brown face for reassurance and feeling her squeeze my hand. The look in her eyes seemed to say, “Wait for it.”

Moments later, a Black woman in a dashiki strode into the room. She was brown, browner than both me and my mom put together. The color some Black people call “original” brown, like brown crayons or chocolate. She had full lips that matched her skin exactly and wore her natural hair in a large afro. The moment she entered the room, you could feel the molecules in the air rearranging themselves. The teachers stood a bit straighter, those chatty white parents got quiet one by one, and cautioned their kids with their eyes to do the same. Before she even opened her mouth you understood that this woman was important. All of the energy in the room was suddenly funneled toward her and she seemed entirely comfortable with that.

She looked at all of us, but stopped when her eyes found mine. Her sudden smile was dazzling, mesmerizing, like a shooting star, like the sun.

“Hi, I’m Principal Jackie Scott,” she said, addressing us all. “But you can call me Jackie.”

During the infamous summer of 2020, our nation started scrambling. Educational search firms scoured their lists for candidates of color, the demand for corporate DEI consultants skyrocketed and everyone from your corner mom and pop store to your favorite show grappled with what is now widely known as “the diversity dilemma.”

But even after spending millions on diversity efforts, 91% of film studio heads are white, while Black people account for only 0.8% of CEOs and make up less than 10% of higher education professionals. It’s not enough to have people from marginalized groups working in your company or organization. Diversity at the leadership level is crucial in order to ensure equity at every tier and normalize Black and brown people as key decision-makers.

And while I’m slightly heartened to see that at least some effort is being made, the fact is that hiring Black is, like the hashtag (#blackhires), trending. Which means that while hiring Black folks to fill vacancies in our nation’s C-suites may be in fashion, if we remember our history, it is also temporary. And while right now there may be more opportunities for us Black folks, we understand that this newly opened window will be closing soon once again, and many of us are scrambling to be inside when it does.

“Why aren’t we putting more of our significant resources toward making sure that every member of our country’s population is represented at all levels?”

Former Miami Dolphins head coach Brian Flores, who was recently fired, alleged in a lawsuit that he was duped into participating in a sham head coach interview with the New York Giants. In the 58-page class-action suit, Flores says the Giants had already made their choice before his interview and offered the position to someone else. He filed the lawsuit not against the Dolphins, not against the Patriots, but against the entire NFL on the basis of discrimination.

Now, I don’t really follow sports, but I know that this is much bigger than football. Coach Flores is willingly and knowingly risking his coaching career to call attention to the importance of diversity at the highest levels of any organization. And while this rage against the machine is making headlines, my fear is that it will go the way of the 13 Black former football players who sued the University of Iowa for racial discrimination in 2019 (“Who?” you might ask, which is exactly my point). I believe that Coach Flores’ case is worthy of all of our collective attention because I know that my life and the lives of my white classmates, were greatly impacted by a Black person in a position of power.

I was 12 when my family moved across the country and I had to leave my little school in Cambridge. But during the seven years as a student there, several other Black families enrolled, due in no small part to the fact that we famously had a Black head of school. Jackie Scott was a legend; she greeted every kid at the door in the morning, attended every away soccer game, and was interviewed more than once by The Boston Globe.

Eventually, I forgot to marvel at the fact that this strong, unapologetically Black woman who refused to alter the way she spoke or modulate her tone around white people was in charge. I forgot to be scared that someone might be so challenged by her hair or her attire that they would try to “take her down a peg” or call for her removal.

No matter what my white peers thought about Jackie Scott, the fact was that they spent eight hours every week day in an educational institution headed by a Black woman. This at a time when President Richard Nixon had declared war on Black people (otherwise known as the war on drugs). In neighboring Boston, Black kids were getting spit on and called nigger as they stepped off of school busses in white neighborhoods.

The American dream, that lie passed down from generation to generation, is that anyone regardless of where they’re born or what class they’re born into can be successful, provided that they work hard enough. So what conclusions can a white person come to about the intersection of race and success if they’ve never seen a Black person in power? And if Black and Brown kids never saw the Black adults in their lives wearing a tie or sitting behind a desk, wouldn’t it make sense to believe only white people can rise to positions of authority?

The example set for me by Jackie was a lasting and powerful one. Despite the messaging I got on television and our history books, because of her, it rarely occurred to me that there were limitations to what I could do or be.

Seeing Black football coaches, Black CEOs, Black congresspeople, Black senators and Black board chairpersons matters. Not just to Black and brown people, but to folks of the dominant culture as well. If all people are created equal, then where is the equity? Why aren’t we putting more of our significant resources toward making sure that every member of our country’s population is represented at all levels?

But it’s going to take more than some righteously outraged Black folks to move the needle on this issue. We need more people like Reddit’s Alexis Ohanian, who stepped down from his position on the board and called for his company to fill his position with a Black board member. And more bills such as the one that California Gov. Gavin Newsom signed into law in 2020, requiring publicly traded corporations to give people from underrepresented communities a seat at the table (the board table, that is). And more inclusion riders, the concept Frances McDormand mentioned during her 2018 Oscars speech that guarantee a certain level of diversity in casting and production staff.

During this month set aside to celebrate and acknowledge the achievements of Black people, I often think about Jackie Scott.

What would my life have been like if our principal, like all of our students, had been white? Would I have known that my brown skin was something to be proud of and my kinky hair was a crown to be worn with dignity?

While visiting the East Coast a few years ago, I stopped into that school, hoping against hope that Jackie Scott might still be there. I really wanted to tell her that because of her, I’d grown up secure in the knowledge that I too could be someone who was respected and admired, by all people. I wanted her to know that she made a difference.

Walking into the school, I was 10 years old again, but the classes, which were all visible from the hallway, were now all populated with an array of Black, brown and beige faces. The interim head of school, a young Asian woman, received me into her office and smiled when I told her my story.

She told me that Jackie had retired some time ago, but still occasionally dropped in to say hello.

“Would you mind telling her that I stopped by?” I said.

“Of course,” she replied.

“Oh, and this too. Please let her know that just by being there, not only did Jackie make it OK to be Black, she actually made it something to be both respected and admired. And for that, I will be forever in her debt.”

Do you have a compelling personal story you’d like to see published on HuffPost? Find out what we’re looking for here and send us a pitch.