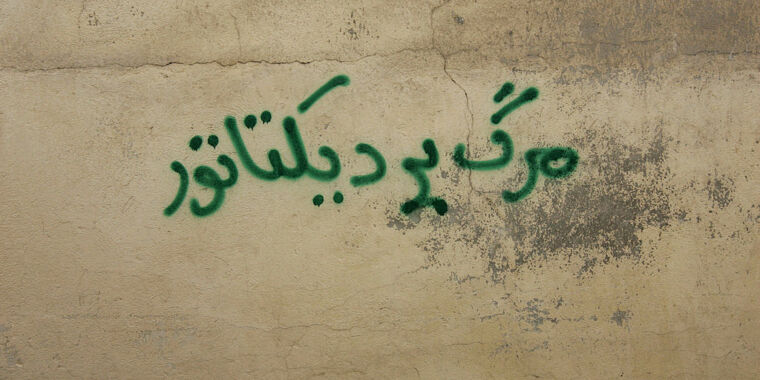 Enlarge / An anti-government graffiti that reads in Farsi “Death to the dictator” is sprayed at a wall north of Tehran on September 30, 2009.

Amid ever-increasing government Internet control, surveillance, and censorship in Iran, a new Android app aims to give Iranians a way to speak freely.

Nahoft, which means “hidden” in Farsi, is an encryption tool that turns up to 1,000 characters of Farsi text into a jumble of random words. You can send this mélange to a friend over any communication platform—Telegram, WhatsApp, Google Chat, etc.—and then they run it through Nahoft on their device to decipher what you’ve said.

Released last week on Google Play by United for Iran, a San Francisco–based human rights and civil liberties group, Nahoft is designed to address multiple aspects of Iran’s Internet crackdown. In addition to generating coded messages, the app can also encrypt communications and embed them imperceptibly in image files, a technique known as steganography. Recipients then use Nahoft to inspect the image file on their end and extract the hidden message.

Iranians can use end-to-end encrypted apps like WhatsApp for secure communications, but Nahoft, which is open source, has a crucial feature in its back pocket for when those aren’t accessible. The Iranian regime has repeatedly imposed near-total Internet blackouts in particular regions or across the entire country, including for a full week in November 2019. Even without connectivity, though, if you already have Nahoft downloaded, you can still use it locally on your device. Enter the message you want to encrypt, and the app spits out the coded Farsi message. From there you can write that string of seemingly random words in a letter, or read it to another Nahoft user over the phone, and they can enter it into their app manually to see what you were really trying to say.

“When the Internet goes down in Iran, people can’t communicate with their families inside and outside the country, and for activists everything comes to a screeching halt,” says Firuzeh Mahmoudi, United for Iran’s executive director, who lived through the 1979 Iranian revolution and left the country when she was 12. “And more and more the government is moving toward layered filtering, banning different digital platforms, and trying to come up with alternatives for international services like social media. This is not looking great; it’s the direction that we definitely don’t want to see. So this is where the app comes in.”

Iran is a highly connected country. More than 57 million of its 83 million citizens use the Internet. But in recent years the country’s government has been extremely focused on developing a massive state-controlled network, or intranet, known as the “National Information Network” or SHOMA. This increasingly gives the government the ability to filter and censor data, and to block specific services, from social networks to circumvention tools like proxies and VPNs.

This is why Nahoft was intentionally designed as an app that functions locally on your device rather than as a communication platform. In the case of a full Internet shutdown, users will need to have already downloaded the app to use it. But in general, it will be difficult for the Iranian government to block Nahoft as long as Google Play is still accessible there, according to United for Iran strategic adviser Reza Ghazinouri. Since Google Play traffic is encrypted, Iranian surveillance can’t see which apps users download. So far, Nahoft has been downloaded 4,300 times. It’s possible, Ghazinouri says, that the government will eventually develop its own app store and block international offerings, but for now that capability seems far off. In China, for example, Google Play is banned in favor of offerings from Chinese tech giants like Huawei and a curated version of the iOS App Store.

Ghazinouri and journalist Mohammad Heydari came up with the idea for Nahoft in 2012 and submitted it as part of United for Iran’s second “Irancubator” tech accelerator, which started last year. Operator Foundation, a Texas nonprofit development group focused on Internet freedom, engineered the Nahoft app. And the German penetration testing firm Cure53 conducted two security audits of the app and its encryption scheme, which draws from proven protocols. United for Iran has published the findings from these audits along with detailed reports about how it fixed the problems Cure53 found. In the original app review from December 2020, for example, Cure53 found some major issues, including critical weaknesses in the steganographic technique used to embed messages in photo files. All of these vulnerabilities were fixed before the second audit, which turned up more moderate issues like Android denial-of-service vulnerabilities and a bypass for the in-app auto-delete passcode. Those issues were also fixed before launch, and the app’s Github repository contains notes about the improvements.

The stakes are extremely high for an app that Iranians could rely on to circumvent government surveillance and restrictions. Any flaws in the cryptography’s implementation could put people’s secret communications, and potentially their safety, at risk. Ghazinouri says the group took every precaution it could think of. For example, the random word jumbles the app produces are specifically designed to seem inconspicuous and benign. Using real words makes it less likely that a content scanner will flag the coded messages. And United for Iran researchers worked with Operator Foundation to confirm that current off-the-shelf scanning tools don’t detect the encryption algorithm used to generate the coded words. That makes it less likely that censors will be able to detect encoded messages and create a filter to block them.

You can set a passcode needed to open Nahoft and set an additional “destruction code” that will wipe all data from the app when entered.

“There has always been a gap between communities in need and the people who claim to work for them and develop tools for them,” Ghazinouri says. “We’re trying to shrink that gap. And the app is open source, so experts can audit the code for themselves. Encryption is an area where you can’t just ask people to trust you, and we don’t expect anyone to trust us blindly.”

In a 2020 academic keynote, “Crypto for the People,” Brown University cryptographer Seny Kamara made a similar point. The forces and incentives that typically guide cryptographic inquiry and creation of encryption tools, he argued, overlook and dismiss the specific community needs of marginalized people.

Kamara has not audited the code or cryptographic design of Nahoft, but he told WIRED that the goals of the project fit with his ideas about encryption tools made by the people, for the people.

“In terms of what the app is trying to accomplish, I think this is a good example of an important security and privacy problem that the tech industry and academia have no incentive to solve,” he says.

With Iran’s Internet freedom rapidly deteriorating, Nahoft could become a vital lifeline to keep open communication going within the country and beyond.