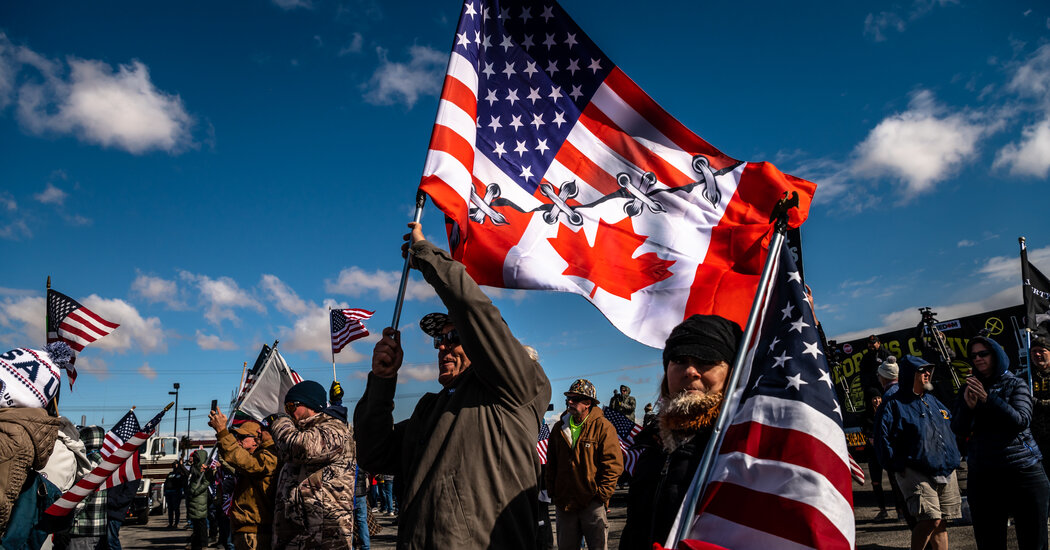 Two hours northeast of Los Angeles, Adelanto is known chiefly for its prisons. Gabriel Reyes, the city’s part-time mayor — a Republican who operates a small currency trading and marketing business — said the city-owned stadium, which once hosted minor league baseball, is little used except for an annual cannabis festival, “Kushstock.”

“I didn’t see us making beaucoup bucks off of this,” he said, “but if they all want to fill up at our Arco station and we get that California tax, then hey, we’re going to say, ‘Thank you!’”

On Wednesday, the mayor’s wife sang the national anthem for the truckers before they departed for their next stop, Kingman, Ariz. Speakers at the rally included Dr. Pierre Kory, a vocal advocate of the discouraged use of the anti-parasitic drug ivermectin as a Covid-19 treatment, and Pastor Rob McCoy, a Republican politician and Southern California evangelical leader who has gained prominence flouting pandemic rules and calling the state’s governor, Gavin Newsom, “Governor Newssolini.”

Ms. Dundas, who emceed the event, said, “It’s been two years, and it is time to open this darn economy with no more restrictions on it.”

A list of organizations supporting the convoy included those led by Robert F. Kennedy Jr., a leader in the anti-vaccine movement, and Gen. Michael Flynn, the former Trump administration national security adviser.

That latter group, the America Project, has combined its attempts to challenge Covid-19 policies with the relentless promotion of pro-Trump election conspiracy theories. The group is run by Patrick Byrne, the former chief executive of Overstock.com who, with General Flynn, was central in a bizarre plot to persuade the former president to use the military to seize voting machines in a bid to stay in power.