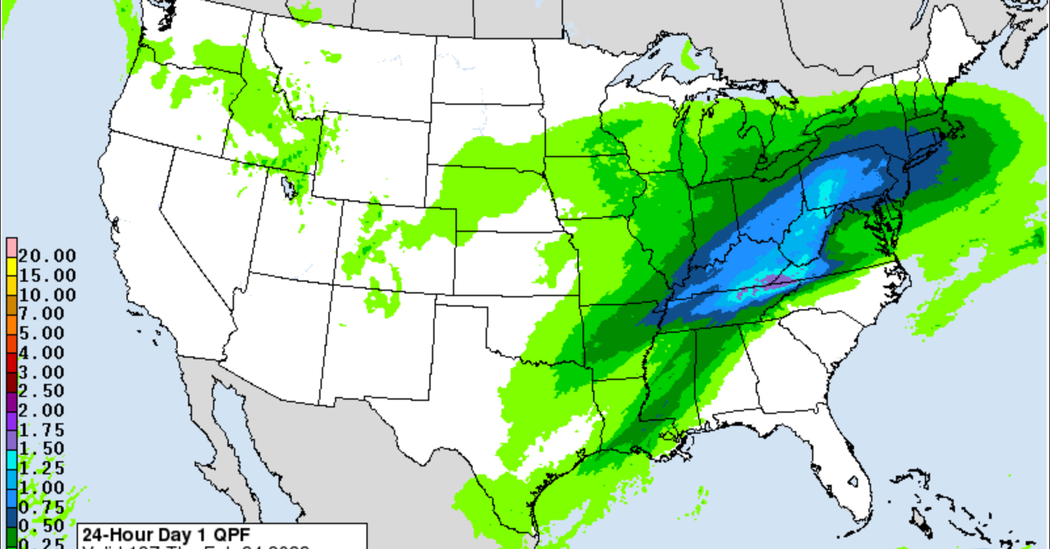 A significant winter storm began to batter the Southern Plains up to the Ohio Valley on Thursday night before it was expected to move over the Mid-Atlantic and Northeast regions on Friday, creating dangerous travel conditions and raising the risk of widespread power outages, meteorologists said.

More than 118 million people from Texas to New England were under a winter storm warning or a winter weather advisory on Thursday afternoon. About seven million people along the Tennessee and Ohio Valleys were under a flood watch because of expected heavy rain from the same weather system.

James Connolly, a meteorologist with the National Weather Service in New York, said on Thursday that the system would bring a mixed bag of weather to the New York region.

The forecast was more severe farther north. Heavy snow, at a rate of an inch an hour, was predicted for upstate New York and most of New England on Friday, the National Weather Service said. The Albany, N.Y., region could get up to one foot of snow, while similar totals were expected around Boston and Burlington, Vt.

Before moving into the Northeast, the storm was expected to bring heavy ice to the Southern Plains, parts of the Mississippi Valley and portions of the Mid-Atlantic through Thursday night, paving the way for possible widespread power outages, tree damage and dangerous travel conditions.

Ice glazing greater than a quarter of an inch was likely across the Ozarks and southeast Missouri, forecasters said. Locally, about half an inch of damaging ice was possible while freezing rain was forecast from the eastern Ohio Valley through the Mid-Atlantic. Significant ice accumulation was possible in pockets of Maryland and Pennsylvania, where the National Weather Service in Pittsburgh issued an ice storm warning on Thursday.

Freezing rain was also expected from the eastern Ohio Valley through the Mid-Atlantic States.

The storm system was expected to cast a chill across the country, except in the Southeast, the National Weather Service said. Record low temperatures were possible in California, western Oregon and western Arizona.

Weather conditions appeared to be relatively calm for Thursday in other parts of the country, with the Northern Plains under a wind chill advisory and the Southeast under a dense fog advisory.

The East Coast has been under an active weather pattern this winter.

In early January, back-to-back storms created perilous driving conditions in the Mid-Atlantic and Northeast, including one weather system that stranded hundreds of drivers on Interstate 95 in Virginia for more than 24 hours. The storm trapped truckers, students, families and every stripe of commuter, including Senator Tim Kaine.

In mid-January, another storm slammed the South, killing at least two people and leaving thousands without power before moving north and dropping heavy snow over parts of the Northeast and Canada. Another January storm swept through the East Coast, prompting thousands of flight cancellations and pushing the governors of New York and New Jersey to declare states of emergency. That storm dropped more than 30 inches of snow in parts of Massachusetts.

While some may be hoping that this week’s storm could finish off the winter season, Mr. Connolly warned people not to put away their shovels.

“March tends to be quite stormy,” he said. “We couldn’t say this is the last one.”