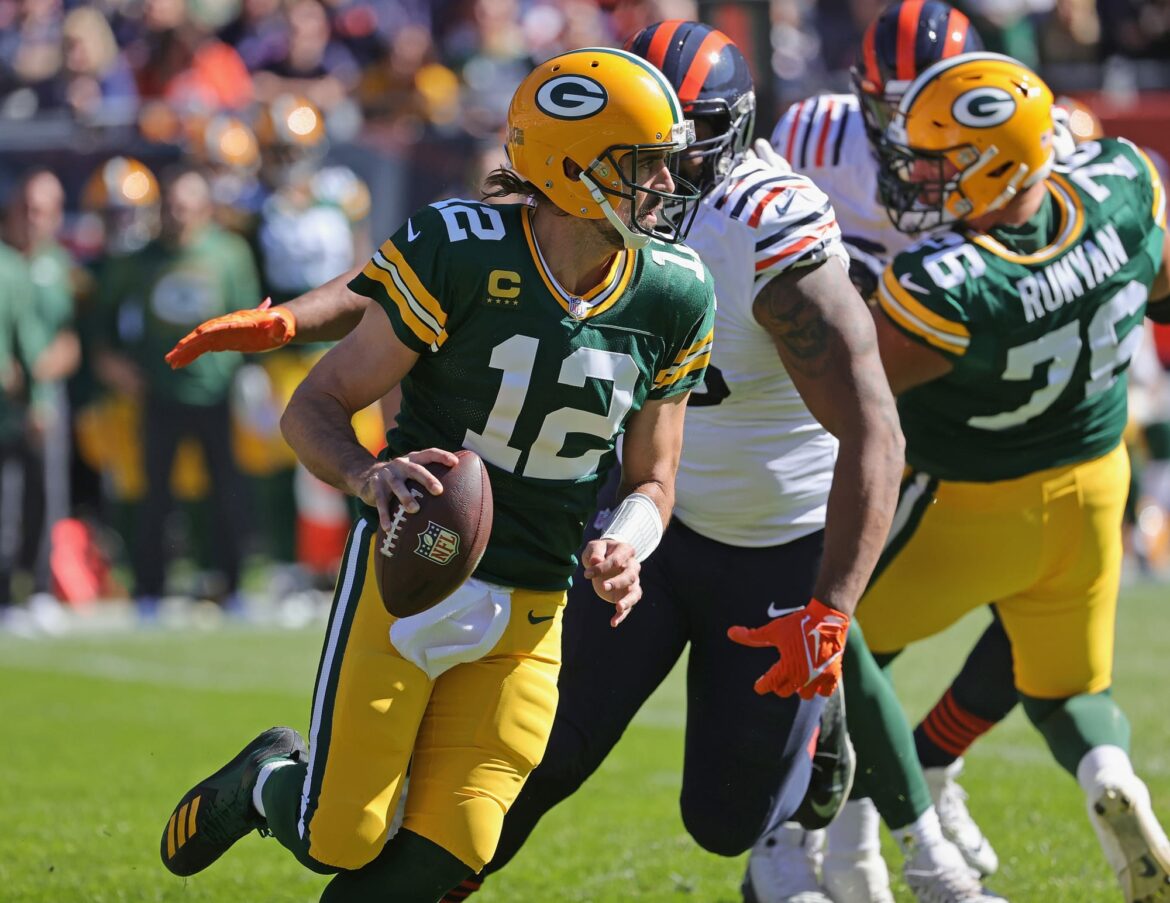 CHICAGO, ILLINOIS – OCTOBER 17: Aaron Rodgers #12 of the Green Bay Packers is chased by Akiem Hicks #96 of the Chicago Bears at Soldier Field on October 17, 2021 in Chicago, Illinois. The Packers defeated the Bears 24-14. (Photo by Jonathan Daniel/Getty Images)

Green Bay Packers signal-caller Aaron Rodgers owns the Chicago Bears and he’s not going to apologize for that fact.

Whenever Aaron Rodgers and the Green Bay Packers take on the Chicago Bears, the future Hall-of-Fame signal-caller is ready to put on a show. Historically, Rodgers has dominated his NFC North rivals time and time again.

Earlier this year, Rodgers even told Bears fans that he still owns them. Even Matt Nagy was annoyed by that, but the fact of the matter is that Rodgers always shuts people in Chicago up. You know what, he’s not going to apologize for that either.

Rodgers stresses his “I still own you” comment was to Bears fans & doesn’t know if he’ll hear from players Sunday.

“At some point, what I said will be used against me. … But I have no regrets for saying what I said and obviously I think the record kind of speaks for itself.” pic.twitter.com/JQ8URuwQvk

Rodgers isn’t kidding when he says that his record against the Bears speaks for itself. Rodgers is 22-5 against Chicago (including playoff matchups) and he’s 11-3 at Soldier Field. Even in those tough conditions on the road, Rodgers often finds a way to get things done.

Despite playing with a fractured toe, the superstar quarterback continues to play like one of the best guys in the game. It’s been so special to see for the Green Bay faithful, especially after all the drama between Rodgers and the front office during the offseason.

Come Sunday night, Rodgers will be ready to try and record win No. 23 against the Bears. Nagy and some of the Chicago players might be frustrated with Rodgers being so cocky about things, but hey, they can silence him by recording a win at Lambeau Field.

That’s going to be quite the tall task, however, as Green Bay is considered a heavy favorite for this one. The expectation is that Rodgers will keep smiling from start to finish in this one. It might be wise for Bears fans to plan to do something else on Sunday. It could be a long day for their squad.