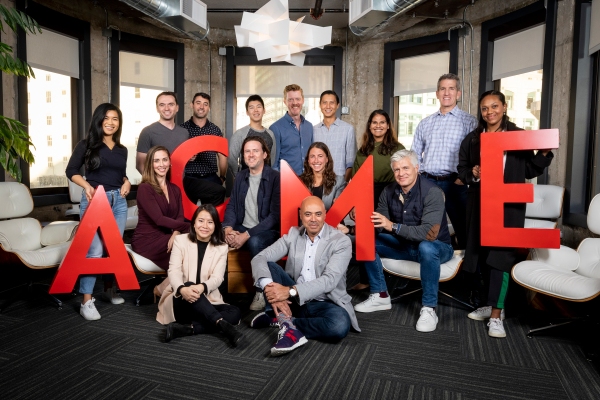 The money is significant given that the outfit’s last fund closed with $181 million in commitments in 2019 — not that ACME has been lacking money to plug into startups. On the contrary, Standford and Nada say they also invested $155 million in “three or four” startups last year through special purpose vehicles (SPVs) — akin to pop-up venture funds with a specific investing target in sight — and that they have invested $1 billion over the years in companies using SPVs.

Asked which companies received this capital, the two declined to specify, saying only that the recipients are within their portfolio.

That the two came together owes to some serendipity. They say they met roughly 16 years ago, when Stanford worked in investment banking at Goldman Sachs and Nada was a managing partner with the cross-border firm GGV Capital, which he cofounded in 2000. Hany was on the board of Glu Mobile, a mobile gaming company that more recently sold to Electronic Arts; Stanford was trying to understand Glu to help Goldman with its broader approach to internet businesses in a post-dot-com world.

The friendship stuck. And when Stanford was forced to part ways with an earlier business partner — Shervin Pishevar, with whom Stanford had partnered on an earlier iteration of ACME called Sherpa Ventures, and who became engulfed in numerous sexual harassment allegations —  Stanford reached out to Nada to regroup and move forward.

Together with Alex Fayette and Aike Ho, two colleagues who were just promoted to partner, the team has focused on a wide variety of startups in what Stanford calls their off-Broadway strategy, even while some of their focus seems center stage for many investors right now.

One of ACME’s current investments, for example, is the young blockchain gaming startup Forte, which has now raised $910 million from investors, including via a whopping $725 million Series B round that closed in November.

Another is Brightside Health, a telemedicine company for depression that closed on $24 million in Series A funding last May.

Altogether, say the partners, over the past three years, 60% of the firm’s investments have been into companies that have at least one non-male and/or non-white founder. To underscore how far ACME has moved from its roots, they also stress that ACME is itself diverse, with 68% of its employees non-male, non-white, and/or members of the LGBTQ community.

As for how much they are investing and when, Stanford describes the firm’s “sweet spot” as “that late seed, Series A” stage, while Nada notes that the firm has written checks as small as $1 million and as big as $15 million. They also say they are willing to collaborate but prefer to lead a deal where possible.

“The last thing we want to do is elbow anybody, that’s not our strategy,” explains Stanford. “If there is a seed or late seed [round coming together] and a founder would love to have us in early, we’ll put a million bucks, we’ll put half a million bucks, but . . what we’re really looking to do is write that $5 million to $10 million check, take a board seat,” and hang on for the ride.

Another of its bets, the dog-walking outfit Wag, announced yesterday that it intends to go public by merging with a blank check company, too.

At an expected combined value of $350 million, Wag will be worth slightly less than it raised from a single investor — SoftBank — back in 2018, when the Japanese conglomerate investor wrote Wag a $300 check at a $650 million valuation. Indeed, it was a bit much for the young company — which had been looking to raise $75 million —  to absorb at the time, and Wag later ran into trouble, conducting layoffs and buying back half of SoftBank’s stake.

IonQ and Astra have meanwhile seen their share prices fall considerably from their peaks, but both Stanford and Nada say that they are very bullish on the future of both companies, as well as DraftKings, another portfolio company that, in April 2020, also went public through a special purpose acquisition company (SPAC) and whose shares are currently worth slightly less than one third what they were worth roughly a year ago at their high point.

Nada, who sits on the board of DraftKings, attributes part of the uneven performance the companies’ shares on shifting investor sentiment. “The public market tends to be fickle. A year ago, they were looking for growth . . . now they’re looking for profitability.”

But both firm leads say they remain bullish on SPACs more generally. “You can say what you want about SPACs and all the fees and how bankers are making out like bandits and sponsors aren’t adding much value — all those stones that people throw,” says Stanford. “But at the end of the day, you’re getting more supply out to public investors that otherwise historically has just been held back behind the curtain and [whose] growth investors have been absorbing all the alpha.”

The real question, Stanford says, is whether retail investors “should buy the IPO. That’s a decision they need to make, and frankly, [they should] probably think about it from a portfolio perspective as opposed to stock picking.”