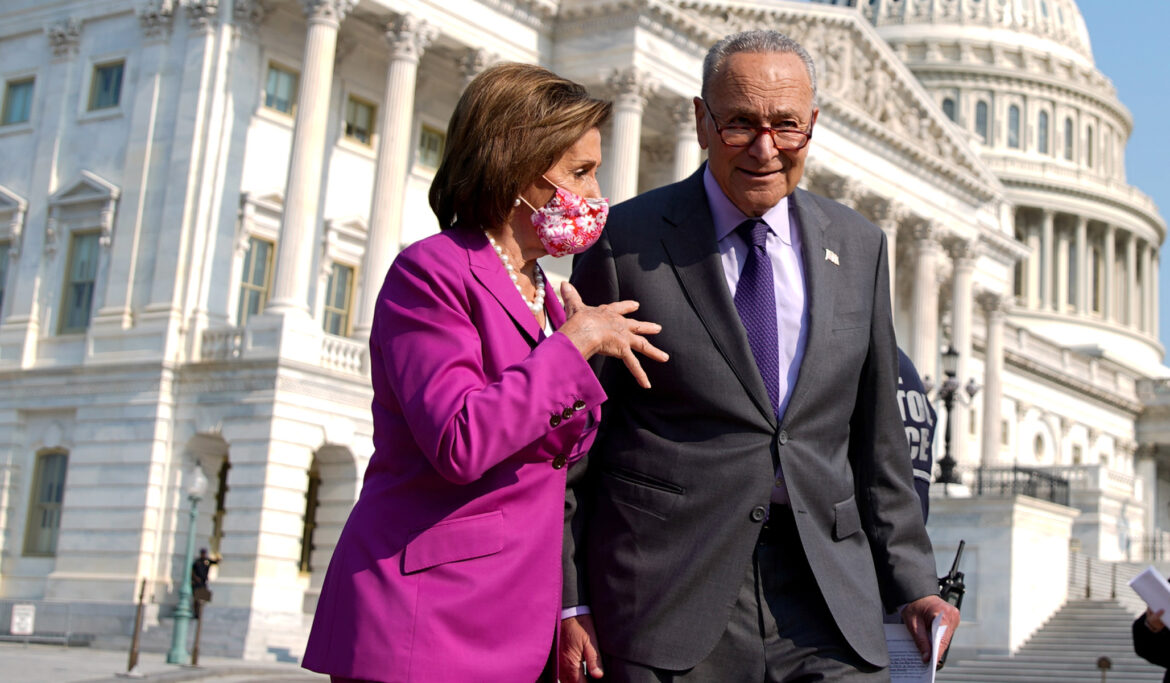 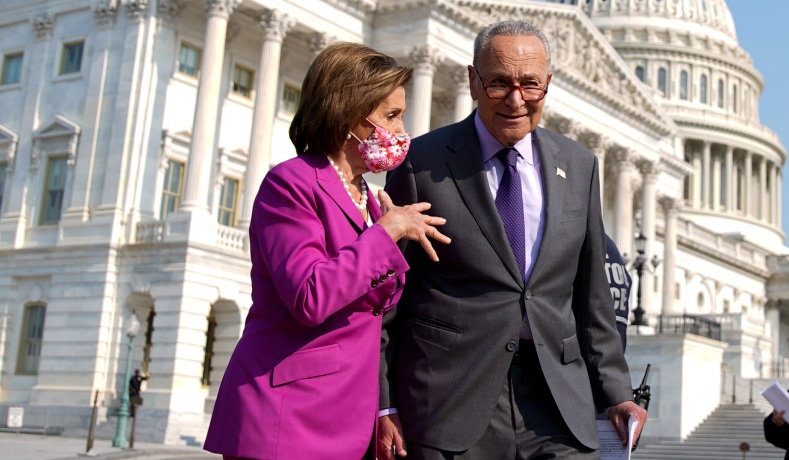 When Congress authorizes a great deal of money — follow the money. Plus, Glenn Youngkin, Aaron Rodgers, Larry David, and more.

On Friday night, when the House passed the infrastructure bill, I thought back to the presidential campaign of 2016. Hillary Clinton, the Democratic nominee, proposed a $275 billion infrastructure plan, to be carried out over five years. Donald Trump, the Republican nominee, objected to the plan, maintaining that it was chintzy: “I would say, at least double her numbers, and you’re really going to need more than that. We have bridges that are falling down.”

So, what is the current price tag?

By the way, I know people who chortle over the phrase “crumbling infrastructure.” When they hear about bridges falling down, they fall down laughing. I don’t have a firm position on this question. My main concerns are elsewhere, at the moment.

After Friday night’s vote, there was much celebration and lamentation, from the competing sides. I would like to know: Will anyone follow up on how the money’s being spent? Whether it’s doing any good? Whether it is helpful or wasted?

You know the expression “My work is done here”? That’s what spenders think when they pass a spending bill. In truth, however, the work is just beginning. Something to keep an eye on, if you can.

• I hadn’t heard these words in years: “Na na na na. Na na na na. Hey hey. Goodbye.” But they appeared in a letter I published last Wednesday, on the decline of sportsmanship (a theme of mine in recent weeks). A reader had written,

I attended a Catholic high school in central Illinois in the ’70s. When our basketball team was about to wrap up a win (pretty common — we had good teams), some of our student section would start to sing, “Na na na na. Na na na na. Hey hey. Goodbye” — and our cheerleaders would immediately start waving their arms and saying, “No!” I don’t think our fans even got to “Hey hey” before their singing died out. Same thing would happen if they tried to boo a call. I probably didn’t appreciate that enough back then.

Well, on Friday night, I saw this, in a report from Politico: “. . . a rowdy group of Republicans taunted Democrats by singing across the chamber floor a lyric synonymous with schoolyard defeat: ‘Na na na na,’” and so on.

The report went on to say, “Democrats had mocked Republicans with the same chant in 2017, a year before the GOP lost the House after failing to repeal Obamacare.”

Maybe the lyricist should get royalties?

• I thought that Abigail Spanberger, the Democratic congresswoman from Virginia, and former CIA officer, made a smart comment about President Biden: “No one elected him to be FDR. They elected him to be normal and stop the chaos.”

• “Defund the Police” was a pretty nifty slogan. What will follow it? “Pollute the Rivers”? “Mandate Skim Milk”? “Bring Back Polio”?

(I apologize to lovers of skim milk. À chacun son goût, and lait.)

• A headline: “Job creation roars back in October as payrolls rise by 531,000.” (Article here.) America is beset with problems — from a lingering pandemic to political dysfunction to social-media rancor. There is even serious, or semi-serious, talk of secession, of national dismantlement. But the economy is pretty robust, isn’t it?

Maybe, when a country is prosperous — prosperous and free — people look for other problems to concentrate on and magnify. Prosperity and freedom can be pretty boring, right? (Not for me. And if I know my readers — the bulk of them — not for you, either.)

• I have not mentioned AMLO, the lefty populist at the top of Mexico, lately. Let’s have a headline from the Financial Times: “Mexican president’s war on ‘neoliberalism’ moves on to campus.” (Article here.) “Neoliberalism,” you see, is an epithet in the mouths of both Left and Right — the populists and others in those camps. In view of this, maybe there’s something positive to say about “neoliberalism”?

(In America, it used to be that this ism was associated with Charlie Peters and a few of his closest friends. But that’s a long story, which I’ve told before, and which I will not pause for today . . .)

• There was a gubernatorial election in Virginia. Glenn Youngkin, the Republican, beat Terry McAuliffe, the Democrat. Two days later, the incumbent governor, Ralph Northam, a Democrat, hosted the governor-elect in the executive mansion. I thought this was a reassuring example of American normality.

A year ago, President Trump refused to meet with the president-elect, breaking tradition. He also refused to attend the inauguration.

Normality may be boring (like peace and prosperity?). But there’s something to be said for it. (This, as you know, is a deeply conservative sentiment.)

• Kareem Abdul-Jabbar, too, is interesting on the subject of vaccination — in particular, athletes and vaccination.

We are all interconnected — our fates are interwoven.

Which is why it’s so shocking and disappointing to see so many people, especially people of color, treat the vaccination like it’s just a matter of personal preference, like ordering no onions on your burger at a drive-thru.

Those who claim they need to do “more research” are simply announcing they have done no research . . .

For Kareem’s column, go here. I learned about it from another Sally Jenkins column: here.

• Sam Roberts, the veteran newsman, is an obits writer for the New York Times. He is one of my favorite writers. I’ll give you two examples of why — from a recent obit of a famed zoo man, William Conway, who was associated with the Wildlife Conservation Society.

Dr. Conway single-mindedly transformed the society’s signature attraction in the Bronx from a famous but fusty cloister for neurotic caged specimens into a collection of lush natural environments where the animals presumably felt more at home, and where visitors benefited from a more authentic educational experience.

I love that word “presumably”: “where the animals presumably felt more at home.” So intelligent.

And how ’bout this?

In recent years, the Nonhuman Rights Project, an animal-rights organization, has been pursuing a habeas corpus case to “liberate” and grant “personhood” to one of the two elephants still in the Bronx, a female named Happy, on the grounds that she isn’t.

• In the last ten, twenty years, people began to drop the word “actress” in favor of “actor.” I sometimes find this confusing. I also wonder: When will the Oscars drop the “Best Actress” category? When will both men and women compete in the “Best Actor” category?

• Dear friends of mine — a husband and wife — are retired. Both have cellphones. Hers functions as the home phone, basically. She told me, “Oh, we never use his, except to call my phone, when I can’t find it.”

I thought you might enjoy this slice of modern life.

• In an Impromptus some weeks back, I wrote,

Men will understand what I mean (trust me): You know you’re in a classy hotel when the toilet seat stays up, rather than flopping down, perilously.

A friend of mine writes, “Jay, thought of you last night while watching the latest episode of Larry David’s Curb Your Enthusiasm.” Aha! The relevant scene is here.

• YouTube thought I might enjoy a Saturday Night Live sketch from 1992: a parody on The McLaughlin Group, imagining a Japanese version. Boy, did I.

Could you get away with such political incorrectness now?

• Let’s have a little music. For the latest episode of my Music for a While — a music podcast — go here. For a review of Leonidas Kavakos (violin) and Yuja Wang (piano) in Carnegie Hall, go here. For my latest “chronicle,” in The New Criterion, go here.

• Speaking of music: In 1905, there was a hit: “Come away with me, Lucille / In my merry Oldsmobile.” They don’t make ’em anymore — Oldsmobiles, I mean. But they still roam the earth. I spotted one last week — big ol’ hunk of excellent car: 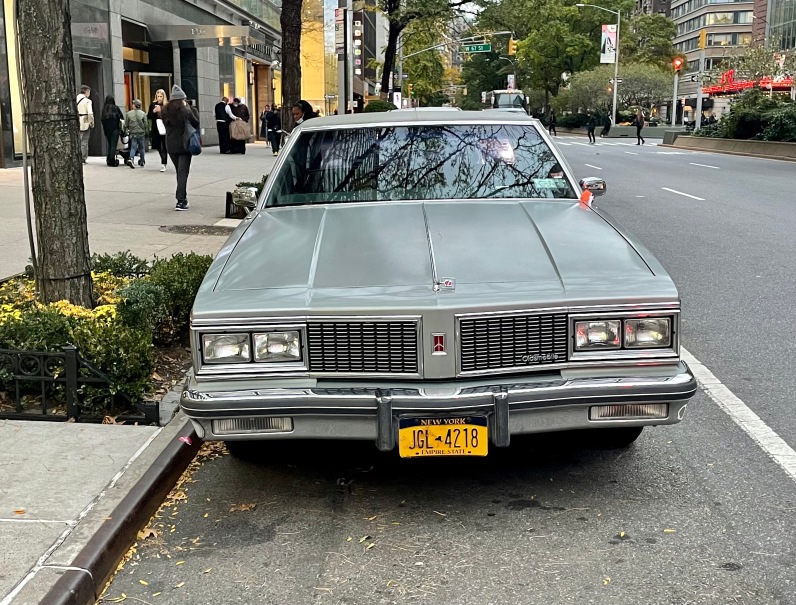 A taste of Diwali, that festival of lights, in New York? 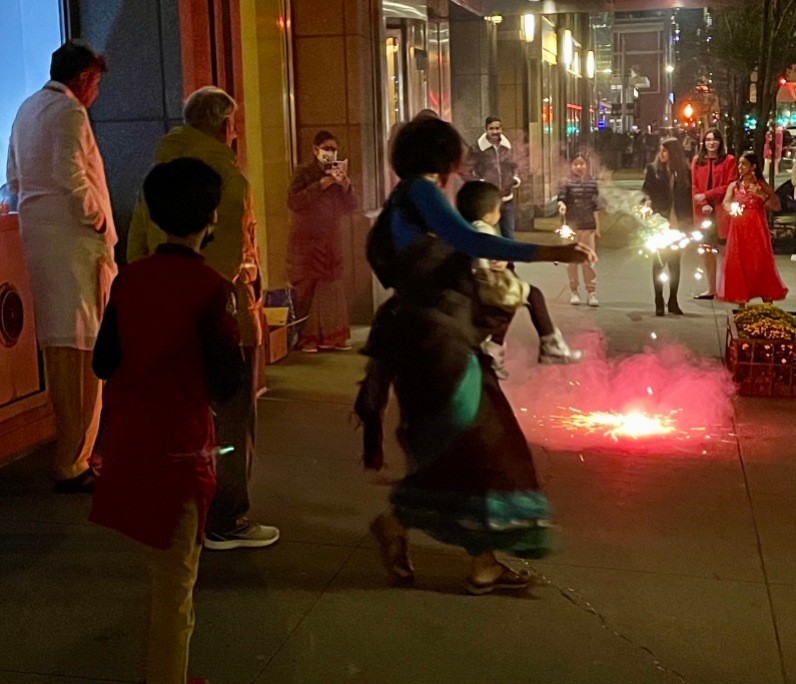 Finally, I title this one “Home on the Range” — golf range, that is. Nothing could be more peaceful than the range at twilight. If your swing is in order, that is. If it isn’t — nothing else really matters. 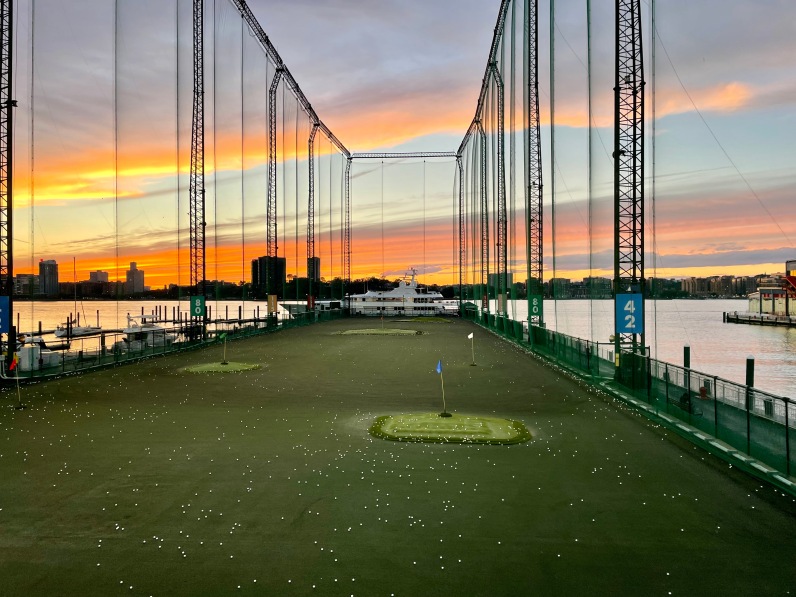 Happy Monday, my friends, and have a very good week. I’ll check you later.

If you would like to receive Impromptus by e-mail — links to new columns — write to jnordlinger@nationalreview.com.