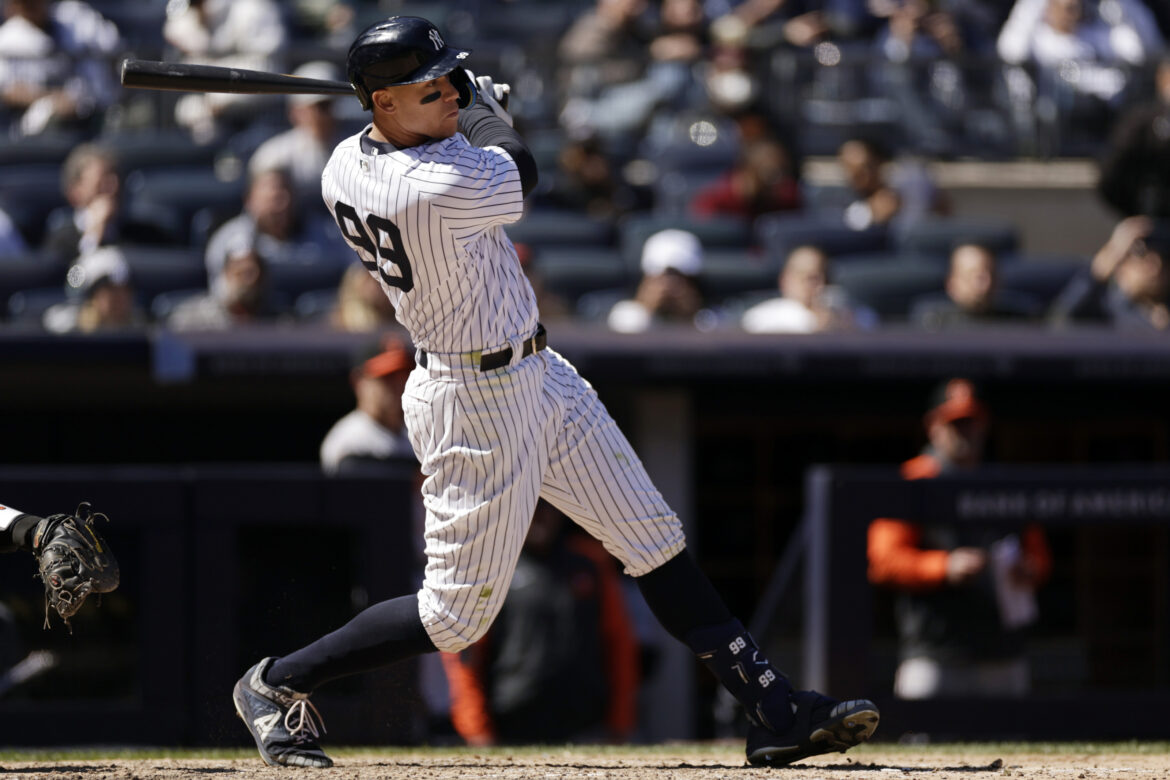 The ghosts of Yankees past are hard to miss in the Bronx, from Monument Park in center field to the 27 championship flags flying from the facade. Legendary names such as Ruth, Gehrig, DiMaggio, and Mantle once roamed this sacred ground, making Yankee pinstripes as synonymous with baseball as peanuts and cracker jacks.

But they’re nothing but memories now. Aaron Judge is the present, and the Yankees’ 6-foot-7 right-fielder is quickly etching his own name in the Yankees record book.

Judge made the most significant gamble of his career in the offseason. He bet on himself. Judge was offered a seven-year contract extension for $30.5 million per season that would’ve kept him in a Yankees uniform for the bulk of his career. He turned it down, believing that, with a great season, even bigger riches awaited him in free agency.

It’s a bet that appears to be paying off, as Judge and the Yankees have established themselves as the dominant force in the league. The 18-7 Yankees, thanks to an 11-game winning streak that only came to an end on Wednesday against the Blue Jays, currently sit 2.5 games ahead in the AL East and look every bit the contender to raise another flag at Yankee Stadium.

The Yankees currently have +1000 odds to win the franchise’s first title in 13 years, fourth in the league behind the Dodgers, Blue Jays, and Mets, according to WynnBet. Judge has the fifth-best odds to take home the AL MVP award, also at +1000.

In their fifth year under manager Aaron Boone, the Yankees are trying to end a lengthy drought of even competing for a title. For the first time in a century, before Ruth was sold to New York and baseball history changed forever, the Yankees have gone an entire decade without appearing in a World Series.

They lost to their rival Red Sox in the Wild Card game last October, a 92-win year coming to a quick and ignoble end. But Boone believes this is a better team than a year ago and expects even bigger things for the 2022 club.

“Of course, I think in every way [are we better]. I think we’re a better, more versatile offense. We run the bases better. There’s no question we catch the ball better and have a chance to be a very good defensive team this year,” Boone told YES Network on Wednesday before the Yankees’ win streak came to an end.

“Pitching was kind of our calling card last year. And yet, with that said, I feel we have a better pitching staff from top to bottom this year. In every way, I feel like we’re a much more complete team.”

What to expect from the Yankees

Judge is doing his part to power the Yankees offense. During the 11-game winning streak, Judge hit .357 with eight home runs and 17 RBI. Giancarlo Stanton added three homers and hit safely in nine of the 10 games he played during the streak. Judge and Anthony Rizzo both have nine home runs 25 games into the Yankees season. In the long, heralded history of the Bronx Bombers, only two other pairs of Yankees teammates ever had that many homers at this point in the season: Judge and Luke Voit in 2020, and Mickey Mantle and Yogi Berra in 1956.

Yankees batters have the second-most balls hit with an exit velocity of at least 100 mph this season, behind the Blue Jays. Judge and Stanton are both in the top-10 in number of hard-hit balls. But, for all the power they can unleash, it’s not the Yankees bats that have made the biggest impact on the club this season.

Michael King and Clay Holmes have combined to allow two earned runs in 31 innings. Closer Aroldis Chapman has yet to allow a run in 11 appearances. The Yankees bullpen leads the league with a 2.30 ERA and ranks in the top-10 in strikeouts per nine innings.

The starting rotation, anchored by Gerrit Cole, has managed to remain remarkably healthy and dominant. Cole, after struggling with his command through his first three starts, has pitched 12.2 scoreless innings in his last two games. Left-hander Nestor Cortes Jr, his mustache making him resemble a video game character, leads the club with a 1.82 ERA in five starts. Even Luis Severino, who’s pitched in just seven games the last three seasons, looks back to his All-Star form, his fastball touching 100 mph.

The Yankees are off to a stellar start, evoking images of some of the remarkable teams of the past. Now comes the hard part: keeping it up for the rest of the season. The winning streak came mostly at the hands of the Orioles, Guardians, and Royals, three teams unlikely to contend for a playoff spot. The Yankees have yet to play the Rays and have only played three games against the Red Sox.

There is, though, confidence in the Yankees clubhouse that this team is capable of greatness. Only six times in franchise history have the Yankees had a better record through 25 games; five of those years, they won the World Series. In the other, 2003, they lost the Fall Classic to the Marlins in six games. The only other time the Yankees had such a long winning streak this early in the season was in 1939. That Yankees club is arguably the greatest team in baseball history, winning 106 games and becoming the only team to outscore their opponents by more than 400 runs.

That was the year Joe DiMaggio won his first MVP and when Lou Gehrig delivered his “luckiest man” speech. The Yankees will always honor and revere those legends. Judge, Stanton, and the rest of the 2022 Bronx Bombers are on their way to crafting their own legend.