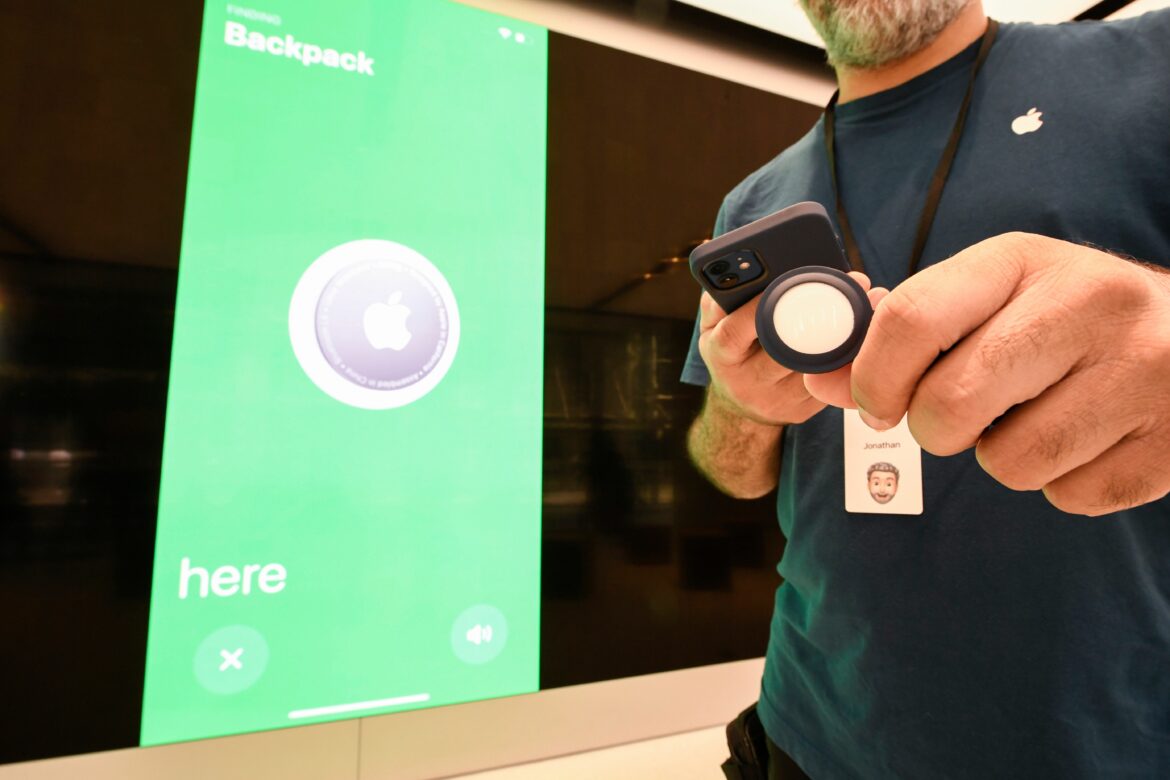 Sam, a woman in Brooklyn, was heading home from the bar she helps manage a few weeks ago when she got a notification on her phone: “Your current location can be seen by the owner of this AirTag.”

She’d never heard of AirTags, the button-sized location tracking devices Apple launched last April. The company markets them as a way to easily keep track of essential belongings, like keys and wallets, and sells them for an accessible $29 apiece, or $99 for a pack of four.

It was 1 a.m. The notifications on Sam’s phone said one AirTag device was first seen tracking her at 5:51 a.m. the day before, and a second had first been detected later that afternoon. Most alarmingly, the notifications included a map with a red line showing exactly where Sam had just walked ― from the bar to her apartment building.

A friend she called for advice helped her figure out what to look for: a round silver-white chip a little over an inch wide.

“I go through all my stuff, my bag and everything, my gym bag, jacket,” recalled Sam, who requested HuffPost not use her full name to protect her privacy.

But she didn’t see anything unusual. On her friend’s recommendation, she changed the clothes she was wearing and went back outside her apartment building, only to see the red line had tracked her movements. She and her friend both examined her phone case carefully, but still found nothing. Sam walked the streets around her apartment building and watched the red line follow her.

Across the country, women are reporting similar incidents to police and local news media in an attempt to raise public awareness that Apple’s AirTags can be hidden on cars and in personal belongings to track people without their knowledge. The stories proliferate on TikTok, and some have been posted to Reddit and Twitter.

Sometimes people find the devices, and sometimes they don’t.

A New York City model, Brooks Nader, shared her experience over Instagram earlier this year. She said she had been out at a crowded bar with her coat hanging on a chair, and was walking back to her apartment when she got a notification about an unknown AirTag device following her.

“I just want people to be aware that this exists,” she said on Instagram.

A Los Angeles woman, Ashley Estrada, posted a viral TikTok explaining how she found a device wedged between her license plate and the body of her car. An Oregon woman told a similar story.

In Philadelphia, Courtney Chandler told local news station 6 ABC that she woke up last month with the same iPhone notification about an unknown AirTag, although it appeared to have fallen off at some point in the night before she reached her home.

“What’s so scary about it is I have no idea who did this to me. I don’t know their intentions,” Chandler told the outlet.

Location tracking devices are not new. Tile also makes pocket-size trackers for keys and wallets, marketing itself as “the world’s largest lost and found.”

Apple’s network, however, is particularly powerful. AirTags are able to use the Find My network, which uses Bluetooth technology and other people’s iPhones, MacBooks and iPads ― hundreds of millions of devices, according to Apple ― to ping location signals back to the person who owns it. The process is so efficient it barely touches a device’s battery power. And because the world is already blanketed in Apple products, the location data is generally very precise.

A tracking device from LandAirSea relies on satellite GPS tracking with a monthly paid subscription. Tile also uses Bluetooth, like AirTags. But one New York Times tech reporter who tried those three different products to track her husband found that the Apple device yielded the most specific results, particularly in a metropolitan environment. (Yes, she had his permission.)

Apple has been moved to respond to concerns about AirTags multiple times in the past year; shortly after their release, The Washington Post published a story headlined “Apple’s AirTags Made It Frighteningly Easy to ‘Stalk’ Me in a Test.” This week, the company announced more new safety features while simultaneously defending the trackers.

“Since AirTag’s launch last April, users have written in to share countless stories of AirTag being instrumental in reuniting them with the things they value,” the tech giant said Thursday, giving examples that included a child being reunited with a critical medication lost on a bus.

Not all social media posts are negative, either ― one TikTok video showed the device looped onto a smiling woman’s shorts with the caption: “When your friends buy an AirTag to keep track of you at parties bc you’re always running away.”

But Apple has acknowledged that some people are using AirTags the wrong way, too.

“We take customer safety very seriously and are committed to AirTag’s privacy and security,” Apple said in a statement to HuffPost that highlighted safety features the company dubbed “a first in the industry.” The features “both inform users if an unknown AirTag might be with them, and deter bad actors from using an AirTag for nefarious purposes,” it said.

An iPhone running iOS 14.5 or later will send a notification if it detects an AirTag traveling with someone who does not own it. The notification will pop up either at the end of the day or when the iPhone detects you’ve arrived home ― which likely explains why Sam received a notification when she did. Those with Android phones can download an app, introduced in December, that lets them know about any mystery AirTags following them.

AirTags will also make noise when they are separated from their owners, which occurs at a random time between eight and 24 hours after separation. The company says the randomization helps deter bad actors. You can use your phone to force the AirTag to chirp so you can find it more quickly.

The company instructs those who find an unwanted AirTag to disable it using their phone or by taking it apart; detailed instructions can be found on its website.

A screenshot from Sam’s phone.

But as anyone who’s used Bluetooth speakers can attest, the technology can be spotty. Sam tried to follow the prompts on her phone to force the two AirTags following her to make a noise, but they were unable to connect to play the sound.

She became suspicious of a man in her apartment building whom she’d spotted watching her and following her down the street. Sam tossed her phone case ― the kind that also functions as a wallet ― in a trash can outside a bodega, and grabbed some things to go stay the night with her friend.

Her phone later showed that the AirTags had stopped following her at around 4 a.m., capping a three-hour ordeal. She suspects the phone case but has no way of knowing for sure.

“If users ever feel their safety is at risk, they are encouraged to contact local law enforcement who can work with Apple to provide any available information about the unknown AirTag,” Apple said in its statement to HuffPost.

Each AirTag has a serial number on it that can be linked back to the owner. But nothing much can be done for people who can’t find an AirTag on them.

A Mississippi woman, Amber Norsworthy, said she got a notification while at a park with her three kids, but they checked all over their belongings and found nothing.

“I think they should stop selling them for a period of time until they can work out some safety boundaries with it,” Norsworthy told the BBC last month.

The company says it regularly works with law enforcement to trace the devices, in some cases leading to charges and in others revealing a miscommunication, for example when a family member borrows a car.

“They were just very dismissive,” she said. The officers she spoke with refused to write anything down. “They were like, ‘There’s nothing to report. Nothing happened. We can’t just write a report. This isn’t like TV shows.’”

Women who spoke with The New York Times about the issue reported similarly lackluster experiences dealing with the police.

Sam ended up changing the locks on her apartment and installing a small security camera outside her door for peace of mind. The man she noticed watching her, a subletter, later moved out.

Apple announced Thursday that it had updates planned for later this year to help make the AirTags easier to find.

One such update, “precision finding,” would allow you to use your phone to see how far away the AirTag is, while another would notify users sooner that an AirTag was following them. Apple also confirmed that its AirPods have been found to prompt notifications with slightly different wording, “unknown accessory detected,” and said a future update will specify the device is a harmless pair of headphones.

Apple says it plans to show a message to people setting up an AirTag that forces them to acknowledge the devices are only for tracking personal belongings, and using them to track people without their permission is often a crime.

What people do with that information, however, is out of the company’s hands.