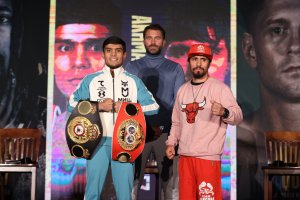 Murodjon Akhmadaliev and Jose Velásquez met face to face at the press conference prior to their bout on Friday for the World Boxing Association (WBA) Super Bantamweight Super Championship.

The Uzbek will step into the ring of the SNHU Arena, in New Hampshire, United States, to make the second defense of his WBA crown and also put at stake his IBF belt against the Chilean, who hopes to surprise in the event organized by Matchroom Boxing.

Akhmadaliev was supposed to make his mandatory defense against Ronny Rios, who tested positive for Covid-19 and could not fight. Velásquez appeared as a replacement, a fighter on a hot streak although less recognized than Rios.

“I have a tough opponent in front of me. The goal remains the same despite the change, I am ready to defend my belts, then I want to be undisputed champion,” assured the 27-year-old fighter.

For his part, “Pancora” assured that he is well prepared for the fight and that he wants to put the name of Chile in the elite of world boxing. The South American comes full of motivation and with a lot to win, which makes him a rival to watch out for.

After the press conference, both will have to step on the scales on Thursday and on Friday night they will fight for the black and gold crown. Akhmadaliev is undefeated in 9 fights, with 7 knockouts and Velasquez has 29 wins, 6 losses, 2 draws and 19 knockouts.