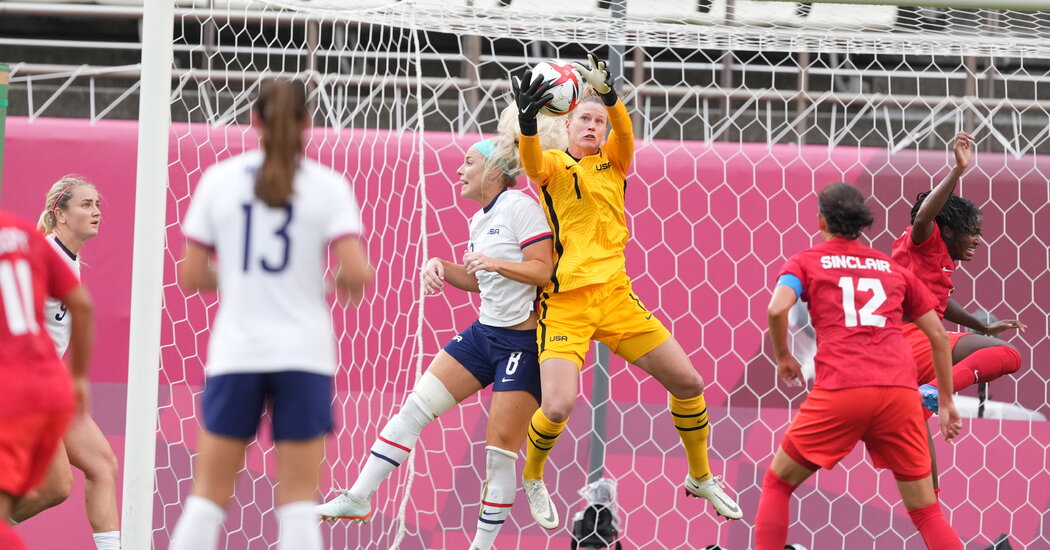 United States goalkeeper Alyssa Naeher, the hero of her team’s quarterfinal victory in the Olympic women’s soccer tournament, left the team’s semifinal match against Canada on Monday with a knee injury.

Naeher was injured in an awkward fall while leaping to intercept a Canada cross in the 20th minute. Colliding with teammate Julie Ertz as Canada’s Nichelle Prince raced by both of them on the challenge, Naeher landed with her right leg extended. Her right knee appeared to bend backward as her foot stuck in the turf.

Naeher immediately rolled over in obvious pain, and the game was stopped so she could receive treatment. Lying on her back and then sitting up, she was attended to by two U.S. trainers for about six minutes before deciding to stay in the game.

But about four minutes later, after the United States won a goal kick, Naeher took it and, swinging her right leg hard for the first time, aggravated the injury. She hopped on her landing, realized she could not continue and waved to the bench immediately, calling for a substitute.

Adrianna Franch, who had quickly warmed up while Naeher was being treated initially, sprinted on to take her place.

Naeher left the field by the closest route possible — the end line behind her goal — and then slowly limped her way around the corner flag and back to the United States bench.

By the time she was close enough for her teammates to come out to greet her, Naeher appeared to be wiping away tears with her yellow jersey.

Naeher had been the only U.S. player to play every minute of the Olympic tournament entering Monday, but it was her heroics on Friday, when she made several diving saves and blocked a late penalty kick against the Netherlands, that showed her real value.

She made two more saves in the penalty shootout after the U.S. and the Netherlands played to a 2-2 tie. Her final stop booked the Americans’ ticket to the semifinals.