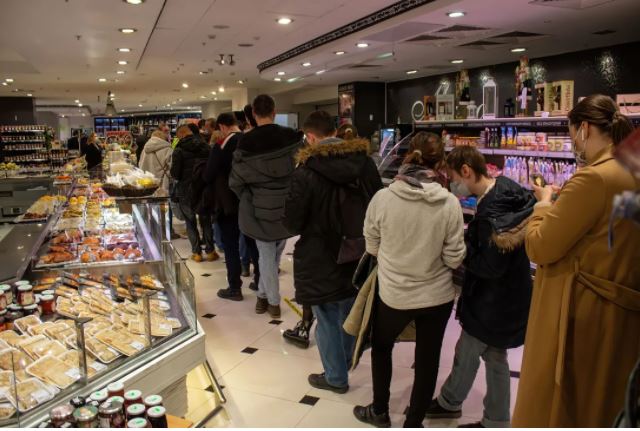 As Russia’s war on Ukraine intensifies, the US and its allies have continued to increase their economic pressure on the Russian government, to isolate the country further from the global financial system and debilitate its military capacity. Western allies have frozen Russian assets abroad, removed Russian banks from international banking networks and even banned all gas and oil imports, among other unprecedented penalties. But there’s still growing concern that Russian President Vladimir Putin and his supporters might turn to cryptocurrencies to avoid economic sanctions.

With their ability to operate as alternatives to the traditional financial system, cryptocurrency exchanges — digital marketplaces where you can buy and trade digital currencies — have become an effective option both for Ukraine supporters to raise funds for relief efforts and for ordinary Russians to seek financial shelter from the economic sanctions imposed on their country.

That’s why both the Ukrainian government and advocates for even further economic penalties against Russia have become increasingly vocal about the role crypto exchanges can play in the conflict. Hundreds of Western businesses, such as oil companies Shell and BP and tech players Netflix and Microsoft, have scaled back or halted their dealings in Russia since the beginning of the war. And some people argue that similarly stopping crypto operations in the country could significantly weaken Putin’s hold on Russia’s economy and its citizens.

“We are not preemptively banning all Russians from using Coinbase,” CEO Brian Armstrong tweeted March 3. That’s why they could be an ideal safe haven amid a wave of economic sanctions.

“Some ordinary Russians are using crypto as a lifeline now that their currency has collapsed,” Armstrong, the Coinbase CEO, tweeted. “Many of them likely oppose what their country is doing, and a ban would hurt them, too.”

As long as US crypto businesses are complying with US laws in ensuring that sanctioned individuals or entities aren’t using their platforms, “crypto could be a vital lifeline for ordinary Russians to preserve their savings [and] receive familial remittances,” Michael Parker said in an email. Parker is a former federal prosecutor who’s now head of anti-money laundering and sanctions practice at Ferrari & Associates, a Washington, DC-based law firm.

“I would guess that the vast majority of crypto holders on @krakenfx are anti-war,” Powell tweeted. “#Bitcoin is the embodiment of libertarian values, which strongly favor individualism and human rights.”

“And yet, there’s a striking naivete [in] that they are working in support of [Putin], the greatest autocrat alive today, the most restricted world leader, [who] they are tacitly supporting by enabling a bypass, if it’s even for the cognoscenti, for elites and for oligarchs, if it was as limited as some claim.”

What a full ban on Russia would and wouldn’t do

“Big banks in an economy need real liquidity,” Conklin said. “Conducting large-scale transactions in virtual currency is likely to be slow and expensive.”

Anthony Citrano, founder of Los Angeles-based NFT platform Acquicent, pointed to crypto prices as a clue to what’s going on. “If the Russian government really were using crypto as a major piece of their international finance strategy, you’d expect to see absolutely explosive growth in prices of major crypto [currencies],” he said, “which we have not seen. Time will tell, but for now there is zero evidence this is happening.”

“We’re talking about [the] potential loss of, or no access to, hundreds of billions of dollars in frozen [Russian] Central Bank assets. We’re talking about $1.5 trillion in potential trade losses,” he said. “The entire crypto market cap doesn’t approach what ultimately Russia would need to prop up a G20 [economy] government and fight what is going to become a more and more costly war.”

But that doesn’t mean the Russian government or Putin’s supporters won’t try to use crypto to circumvent economic sanctions. “Russian actors are very adept at money laundering and have been for a long time,” Redbord said. In the case of crypto, they’ll be looking for “noncompliant exchanges in order to move those funds.”

Such exchanges include platforms like Suex, which was blacklisted by the Biden administration in September for allegedly helping launder ransomware payments.  Redbord said.

Those digital platforms are already operating outside the law, though. For any US business, including businesses in the crypto industry, “there is still a full compliance obligation to not deal with sanctioned parties or interests in blocked property,” said Parker, from Ferrari & Associates.

Bringing Russia to a standstill

“They work best when voluntary efforts of the private sector rally.”

Economic sanctions imposed by the US government had an effect only when dozens of major private companies joined in. “It brought civil society to a stop/standstill,” he said.

Sonnenfeld and his research team at Yale compiled a list of companies that continued operating in Russia following its invasion of Ukraine. After the publication of a Washington Post story that mentioned that McDonald’s and Starbucks were on the list, both chains announced plans to stop operating in Russia. Since the list was created and made public, it now shows “over 330 companies [that] have announced their withdrawal from Russia in protest” of the Ukraine war.

For Sonnenfeld, paralyzing Russia’s economy is the only nonmilitary option the West has against Putin’s advances on Ukraine.

Allowing ordinary Russians to have access to digital assets through crypto exchanges is “not doing anything humanitarian,” Sonnenfeld said. “Is that cruel?” Sonnenfeld said. “No, it is better than shooting them, than bombing them — and that’s the stage we’re at right now.”