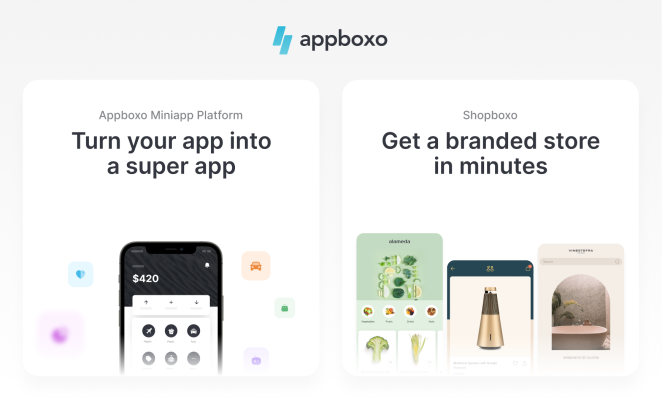 Mini-apps are lightweight programs that run within a larger app and serve as additional sources of user engagement and revenue. They became popularized by “super apps” like WeChat, Alibaba and Grab. But not all developers have these tech giants’ resources. Based in Singapore, Appboxo wants to level the playing field. The startup’s platform lets developers turn their apps into super apps, either by building their own mini-apps or accessing them through Appboxo Showroom, a marketplace for third-party developers.

Appboxo, whose clients include GCash, Paytm and VodaPay, announced today that it has raised $7 million in Series A funding led by RTP Global. Other participants included its first investors, Antler and 500 Southeast Asia, plus new backers like SciFi VC, Gradient Ventures (Google’s AI-focused venture fund) and angel investors Huey Lin and Kayvon Deldar.

Appboxo was founded in 2019 by Kaniyet Rayev, its CEO and CTO Nursultan Keneshbekov. TechCrunch first covered it in December 2020, when it announced its seed funding. The company is now used by 10 super apps across Southeast Asia, India and South Africa, and powers more than 400 mini-app integrations, the majority of which are built by third-party developers. The company says it has a combined base of more than 500 million users.

The company has two main products. The first is Miniapp, a SaaS platform with SDKs and APIs for building and launching mini-apps. For example, mobile wallets can integrate mini-apps for food delivery, shopping or restaurant reservations.

The second, launched about a year ago, is Shopboxo, which lets businesses set up customizable online stores through mobile devices in less than 30 seconds.

Then mini-apps created with Shopboxo can be integrated into super apps through Appboxo, and Rayev expects that being able to reach a broader merchant base of SMEs will “scale the number of mini-apps into the thousands this year, especially since Appboxo’s clients already use its platform mainly for e-commerce. “Financial super apps want to diversify into new verticals, and in the current landscape, e-commerce looks like the most obvious opportunity and the easiest to execute.”

Rayev tells TechCrunch that AppBoxo’s new funding will be used to further develop Shopboxo, while also expanding its merchant ecosystem and building out its international presence. At first, the startup will focus on the Asia-Pacific region, where super apps are the most dominant, he says, but it also wants to enter Europe and the United States.