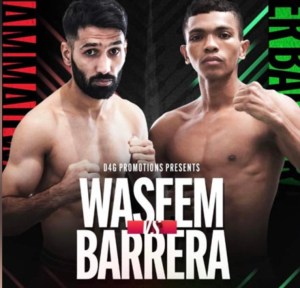 Barrera is ranked No. 4 in the WBA rankings and will fight Waseem, who is ranked fifth, in an important bout that brings them close to the right to fight for a world title.

The South American has already arrived in Arab lands with the intention of conditioning his body to the schedule and climate of Dubai. He has experience in world championship fights and intends to make it count despite the distance he has had to travel for the fight.

Meanwhile, Waseem is a former WBC regional champion and has fought for the IBF world belt. He has moved up the rankings thanks to his recent victories and hopes to fight for the title if he gets a win this Friday.