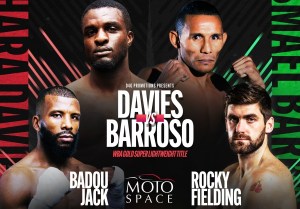 Barroso is a natural puncher and former WBA interim world champion. He is 38 years old but thanks to his power punche he has kept the belt in his possession.

He won it in December 2019 with a victory over Canadian Yves Ulysse Jr. but has been unable to defend it due to the pandemic pause. The South American returned to action in January this year and knocked out Nestor Paniagua, a fight that helped him come out of inactivity but in which his belt was not at stake.

This fight is a great opportunity for Davies. The Brit could become Gold champion if he beats Barroso. He also has remarkable power and has been in quality fights.

Davies has already fought WBA super champion, the Scotish Josh Taylor, who is currently one of the best pound-for-pound fighters in the division, but lost by technical knockout in seven rounds. In addition, his 29 years represent an advantage over Barroso.

In the event announced by MTK Global, there will also be good names such as Badou Jack, Rocky Fielding, among others. The WBA supports that different scenarios in the world continue to gain notoriety and that boxing continues its expansion.