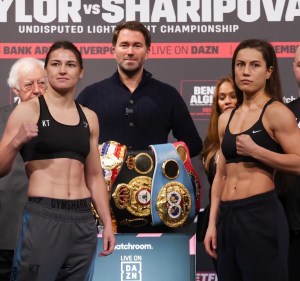 The Echo Arena in Liverpool, England, will be blazing on Saturday night with a total of five World Boxing Association (WBA) titles on the line. Highlights include Katie Taylor vs. Firuza Sharipova for the undisputed lightweight championship and Conor Benn vs. Chris Algieri.

Benn and Algieri will be in the main event, in which the former will defend his WBA Continental welterweight belt for the sixth time, while Taylor and Sharipova will fight in the co-main event for the WBA, WBC, IBF and WBO 135 lbs. belts. All made weight on Friday and are ready for their bouts.

In addition to the main fights, Jorge Cordina will face Miko Khatchatryan for the continental super featherweight title in a great undefeated duel, while British Caoimhin Agyarko will clash with Noe Larios Jr. for the vacant WBA-International bantamweight belt.

On the other hand, Robbie Davies Jr. and Hank Lundy will figh for the vacant WBA Continental super lightweight belt. However, only Davies will be eligible for it as Lundy did not make the weight.