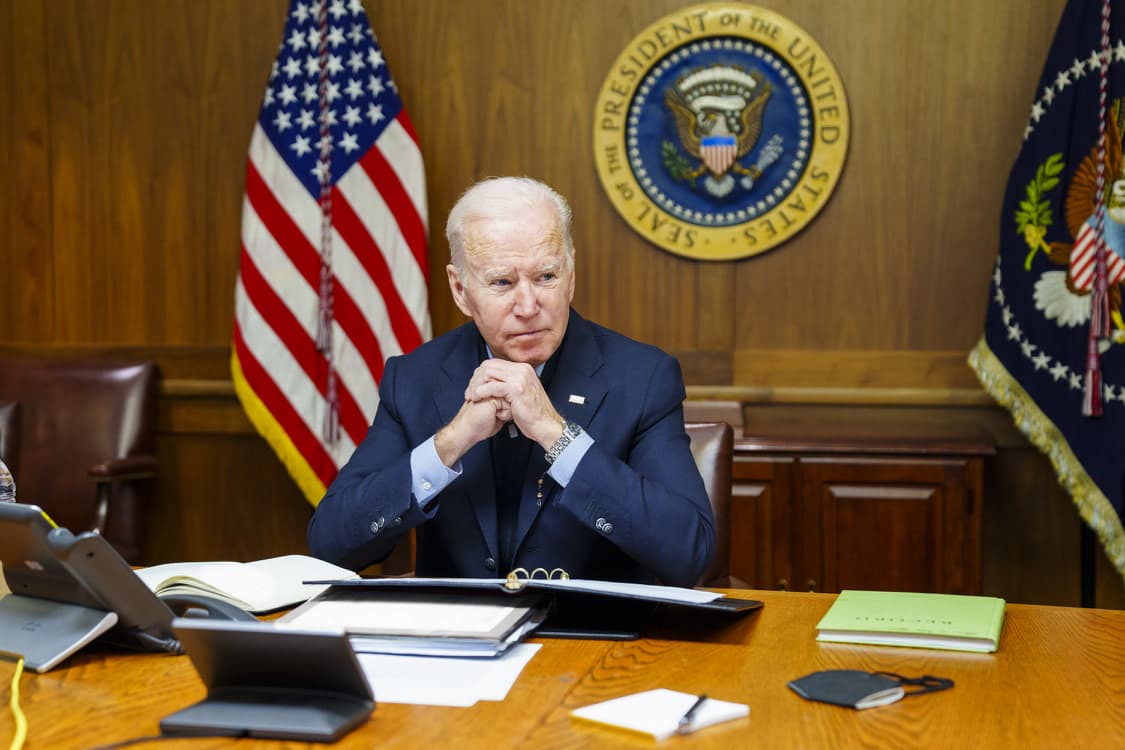 President Biden has warned Putin that the U.S. and its allies are willing to impose swift and severe costs on Russia.

WASHINGTON –President Joe Biden will convene a meeting of the National Security Council Sunday amid the rapidly deteriorating security conditions in Ukraine.

In a statement Saturday evening, White House press secretary Jen Psaki said the president was receiving regular updates about events on the ground, adding that his national security team “reaffirmed that Russia could launch an attack against Ukraine at any time.”

In a Friday address, Biden said the U.S. believes that Russian President Vladimir Putin has decided to carry out an attack on Ukraine “in the coming days.”

“We have reason to believe the Russian forces are planning and intend to attack Ukraine in the coming week, in the coming days,” Biden said in his second address in the past week. “We believe that they will target Ukraine’s capital, Kyiv, a city of 2.8 million innocent people.”

The Biden administration has previously declined to predict Putin’s playbook even as Russia has deployed nearly half of its military to Ukraine’s northern and eastern flank.

The Kremlin has denied that the more than 150,000 Russian troops outfitted with advanced military equipment along Ukraine’s borders are preparing for an invasion.

When asked, Biden said that there was still time for Putin to choose a path of diplomacy.

The nation’s top diplomat reiterated on Sunday that the U.S. and its allies are hopeful for a resolution to this crisis that does not evolve into a war.

“Until the tanks are rolling and the planes are in the air we are going to try everything we possibly can to get President Putin to reverse the decision we believe he’s made,” Secretary of State Antony Blinken said during an interview on NBC News Sunday program “Meet the Press.”

“Until the last minute, there is still an option for him to pull back,” Blinken said, adding that he is slated to meet with his Russian counterpart Foreign Minister Sergey Lavrov in the coming week.

Last week, Blinken made a dramatic appearance at the United Nations to share a grim assessment of what Russian forces could do to Ukraine if the Kremlin suddenly launched an attack.

“Russian missiles and bombs will drop across Ukraine. Communications will be jammed, cyberattacks will shut down key Ukrainian institutions. After that, Russian tanks and soldiers will advance on key targets that have already been identified and mapped out in detailed plans,” he told the U.N. Security Council.

Last month, Chairman of the Joint Chiefs of Staff U.S. Army Gen. Mark Milley told reporters at the Pentagon that Russia’s posture along Ukraine’s border was unlike anything he has seen during his four-decade military career.

“Given the type of forces that are arrayed, the ground maneuver forces, the artillery, the ballistic missiles, the air forces, all of it packaged together. If that was unleashed on Ukraine, it would be significant, very significant, and it would result in a significant amount of casualties,” Milley said on Jan. 28.

“It would be horrific,” he added.