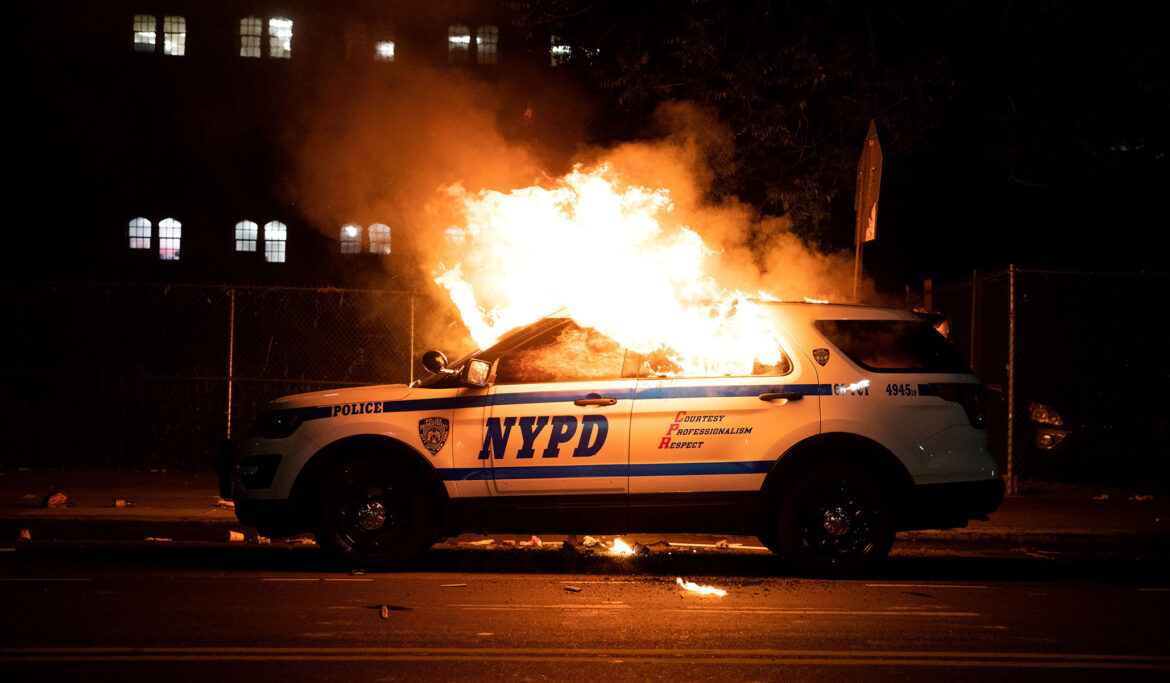 A NYPD police car is set on fire as protesters clash with police during a march against the death of George Floyd, in New York City, May 30, 2020. (Jeenah Moon/Reuters)

Leaders of the Black Lives Matter New York chapter threatened to unleash violent protests in the city if mayor-elect Eric Adams reinstates the plain clothes anti-crime units that were disbanded amid the civil unrest prompted by the murder of George Floyd.

“If he thinks that they’re going to go back to the old ways of policing, then we are going to take to the streets again,” Hawk Newsome, co-founder of Black Lives Matter of Greater New York, told the New York Daily News. “There will be riots, there will be fire and there will be bloodshed because we believe in defending our people.”

Newsome’s sister and the other co-founder of the branch, Chivona Newsome, warned of the repercussions and lawlessness the group will inflict if Adams resurrects the unit.

“We will shut the city down. We will shut down City Hall, and we will give him hell and make it a nightmare,” she told the publication.

At a time when shootings and stabbings are on the rise in the city, Adams, a former police captain, has vowed to reestablish a reformed version of the plain-clothes anti-crime unit.

“We should not throw out the baby with the bathwater. Having a good Anti-Crime team will continue to take guns off the streets,” Adams told the Gothamist in an interview. “We can do it right, we’ll get it right, and we’ll make sure our city is safe.”

Before it created an explicit anti-crime unit, the NYPD used plainclothes police squads to curb criminal activity, with one group becoming known for seizing large numbers of illegal firearms.

A number of high-profile police killings throughout the 2000s sparked a backlash against the anti-crime unit, however, mostly alleging that officers engaged in misconduct and abuse of authority through a tactic called “stop and frisk,” which critics say involved racial profiling and disproportionately targeted minorities. The unit was eventually disbanded in June 2020 amid the wave of racial justice protests following the death of George Floyd. A spike in gun and other violent crimes followed.

Adams says he would reinvent the anti-crime unit to prioritize trust and relationship building with the broader community rather than aggressively seeking out crime.

“The Anti-Crime model we witnessed previously was a model where you just searched as many people as possible. You arrest a lot of innocent New Yorkers just to try to find that gun in the haystack,” he told the Gothamist.