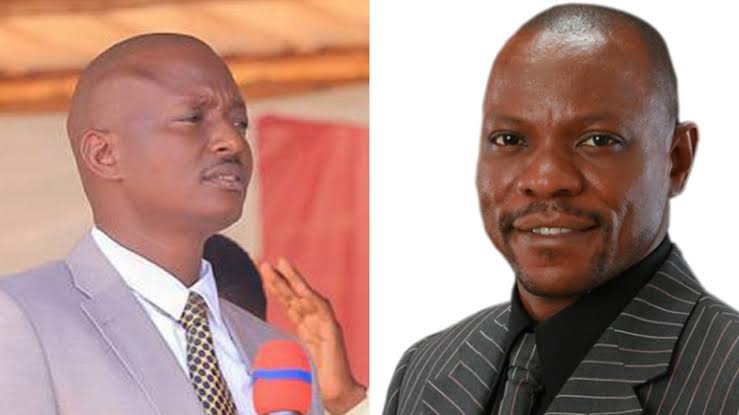 Christian Life Church Ministries’ Pastor Jackson Ssenyonga has once again attacked his fellow preacher Pastor Aloysius Bugingo whom he accuses of promoting prostitution and moral decay among the young generation.

During a preaching session at his Makerere based Church on Wednesday, Ssenyonga said Bugingo and his new wife Susan Makula Nantaba are teaching the young children who see them as an inspiration, prostitution since they went against the Bible preachings that condemn infidelity.

Bugingo who is yet to divorce his estranged wife Teddy Naluswa, was on Tuesday introduced by his fiance Susan in a glamourous kwanjula ceremony.

“You heard that he was introduced by a prostitute without any fear. They have soiled the Bible, they have put down our beliefs. They are teaching our young generation to go into prostitution,” Ssenyonga told his followers.

“They are bringing marital weaknesses and immortality among pastors and believers. If a pastor does such an act, would he tell you that you shouldn’t separate with your wife? I chased my wife but you don’t chase yours. How will you teach others proper virtuals of marriage yet for you, you act differently.”

Ssenyonga also cautioned his congregation that self proclaimed pastors like Bugingo are opportunists who use the Bible to make money. He said they collect money from their churches which in turn they use to promote prostitution and witchcraft.

” You disrespected the Bible, you spit before in the face of God and then you claim to be a pastor.Children of God, I have been warning you that these are not pastors. They are opportunists who use the Bible to make money but the scripts will never change them. They are not there to obey the scriptures. They want the Bible for business purposes.The money that was used to introduce the prostitute was collected from the Church offerings direct. These people use money collected from church to promote witchcraft and prostitution. Those who still go to his church were blindfolded through whichcraft,”he claimed.

” Those of you who are here, you should be thankful that your not blindfolded. We should pray for our brothers and sisters who are still blindfolded by the fake pastors to at least see the light. Those of you who have the capability please go and pick your colleagues from those churches and bring them to good places of worship.”

This is not the first time Ssenyonga is attacking Bugingo. Over the years, the Top Media boss has been accusing the latter of being a fake pastor who uses the pulpit to enrich himself.

In 209, Bugingo the lead preacher at House of Prayer Ministries International (HPMI) accused Ssenyonga, of having plans to kill him.

He said Ssenyonga was trying all means to frustrate his ministry and wanted to see him dead.

“Ssenyonga wants to see me dead,” Bugingo said, while explaining to his followers, why different pastors are against his ministry.

An angry Bugingo said Ssenyonga doesn’t know the pain of starting a church, let alone having inherited his Christian Life ministries which belonged to the late Pastor Balabyekkubo.