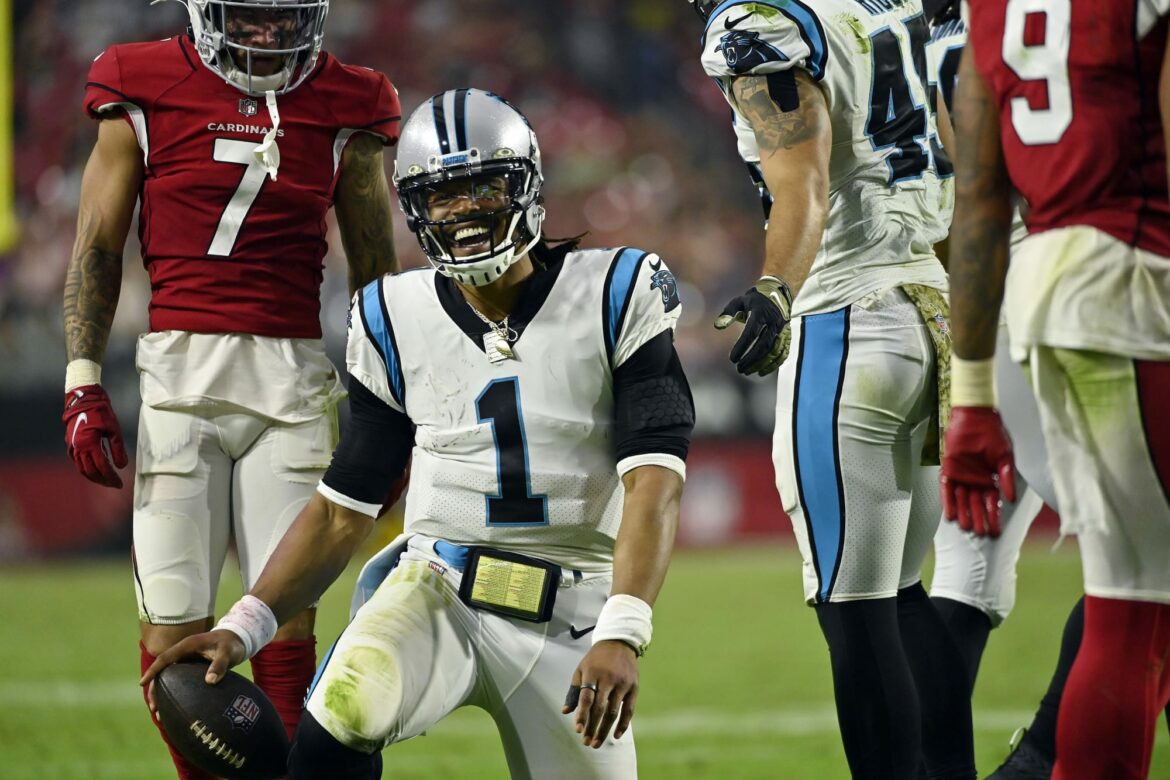 Cam Newton and the Panthers won in his official return to the team on Sunday in Arizona. He loved every single minute of it.

In case you haven’t heard, Superman has returned to the Carolina Panthers.

The Carolina Panthers made a splash to sign their all-time passing leader Cam Newton on Thursday. For the first time since 2019, the 2015 NFL MVP appeared on the sidelines for the Panthers on Sunday. Once Newton’s number was called, on a first-and-goal situation, the QB Carolina calls “Superman” scored a touchdown on a designed quarterback run.

Afterwards, Newton twice screamed “I’m back.” His emotions ran so high he was called for an unsportsmanlike conduct penalty that was enforced on the kickoff.

The former 2011 NFL Rookie of the Year recipient didn’t shy away from answering why he was so passionate after putting the Panthers on the board. In a joint press conference with wideout Robby Anderson, who Newton connected with on a two-yard touchdown pass, the former Heisman trophy winner quipped: “I’ll put it like this. This time last week I was eating a bowl of cereal, like, you feel me?”

For Newton this was more than just a game. Newton’s Panthers return was in the very same stadium he began his NFL career as a Day One starter during his rookie campaign in 2011. That game he made history as the first NFL quarterback to throw for over 400 yards in a first career start. Before the NFL, this was also the very same stadium he played the BCS National Championship game where he led the Auburn Tigers to win their first national title in 53 years. So at State Farm Stadium, Newton ended his college career, began his NFL career and now it seems he has completed his NFL resurgence in there as well.

Throughout the presser the three-time Pro Bowler expressed his gratitude for being back in Carolina.

“It’s crazy. God working in my life right now,” Newton said, before telling reporters, “I know a lot of people in the media … they want to make it about me. It’s not about me … this was an impeccable team win.”

While Newton and head coach Matt Rhule have reinforced this reunion is about winning, the Panthers see themselves in the driver’s seat for the seventh seed in the NFC Playoff Picture.

Christian McCaffrey, Anderson and Stephon Gilmore have been on record voicing their enthusiasm for having Newton in the building. While credit will be given to Newton for injecting energy into a team that lost five of their last six games to help the Panthers knock off the Arizona Cardinals 34-10, who came into the game with the NFC’s top record, Newton can careless.

“Who cares who gets the glory. When we have a game like this, we all win,” Newton said.

Next week Newton will face the coach that drafted him in Ron Rivera when the Panthers take on the Washington Football Team.