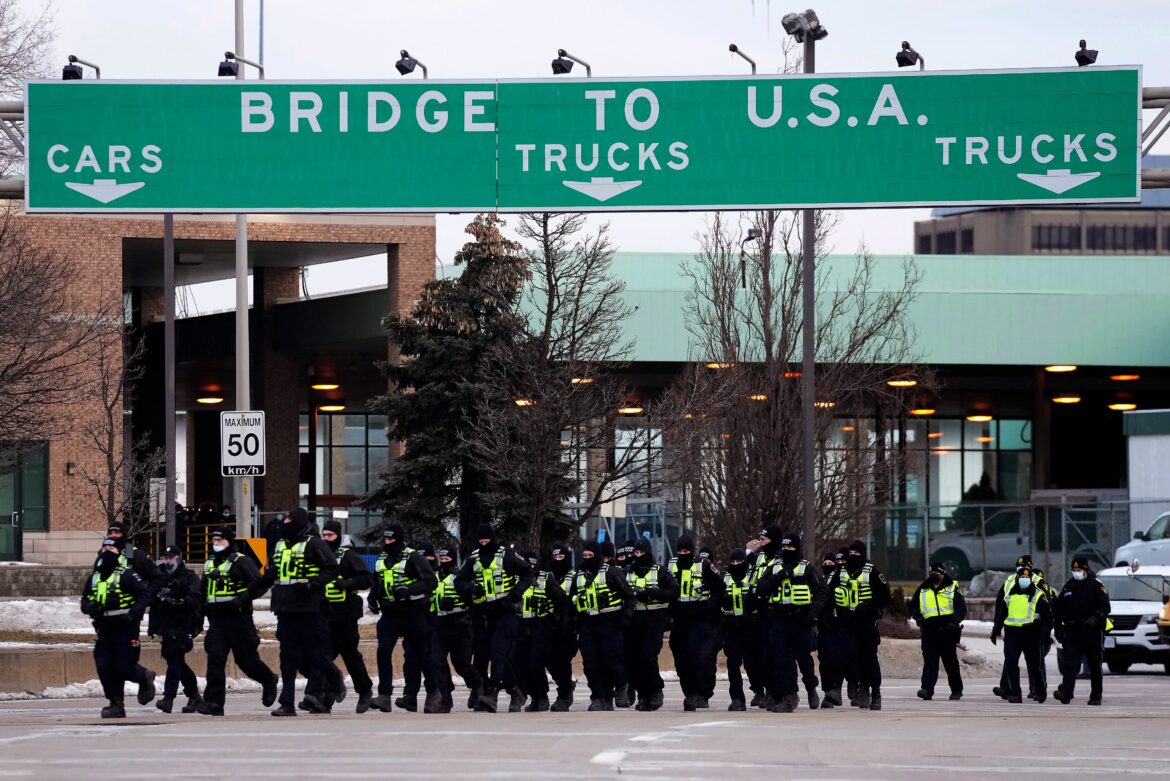 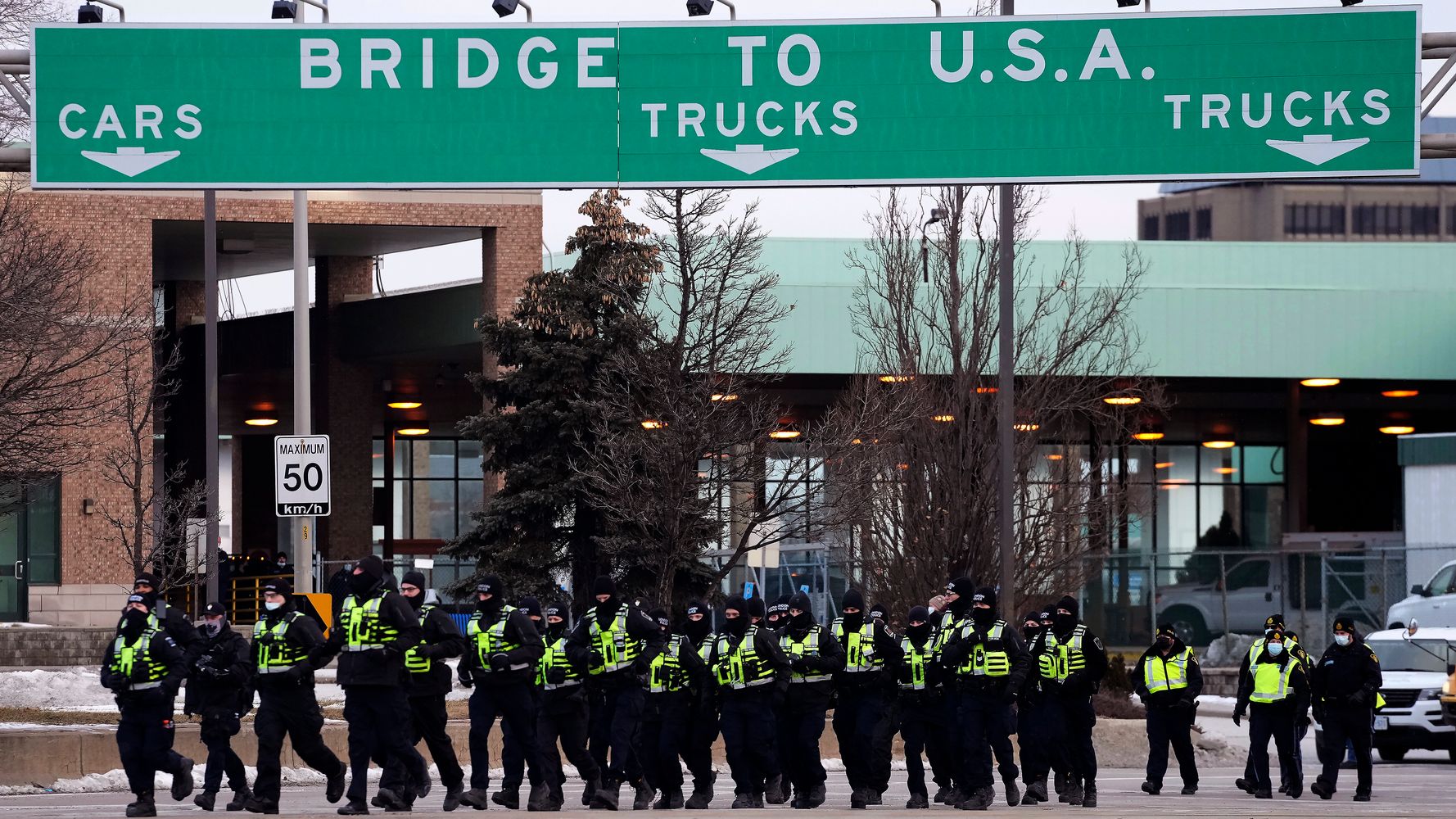 Protesters at the busiest border crossing between the United States and Canada remained despite new warnings to end the blockade that has disrupted the flow of goods between the two countries and forced the auto industry on both sides to roll back production.

A city bus and school bus arrived on the scene Saturday morning and police moved in formation toward them. One of the protesters used a megaphone to alert others that police were coming for the demonstrators, who are protesting against Canada’s COVID-19 mandates and restrictions. There is also an outpouring of fury toward Prime Minister Justin Trudeau.

“The Windsor Police & its policing partners have commenced enforcement at and near the Ambassador Bridge. We urge all demonstrators to act lawfully & peacefully. Commuters are still being asked to avoid the areas affected by the demonstrations at this time,” police tweeted.

Police move into position to enforce an injunction against a demonstration which has blocked traffic across the Ambassador Bridge by protesters against COVID-19 restrictions, in Windsor, Ontario.

About 20 protesters milled about outside early Saturday, while others remained in their pickup trucks and other cars. A judge on Friday ordered protesters at the Ambassador Bridge over the U.S.-Canadian border to end the blockade that has now entered a sixth day.

On Friday, Ontario Premier Doug Ford declared a state of emergency in the province that will allow his cabinet to impose $100,000 fines and up to one year in jail as punishments against people who continue to illegally block roads, bridges, walkways and other critical infrastructure.

Chief Justice Geoffrey Morawetz of the Ontario Superior Court issued an injunction giving protesters blocking cross-border traffic until 7 p.m. Friday to clear out. However, the deadline came and went. 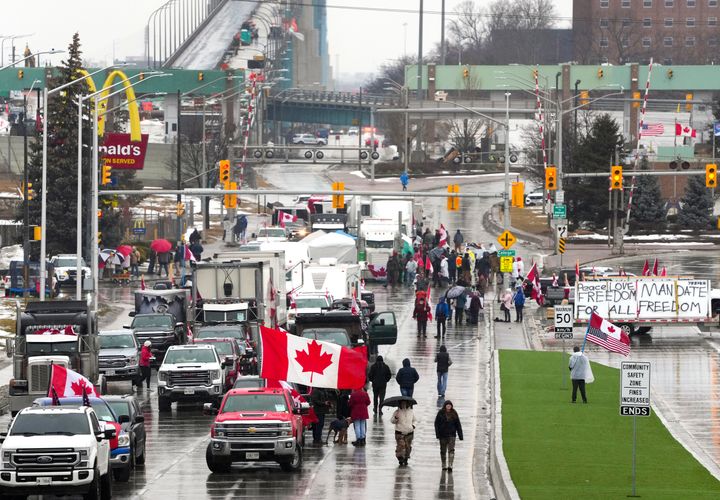 Truckers and supporters block the access leading from the Ambassador Bridge, linking Detroit and Windsor, as truckers and their supporters continue to protest against COVID-19 vaccine mandates and restrictions, in Windsor, Ontario on Friday.

Windsor police immediately warned that anyone blocking the streets could be subject to arrest and their vehicles could be seized.

The news was met earlier with defiance by protesters.

At the Ambassador Bridge, an unidentified person grabbed a microphone and addressed the crowd, asking if they wanted to stay or leave when the deadline rolled around. By a show of applause, it was agreed they would stay. “OK,” the man said. “Let’s stand tall.” The protesters responded by singing the Canadian national anthem.

The Ambassador Bridge is the busiest U.S.-Canadian border crossing, carrying 25% of all trade between the two countries. The standoff comes at a time when the auto industry is already struggling to maintain production in the face of pandemic-induced shortages of computer chips and other supply-chain disruptions. 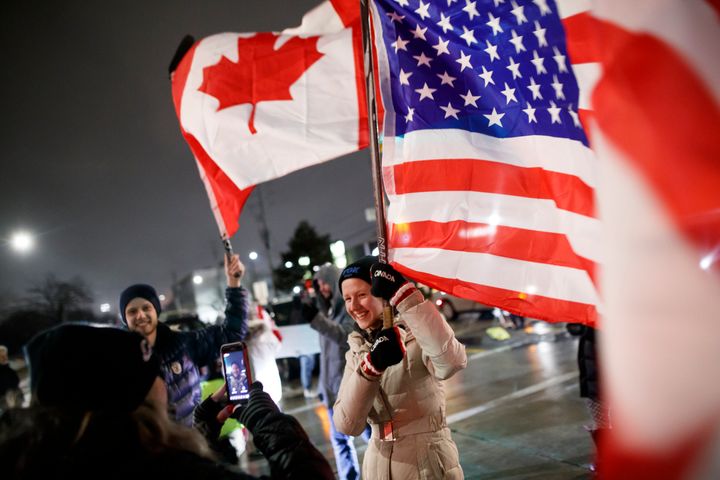 Protesters and supporters wave flags at a blockade at the foot of the Ambassador Bridge, sealing off the flow of commercial traffic over the bridge into Canada from Detroit.

While the Canadian protesters are decrying vaccine mandates for truckers and other COVID-19 restrictions, many of the country’s infection measures, such as mask rules and vaccine passports for getting into restaurants and theaters are already falling away as the omicron surge levels off.

Pandemic restrictions have been far stricter in Canada than in the U.S., but Canadians have largely supported them. The vast majority of Canadians are vaccinated, and the COVID-19 death rate is one-third that of the United States.