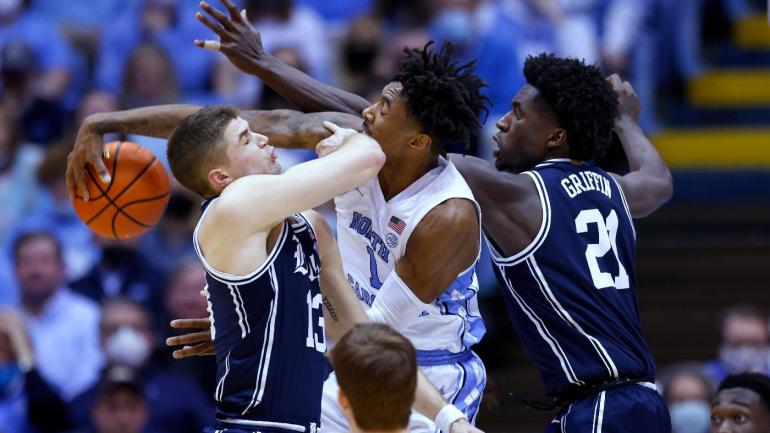 Mike Krzyzewski was hired at Duke ahead of the 1980–81 season. Coincidentally, a top high school player named Michael Jordan was being recruited that same year.

And, as the story goes, North Carolina native Jordan chose Duke’s rival UNC and began his college career in 1981 there.

Various letters from Coach K have gone viral ahead of his final home game in Cameron Indoor on Saturday, and now a letter the longtime Blue Devils coach sent Jordan in 1980 is going viral.

This isn’t the first time this letter has shown up on the internet. However, what makes it significant this time is the context of knowing how Coach K sent letters throughout his whole 42-year career at Duke. And, this letter to MJ happened to be in his first season in Durham. You are a fine young man and you should make an immediate impact on whatever you choose.”

Needless to say, Jordan made a giant impact on the game of basketball, and in his freshman season at UNC, he helped his team to a national title.

They had a complex relationship for a long time before they became close friends. This piece sort of traces that development.

There are a couple of points that we wanted to focus on here.

It sounds a lot like Smith blowing smoke, doesn’t it?

And years later, of course, Smith pushed hard to have Krzyzewski named the head coach for the US National Team.

Then there’s the story of Smith’s decline and the last meeting between the two. You’ll have to read it. It’s sweet and heartbreaking at the same time.

Anyway, it’s a really good read if you haven’t seen it yet. It’s a keeper.

It’s time. We’ve reached the end of the road.

He went as far as to ban the words “final” and “last” from Duke’s vocabulary.

Time after time, he deflected questions about his feelings as the end neared. That happened even this week, when Coach K evoked images of his shot blocking center Mark Williams, swatting away questions about the UNC game.

“I don’t look at a week. I look at my next opponent. I’ve done that since I learned how to coach a few decades ago.”

“We’ve always evoked a lot of attention, maybe a little bit more now, but it’s something I’ve had the honor of dealing with for a good part of my career,” he said later. “Pitt’s the only thing on my mind right now.”

Krzyzewski finished off his shutdown of UCN talk with, “It doesn’t make any difference what happens afterwards. We want to beat Pitt and lock up the No. 1 seed (in the ACC). To me, that’s the biggest thing happening this week.”

But now, with Pitt in the books, there are no detours left. Last and final can reenter the lexicon. Krzyzewski’s time at Duke is down to one more regular season game—Saturday evening, at Cameron Indoor, against North Carolina.

It promises to be the hottest ticket in sports, with the cheapest available seats on the secondary market starting at $3,000. The average price is higher than most Super Bowls, NBA Finals and World Series tickets. A charity auction bidder before the season paid a million dollars for four seats.

In addition to being Coach K’s final game, it’s against the Tar Heels, which is always a hot ticket. Duke may have already wrapped up the regular season title by game time, while UNC is currently at No. 3 in the league.

Duke won by 20 in Chapel Hill last month. Before the game, in the tunnel leading to the court, Krzyzewski posed for a photo with Roy Williams, who retired after 18 years as UNC coach prior to this season. Also joining them were Hubert Davis, a former Tar Heel player and Williams assistant who replaced him on the bench, and Jon Scheyer, a former Blue Devil player and Krzyzewski assistant who will replace him when this season ends.