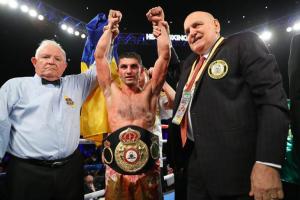 After winning the bidding, the promoter had given three possible dates and it only remained to say in which of those they were going to fight. This weekend they announced that Saturday, November 20 is the date chosen for the mandatory fight between the Ukrainian and the Panamanian.

Dalakian, born in Azerbaijan but of Ukrainian nationality, is undefeated and has been 112-pound champion since 2018 when he defeated Brian Viloria by unanimous decision. He has since made four defenses of the black and gold belt.

The mandatory opponent is Concepcion, who earned that status because he was the interim champion before the WBA’s title reduction plan began. The Central American will now have the opportunity to fight for the crown although he will have a tough challenge away from home.

Dalakian is undefeated in 20 fights, with 14 knockouts, while Concepcion has a record of 39 wins, 8 losses and 28 knockouts.