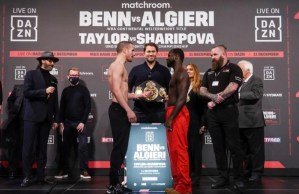 Robbie Davies Jr. defeated Hank Lundy to become the new World Boxing Association (WBA) Continental Super Lightweight champion after landing a knockout in just the second round on Saturday at the Echo Arena in Liverpool.

In one of the fights of the event organized by Matchroom Boxing and in which Conor Benn vs. Chris Algieri was the main fight, Davies prevailed in a duel of veterans to win the regional belt of the oldest sanctioning body in the world.

Davies, who is a native of Liverpool and felt the affection of the public, showed his superiority from the beginning and in the very first round he hurt Lundy to give a warning of what the fight was going to be.

Although his rival was saved by the bell, it seemed a matter of time for Davies to beat him, and in the second round he landed a combination that knocked Lundy out of the ring to end the fight.