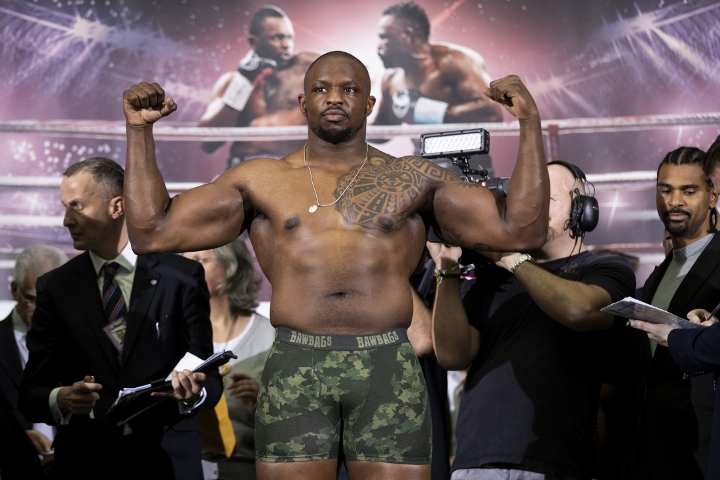 There are several in the boxing world who find the newly signed showdown between Dillian Whyte and Tyson Fury an intriguing one. Following weeks of negotiations, the pair will finally square off on April 23rd, in Wembley Stadium in the United Kingdom.

Although Whyte has aggregated wins against some of the heavyweight division’s best, including former champions, Joseph Parker, Lucas Browne, and former interim titlist Alexander Povetkin, Fury is viewed as a gargantuan favorite.

While most are expecting Fury to crush Whyte’s world title dreams, Dereck Chisora is going against the grain and choosing Whyte to pull off the unlikely upset.

“Dillian Whyte,” said Chisora to Behind The Gloves when asked who he expects to win. “He’s going to have to work hard to win. He wants it, he’s hungry.”

Fury, now 33, completed a brutal three-fight series with hard-hitting former titlist, Deontay Wilder. Fury peeled himself up off the deck during their October showdown in 2021, to ultimately stop Wilder in the 11th round.

The win for Fury may have been arguably the most impressive of his career, but Chisora believes it came at a devastating cost. Immediately following the first defense of his WBC crown, Fury was presented with life-changing money. With the British native reportedly making upwards of $30 million for their heavyweight clash and roughly $32 million to face Whyte, Chisora believes that the added income will be his undoing.

Having been involved in the pugilistic sport for a decade and a half, Chisora can only recall one fighter who pocketed a boatload of money and remained the same.

“When fighters make $20 to $40 million, they’re not hungry anymore,” continued Chisora. “There’s only one fighter that’s ever been hungry when he made $100 million and that was Floyd Mayweather. When fighters make all of this money, they’re not hungry anymore. They just do it for the sake of doing it. But when someone is hungry, like Dillian right now, he’s going to die in that ring.”

Chisora knows good and well how far Whyte is willing to push himself in order to secure a victory. In 2016 and 2018, Chisora engaged in a back and forth war with Whyte, falling short on both occasions. Chisora’s ring experience with Whyte has left him with a newfound respect for his rival, something he believes Fury lacks for his latest title challenger.

In totality, Chisora believes that Fury is normally locked in on the person standing in front of him. However, when asked if Fury is looking past Whyte, Chisora gave a succinct answer.