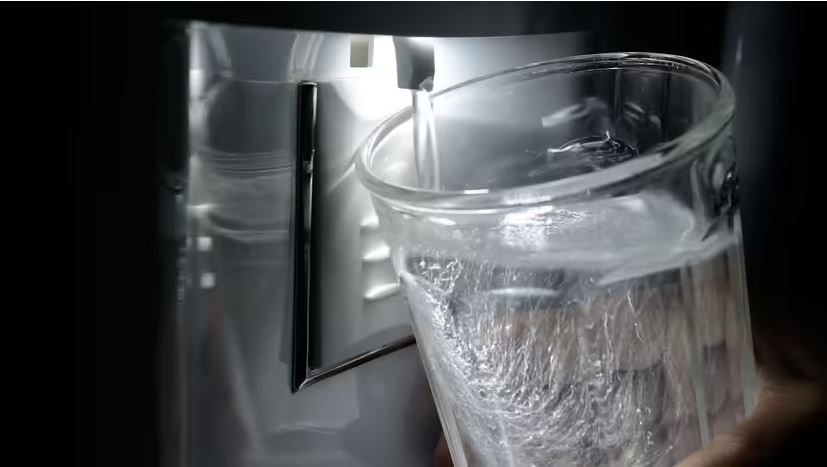 Built-in refrigerator water dispensers are one of those first-world luxuries that are easy to take for granted. The water is crisp, cool and thanks to integrated filters, generally clean. But despite that filtration, sometimes the water that pours out tastes pretty awful.

The problem often occurs even in brand-new fridges. Other times, it starts later, getting worse and worse until the water tastes downright disgusting. This can happen in any brand of fridge, including Whirlpool, Frigidaire, KitchenAid, LG, Samsung and essentially any model that has a dispenser.

In some cases, this is an easy fix. But not always. When it comes to today’s high-tech fridges, even pros may need direction when trying to resolve water issues.

“In regard to the water being provided through the refrigerator, over the years, manufacturers have refined their designs to eliminate there being voids in the system where water might age or remain still,” emails Bob Tuck, a Mr. Appliance franchise owner in Florida.

Let’s go over some tips from the experts on ways to improve that funky fridge water taste.

The filter’s not always the problem. But it often is.

“Sometimes [the bad taste] may be due to issues with the water supply, plumbing, or mold or bacteria,” says Jake Romano of John The Plumber in Ottawa, Canada. “But generally speaking — it’s the filter.”

Fridge water dispenser filters don’t last forever. On average, you should replace them about every six months. So, if you changed your filter once – five years ago – this could be a eureka moment for you.

“The water could taste bad because there are bacteria growing in the old filter, or the filter has stopped properly working and the water now just tastes like tap water (which could be dangerous, depending on what contaminants are in the water source),” says Brian Campbell of WaterFilterGuru.com.

Properly working filters remove all sorts of gunk from drinking water, including:

But — and this is a big but — it’s worth pointing out that these filters are anything but advanced. They don’t address issues like heavy metals and other kinds of harmful problems.

As the filter ages, it can become overloaded with grody gunk, and as a result, unfiltered water will sashay right on by filter components and slosh right into your glass. That’s a reason you may very well notice an “off” smell or taste.

There are other clues that the filter might be past its useful life. You may notice that the ice maker is slow to create ice, or perhaps isn’t making ice at all. You might also realize that the water dispenser pressure is noticeably lower than it used to be.

If you’re unsettled by the idea of changing your water filter twice a year (at up to $50 a pop), you should know that not everyone’s convinced that this replacement rate is necessary. The interior of the filter is essentially an activated carbon construction that’s found in many types of drinking water filters, and they may not wear out all that quickly with light to moderate use. But certainly, if you’re trying to solve a water-taste issue, that would be the place to start. And you don’t have to buy the fridge manufacturer’s filter either. An off-brand one will work just as well.

If your water source is particularly poor, one round of filtration may not be enough to remove residual odors and flavors that contribute to a funky taste.

“A smell like rotten eggs, sulfur or metal cannot be a symptom of a failing water dispenser, but it can point to bad plumbing, clog in the system or interruptions in the water supply,” emails Stephany Smith, a member of the fridge repair department at Fantastic Services in London. “To figure out whether the problem roots in your plumbing system, water supply or the fixture itself, check if the tap water tastes funny.”

In other words, if water from all your faucets — not just the fridge — tastes weird, well, you probably already know that the fridge itself is not the problem. It’s your water.

Smith says that if utility workers have repaired cracked pipes or otherwise worked on nearby pipes, particulates may infiltrate what’s normally a sealed system.

3. Check Whether the Dispenser Is New or Unused

If your fridge sits for extended periods without dispensing water, the water that’s already in the lines might start to taste bad. Again, running fresh water for a minute or two may drastically improve the taste.

“Release any trapped air by pressing-releasing the dispenser lever, button or push switch in five-second intervals. To ensure you are drinking clean water, keep on doing the same procedure until you dispense 10-15 glasses of water,” advises Smith.

If it’s a new fridge, she notes that the water lines may have accumulated dust and debris during the manufacturing process, posing a health risk to anyone who consumes this water.

She recommends flushing the water dispenser from the inside with distilled vinegar to clean it (discard the ice in the storage container before you do this.)

“Before you start anything, disconnect the water supply, as well as the tube where you want to pour 2-3 cups of distilled vinegar. Once done, let the vinegar sit a few seconds and wash out the system by dispensing approximately 2 liters [8.5 cups] of water,” she says.