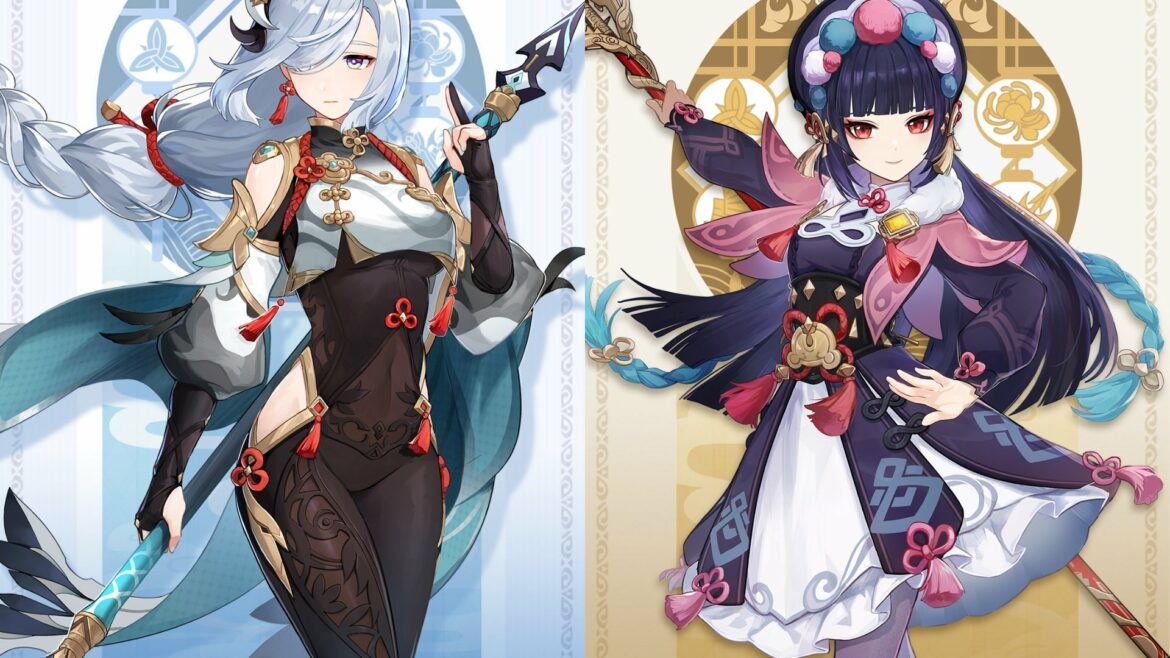 Genshin Impact developer miHoYo should reveal in a few days the voice actors (seiyuu) of Shenhe and Yun Jin coming in Version 2.4, so let’s share our guesses and predict who is most likely to voice them.

The Genshin Impact Version 2.4 livestream in a few days will reveal the seiyuu for new characters Shenhe and Yun Jin. First, it’s important to note that Genshin Impact is a game made by otaku for otaku. miHoYo spends much more time and budget on the Japanese dub than on any other language’s dub.

Secondly, all Genshin Impact characters are based on popular archetypes or are similar to classic anime characters. And miHoYo typecasts these characters, as hinted at in our interview, and later confirmed in the first Tomoaki Maeno video interview for Zhongli. It’s definitely the case with 5-star characters but less so with 4-star characters. Except for those important in the story, who are all voiced by veterans fitting their archetypes.

In other words, it’s easy to make seiyuu (Japanese voice actresses and actors) predictions for Genshin Impact, as all the popular ones will inevitably end up in the game at some point.

MORE – What kind of game is Twisted Wonderland?

From what we know so far, Shenhe is the disciple of Cloud Retainer who acts the most like an Adeptus and like Cloud Retainer herself. Despite being human. Shenhe’s a Cryo user too, so you can expect her to have a cold or cool personality overall.

Furthermore, certain seiyuu like Miyuki Sawashiro would definitely fit Shenhe. But Sawashiro already voices Ei, and I can assure you miHoYo will never reuse a seiyuu in the Japanese dub. It’ll be a wasted opportunity to get some gacha revenue. So this narrows down the choices even more.

Meanwhile, it’s harder to predict who could voice Yun Jin. Seeing she’s an opera singer and a gothic lolita I’m expecting miHoYo to give her a pretty big seiyuu with a singing career. But as a 4-star character, I wouldn’t be surprised if they went for a more recent but less popular voice actress for Yun Jin.

Yumi Toma is a huge veteran seiyuu in the industry, active since the late 80s. She voiced several main characters in classics like Deedlit in Lodoss. A reference role for Shenhe could be Lenneth in Valkyrie Profile. Shenhe is described as being “distant to earthly life” which could be similar to Lenneth, who is kind to humans but still sticks to her job as a Valkyrie, harvesting souls. And of course, Lenneth is technically a lance character when using her iconic finisher Nibelung Valesti.

Mariko Suzuki is another veteran seiyuu who could definitely fit Shenhe assuming miHoYo is going for the cold and emotionless type. Though I wouldn’t be surprised if miHoYo is saving Mariko Suzuki for a playable android character from Snezhnaya, with a concept similar to Katheryne.

Haruka Tomatsu regularly voices strong-willed female fighters, with her most popular role being Asuna in Sword Art Online. However, one role that makes me think of her for Shenhe is Bell Renjouji from Pretty Series. Similar to how Bell dedicates everything to her training, Shenhe spent years dedicated to learning the Adeptus arts and exorcism.

Haruka Tomatsu has an incredible range and could easily fit a high society lady like Yun Jin too. She already voiced similar characters such as Haru in Persona 5. However, she might be a too big of a name for a 4-star character. Especially seeing Yun Jin might not play a big role in the main story.

If Shenhe turns out to be even colder than expected, and downright scary like a yandere, Mamiko Noto would be the perfect fit. Younger anime fans know Mamiko Noto for voicing Scáthach in FGO, so miHoYo could go for that as she’s also a very popular polearm character.

Mamiko Noto would be a pretty easy choice for Yun Jin too, as she already voiced very similar characters. However, I wouldn’t be surprised if miHoYo actually saved Mamiko Noto for a shouta character, as she regularly voiced young male or effeminate characters in her career.

Another veteran seiyuu who’s bound to end up in Genshin Impact sooner or later. This is a very obvious choice. Maaya Sakamoto would definitely fit Shenhe as she has one of the coolest voices out there, perfect for these types of characters.

Maaya Sakamoto would also easily fit Yun Jin, especially her opera singer parts. Sakamoto began her career as a singer seiyuu with Escaflowne‘s OP and lead role as Hitomi in 96. But again, she might be too big for the role.

Nana Mizuki is another seiyuu who’ll definitely end up in Genshin Impact at some point. She is the biggest female singer seiyuu of all time together with Megumi Hayashibara, and could easily fit either Shenhe or Yun Jin.

However, similarly to how Itto is pretty much a homage character tailor-made for T.M. Revolution, miHoYo is probably saving Mizuki Nana for a very specific character.

Shenhe is often mistaken for an Adeptus despite being human, and Yukana would be a pretty good fit for that. Yukana can make both incredibly cool voices like C.C or extremely high-pitched voices like Tessa from Full Metal Panic, and she could easily voice either Shenhe or Yun Jin. This is one of the predictions I’m the most confident about.

Asami Sanada is yet another veteran who can voice the dumbest but cutest characters like Dejiko in Di Gi Charat to the sultry gothic lolita Kurumi Tokisaki in Date A Live. She could easily voice either Shenhe or Yun Jin, and I’m expecting her to join the Genshin Impact cast at some point.

Another no-brainer huge veteran choice if miHoYo goes for the cold and emotionless type for Shenhe. Houko Kuwashima can do so many different voices it’d be a shame to cast her now though. She’s also one of my top choices for Yun Jin.

Rider, voiced by Yuu Asakawa, is one of the most popular big sister type characters in otaku culture. This could be who miHoYo picked if Shenhe’s personality has a big sister side to it below the coldness.

Greetings, Travelers! The latest emojis from Genshin Impact are now available on HoYoLAB~

Paimon’s Paintings include a collection of chibi emojis of various Genshin Impact characters. We hope you like them! Paimon will continue to paint more cute emojis~#GenshinImpact pic.twitter.com/nqNOq0axBx

There are several other seiyuu I could have brought up, and I could easily do a top 20 of the seiyuu who could voice Shenhe or upcoming 5-star characters. I could have included several other obvious choices like Akemi Kanda, Satsuki Yukino, Mai Nakahara, Mitsuki Saiga, etc, but what do you guys think? Tell me in the comments or on Twitter @A_iyane07.

We’ll know for sure who’s voicing Shenhe and Yun Jin during the upcoming Genshin Impact 2.4 Livestream. miHoYo hasn’t announced a date yet but it’s very likely it’ll happen on December 26 seeing past patterns.