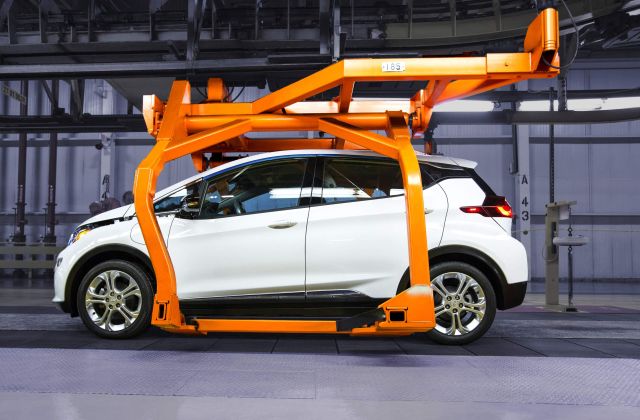 General Motors has lost confidence in battery supplier LG Chem after defective cells from the company caused a string of fires and sparked a massive recall of Chevrolet Bolt electric vehicles and electric utility vehicles.

The automaker recalled more than 140,000 electric cars and crossovers—every single one that the company has made—when it discovered two simultaneously occurring defects in the LG-made batteries. GM suspects the defects are behind the 10 fires the company has identified so far.

LG Chem makes the battery packs for every Chevy Bolt, and while the problem was initially traced to one of LG’s Korean plants, subsequent investigations revealed that other LG plants were pumping out bad cells, too.

Because the defects may be more widespread than initially thought, GM has idled the plant that makes the Bolt EV and EUV. The company is not performing any repairs on recalled vehicles, either.

“If we took the battery stock that’s in the field right now or at a warehouse, we’re not confident that it is defect-free,” GM spokesperson Dan Flores told the Detroit Free Press. “Because we are not confident that LG has the capability to build defect-free products, we’ve put the repairs on hold and we are not building new Bolts. We’re not going to start recall repairs or start building new Bolts until we’re confident LG will build defect-free products.” Ars has reached out to LG Chem for comment, and we’ll update this story if we hear from them.

The simultaneous defects—a torn anode tab and a folded separator—created a “perfect storm,” according to Greg Less, technical director of the University of Michigan’s Battery Lab. The torn tab likely created a projection within the otherwise flat cell, bringing the anode dangerously close to the cathode. The separator defect compounded the problem. Normally, the separator would keep the anode and cathode from touching, but with it folded out of the way, the batteries could short and catch fire.

Neither GM nor LG has said what caused the defects to occur. When Ars spoke with Less, he speculated that a misaligned piece of machinery might be tearing the anode tab and folding the separator infrequently enough that the problems are missed in the quality-control process. “It can’t be happening on every cell or QC would have caught it,” Less said.

Both companies have “hundreds of people” working 24/7 to identify what went wrong, according to the Free Press report. GM engineers are scrutinizing LG’s production lines while others are tearing down battery packs. GM says that LG is cooperating with the investigation, providing data on request and resources to identify the issue.

GM is reportedly working on a software tool for dealer technicians that would allow them to identify defects in a specific module. If flaws are found, the technicians could just swap out the bad module. But if they can’t figure out a way to identify the defective cells, GM says it will replace all five modules in every Bolt—but only once the automaker is confident that LG is making defect-free batteries.

Flores said that GM hopes to have the Bolt plant running again in a couple of weeks, though the company isn’t ready to commit to a date. GM estimates the recall will cost it around $1.8 billion, and it said it will be looking to LG to cover at least a portion of that sum.

Until GM and LG can trace the problem and produce enough defect-free batteries for new and recalled cars, GM says that Bolt owners should park their vehicles outside, not charge them overnight in a garage, set their maximum state of charge to 90 percent, and not let the battery dip below 70 miles (113 km) of remaining range. In some instances, Bolt owners have been successful in getting GM to buy back their cars rather than wait for new batteries.

When the new batteries are installed, GM has said that owners will receive a new eight-year, 100,000-mile battery warranty.