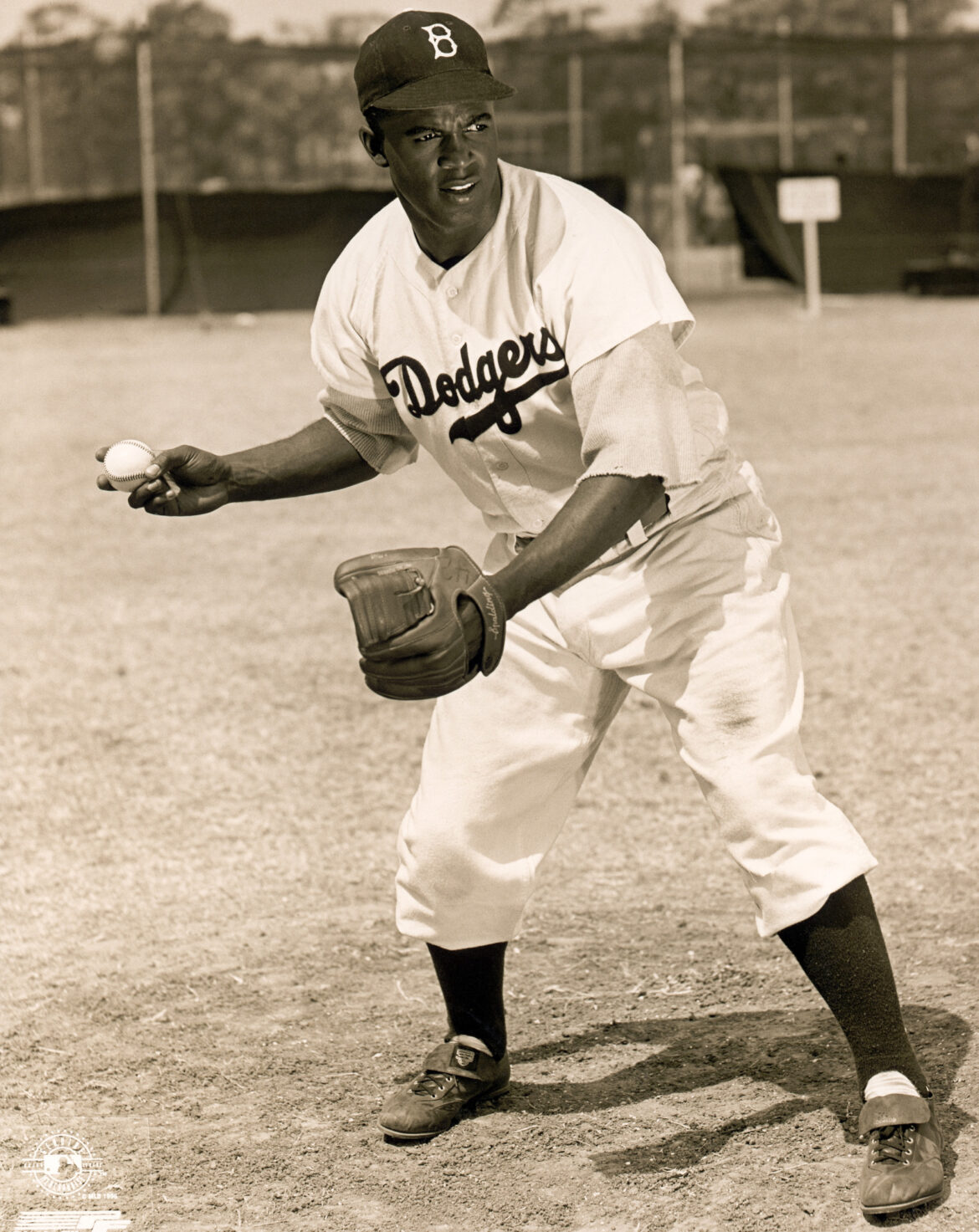 “I don’t consider myself a particularly temperamental man,” wrote Jackie Robinson in the winter of 1955, “except on this one issue of prejudice.”

On Sunday, Aug. 26, 1956, the Dodgers were playing the second of three games at County Stadium in Milwaukee. In the dog days of August, they trailed the first-place Braves by two games after winning the opener. In 1956, finishing second sent a team home after the regular season. A first-place finish meant a trip to the World Series.

Jackie Robinson was warming up with fellow Hall-of-Fame first baseman Gil Hodges when Lew Burdette threw gas on a tinder box he first stoked with his mouth in the summer of 1953.

“What time does the watermelon get cold?”

Said Robinson: “Just to make sure, I asked Gil whether Burdette meant me.” Hodges replied: “You’re ‘Number 42,’ aren’t you?

“I picked the next roller and fired the ball past Hodges into the dugout. I aimed it right at Burdette’s head. Lucky for him at missed.”

Burdette admitted opening his mouth but denied it had any racial overtones: “I was only kidding him about his weight,” Burdette told UPI, “I hollered at him, ‘What time does the watermelon get cold?’….How many men can you get in your uniform Robbie?”

“If the ball hadn’t faded,” Jackie told Dick Young of the Daily News, pointing to his forehead, “it would’ve caught Burdette right here.”

How Jackie Robinson dealt with racism

That’s how Jackie Robinson reacted to racism in the summer of 1956. The ball flew past Burdette’s ear and crashed against the dugout wall. It almost hit Joe Torre’s brother Frank, standing near Burdette at the time. The Dodgers’ super-utility man, in his final season, was playing second base, within earshot of the first-base dugout. Robinson knew what he heard on Sunday, and told the AP it was, “racially off-color.” It was not the first time Burdette’s bigotry had enraged the Dodgers. Jackie was still smoldering that Monday.

Robinson challenged Burdette to meet him outside after the game for a fight. As the Daily News aptly noted: ‘The invitation passed unaccepted.’ Declared Jackie:

“He didn’t accept the challenge. [Burdette] has no guts.”

Losing and racism, the latter is the only thing that trumps the former on a list of things Jack Roosevelt Robinson despises.

The Braves and Dodgers had a long, checkered history. It wasn’t the first time Burdette’s racist comments were at the heart of the matter. Four years of bad blood had simmered since Burdette stoked the embers of racism.

In August 1953, Brooklyn was in Milwaukee, this time with a commanding eight-game lead in National League. Duke Snider led off the eighth inning with a home run that broke a scoreless tie. Hodges, hitting cleanup, then popped out. Roy Campanella, who won the 1953 MVP, then stepped to the plate.

Burdette knocked Campy down on a high hard one with his first pitch. With the count 2-2, Burdette again came high-and-tight with a fastball. Campanella dusted himself off and promptly struck out. He then took two steps towards the visiting dugout when Burdette, allegedly cursed him out and called him the N-word.

Nonplussed, Campanella stopped for a minute. The usually docile Campanella suddenly charged toward Burdette. Catcher Del Crandall and Umpire Tom Gorman grabbed Campanella as both benches cleared. Robinson, of course, led the pack and was right in the middle of the fracas. As it usually goes with baseball fights, no punches were thrown. Robinson wanted no intermediaries in 1956. Famously even-keeled, the serene Campanella’s uncharacteristic reaction showed the destructive gravity of that word. Kentucky’s Lexington Journal took no issue with printing the N-word while removing the other expletives.

“I would have hit him with that bat on his head,” Campanella bristled, then quickly caught himself – “No, I wouldn’t,” he smiled.

The pleasant Hall-of-Famer, who was deadened in a 1957 fender bender, was fabricated like a bull during his playing days, 5-foot-9 and 200-pounds of strong muscle: “It was the most terrible thing I was brought in the major associations,” said Campanella, who attempted to diffuse the circumstance in the press. His underlying response was to not guarantee anything occurred.

However he later denied it, as per Jackie, Gorman said, “nothing would have occurred on the off chance that Burdette hadn’t called Campy a name.” Campanella guaranteed Gorman asked Burdette for what valid reason he began the skirmish with his mouth.

The dad of current MLB umpire Brain Gorman later told the Brooklyn Daily Eagle: “Assuming Campy continued onward back to the seat nothing would have occurred,” likewise denying his remark to the Dodger catcher. Umpire Jocko Conlon, the group boss added: “In the event that that is the case then Burdette didn’t say it and my report will contain no notice of it.”

Burdette and Robinson had words quite recently seven days sooner later, Burdette considered Robinson a “Dark — – .,” as indicated by The Eagle. Jackie likewise asserted that Burdette tossed at him after the Dodgers secured the 1952 flag.

“Perhaps it was the initial time Campy heard it, however it wasn’t whenever he’s been called it,” First said Robinson. This was more similar to the prideful Jackie’s natural response to bigoted way of talking. Once allowed to express his real thoughts, Robinson was never quiet on issues of race. Campanella frequently decided not to make some noise which irritated Jackie. The two later had a run in.

In 1947, Jackie wryly smiled while standing next to Ben Chapman for a photo after the Philadelphia Manager’s racist taunts drew the ire of the players and press alike. Jackie quietly posed for a picture at the Phillies’ request and looked the better man. One can see the visage of contempt through Robinson’s smirk, in contrast to meek Chapman’s emotionless stare. That incident helped galvanize empathy among many who were initially resistant to Robinson’s presence.  As Carl Rowan and Jackie describe in Wait Till Next Year, years later Chapman chided Jackie and Pee Wee Reese during an exhibition game. “I can talk back now,” said Robinson. He called Chapman a “yellow son-of-a-b—,” and threatened to beat him up. According to Pee Wee, Chapman shriveled up like a snail. “I felt good right down to my toenails,” said Reese. “This guy got what was coming to him…we never heard another peep.” Back in 1953, Burdette issued a tacit denial. He claimed he neither threw at nor used an epithet toward either Campanella or Robinson. I’m more interested in that than what Robinson has to say.” Robinson had the last word. The Dodgers took the final game of the series and two of three. They won the 1956 National League Pennant by one game before losing their final World Series in Brooklyn 4-3 to the Yankees. After the Yanks Don Larsen pitched his perfect game, Robinson singled with two outs in the 10th inning of Game 6 to send the series to a final game.