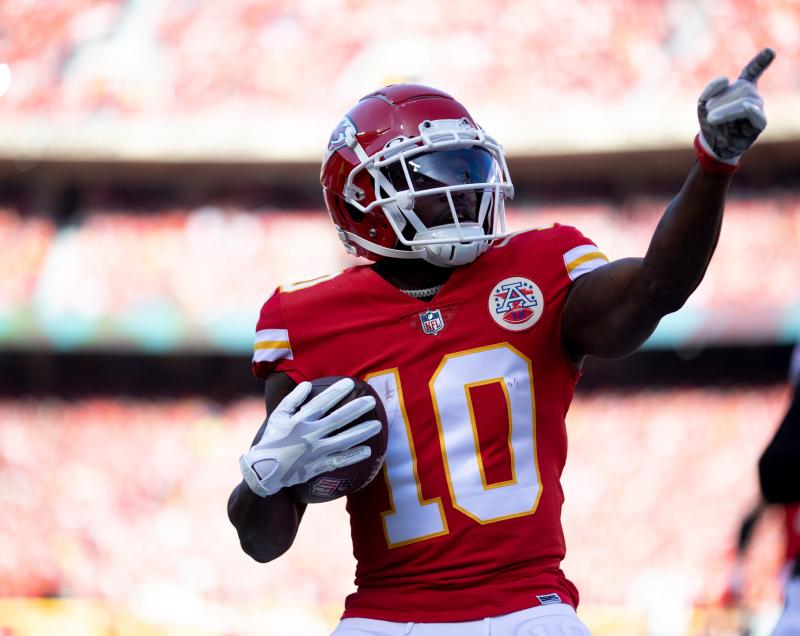 All great things must come to an end, including the era of the Kansas City Chiefs Super Bowl LIV-winning trio of Patrick Mahomes, Tyreek Hill and Travis Kelce.

The salary cap-strapped Chiefs traded Hill to the Miami Dolphins on Wednesday in exchange for first, second and fourth-round picks in the 2022 draft, plus fourth and sixth rounders in 2023, per ESPN’s Adam Schefter. The trade came suddenly after contract extension talks between the Chiefs and Hill fell apart.

Hill finished seventh in the NFL in DYAR in 2021, the fourth top-10 finish of his six-year career.

He’s the NFL’s most electrifying big-play threat and one of its most thrilling players to watch.

The Dolphins appear to be throwing their hats into the ring as short-term AFC contenders. (Free agent receiver Will Fuller is not expected to return). On paper, the new Dolphins receiving corps looks better than even the Hill-Kelce-Sammy Watkins Super Bowl LIV arsenal.

Now, about the quarterback.

Hill can both unlock the Dolphins’ deep passing attack and contribute in a 49ers-style catch-and-run game. His presence will also open up opportunities for other receivers. Tagovailoa is almost certain to succeed with the rebuilt Dolphins playmaking corps, because Chase Daniel’s accountant could succeed with the rebuilt Dolphins playmaking corps. If he somehow cannot, Teddy Bridgewater was signed as a fail-safe Jimmy Garoppolo surrogate.

The Chiefs now have two first-round and two second-round picks in the 2022 draft, and they need them. Cornerbacks Charvarius Ward and Mike Hughes headline the free-agent departures from a defense which finished 24th in DVOA but was historically bad for part of the year.

So the Chiefs traded one superstar for the necessary resources to rebuild an entire defense. In that respect, the Hill trade is downright practical. But it also robs the Chiefs of their mythic, magical quality. Now the Chiefs are just another NFL team, quantitatively still among the contenders but qualitatively no different from everyone else.

The Hill trade has an impact that extends beyond the Dolphins and Chiefs:

The 2022 AFC playoff race looks as wide-open an unpredictable as any we have seen since before Tom Brady led the Patriots to supremacy. Yes, we know the Bills will be at or near the top. But there are nearly a dozen teams who could be up there beside them. And even the Dolphins are now on that list.