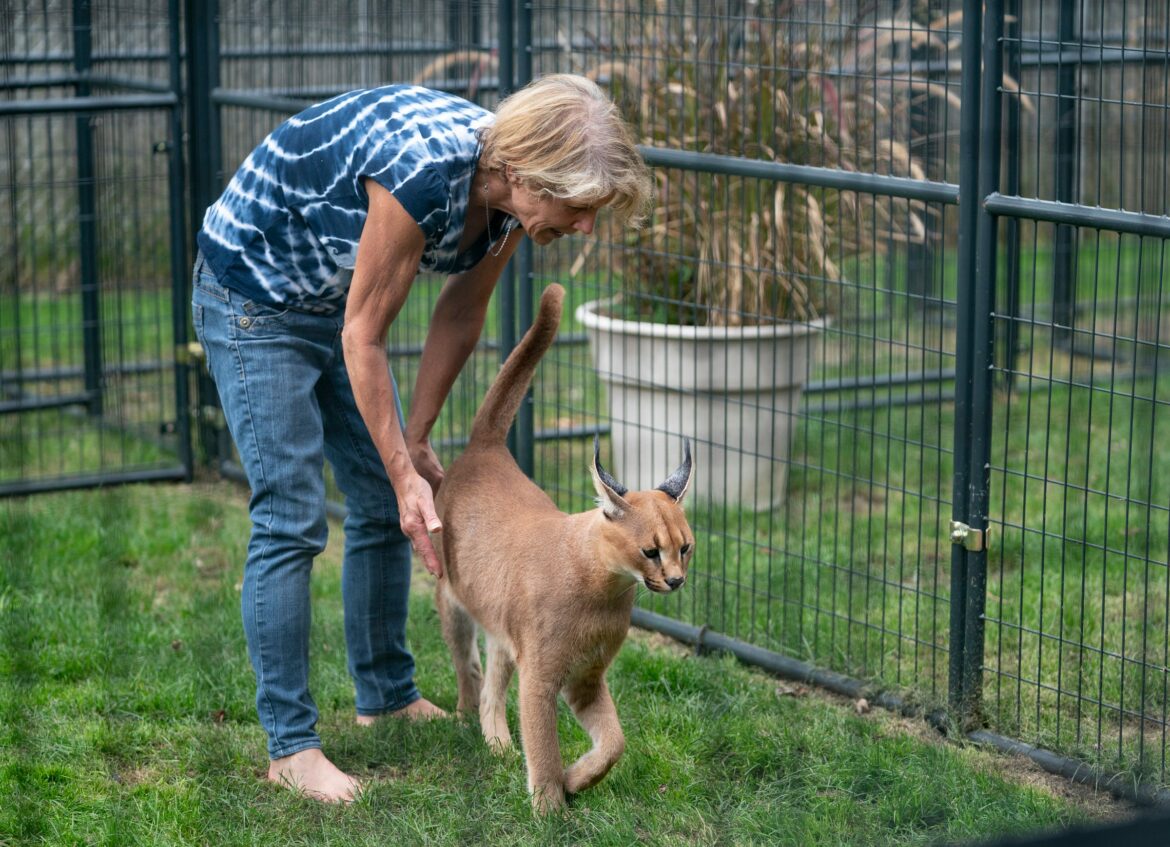 Until it was captured, a suburban hunt for a 50-pound carnivorous cat named Bam Bam on the loose in Royal Oak, Michigan, dominated the news cycle.

Now, however – at least for Bam Bam’s human mom – comes the heartbreak.

It is an example of the challenges officials face nationwide – from invasive snakes in Florida to monkeys in California – in protecting neighborhoods, the environment and the rights of pet owners.

Westfall, 62, owns four African caracals total – Bam Bam and Pebbles, Wasabi and Fire – and has spent, she estimates, $50,000 or more purchasing them and setting up enclosures for them in her backyard and garage.

On the verge of tears, Westfall explained how she came to own the caracals – two from Africa and two from Florida – and how, despite how they’ve been characterized, the felines are gentle.

Meanwhile, Royal Oak police have issued Westfall five citations and given her, according to the police chief, until Monday, to make sure the cats leave the neighborhood.

In response, Westfall said she’s not sure the police have the authority to make such a demand. And even if they do, Westfall said, she doesn’t know where the cats could even go. They’re not like house cats.

“They’ve got to be gone by Monday – all of them,” she said. “This is not just, ‘Here, take my kitty.’ This is ‘take my cat, my big cat, and take care of it for the rest of its life or until I can come get it.’ It is a responsibility. You can’t just hand it over to anybody.”

Westfall said she’s terrified that law enforcement will just come to her home and seize her fur babies – never to be seen again.

“Right now, those doors in the kennel are padlocked,” Westfall said. “The cats won’t go out in them because they are so traumatized. All of them. They are huddled together in the basement. That’s how traumatized they are.”

She added: “And I’m supposed to pick them up and move them by Monday?”

Westfall acknowledges that some of the cats got out of their enclosure.

She doesn’t quite know how they got out of their elaborate setup with high fencing and locks. She didn’t do it. And she doesn’t blame her kitties, and readily admits the escape was the result of “human error.”

“I’m only human,” she said. “It’s my responsibility, ultimately.”

According to the police, this wasn’t the first time Westfall’s cats have gotten loose.

There’s also some disagreement about how many cats on Wednesday got out of their enclosure.

Westfall said just two caracals that got out, while police said it was three.

In any case, what seemed to set off alarm bells for residents is when police contacted the Royal Oak school district Wednesday to warn the missing caracal was seen around an elementary school.

Residents were warned to stay away from it.

‘There’s zebras in our backyard!’:After escaping a farm, zebras are roaming a Maryland neighborhood

Caracals are characterized by a short face with two black stripes extending from the forehead to the nose, white patches around the eyes and mouth, and tufted ears. Their fur is reddish tan or sandy colored.

They hiss — instead of meow — and eat small mammals, rodents, and birds.

Westfall said she got the cats two years ago after five years of research. It was her dream, she said, to have these cats as pets and raise them. “Everybody loves them.”

“I don’t have any kids,” she said. “I have four-legged animals. These are my kids.”

The frenzied search for Bam Bam ended at about 10:30 p.m.

Police officers had been on the lookout for it in the neighborhood all day and into the night with flashlights. Westfall also lured one of the other cats back to its enclosure using raw meat.

Heather Ineich, with South Lyon Murphy Lost Animal Recovery, caught Bam Bam , who was in a partially fenced backyard about two blocks away from home. Once she shooed the police away, she lured it into a trap.

In the dark, she could see its glowing eyes.

“Gotcha,” Ineich posted on Facebook, referring to the cat a “little Houdini.”

Ineich said she thought the situation had been blown out of proportion, mostly she said, because when the police got involved, they made it seem like a vicious animal was terrorizing the city.

After all, Ineich said, it’s not illegal to own caracals.

And Royal Oak police have said that, according to the Department of Natural Resources, caracals do not fall under the exotic cat classification and are unregulated.

Westfall, who loves her cats, is still taking what happened in, calling her ordeal hell.

“I don’t have an attorney,” she added, noting that everything has happened so fast. “One contacted me, but I haven’t called her back. I don’t even know the first person to call. Somebody help me!”