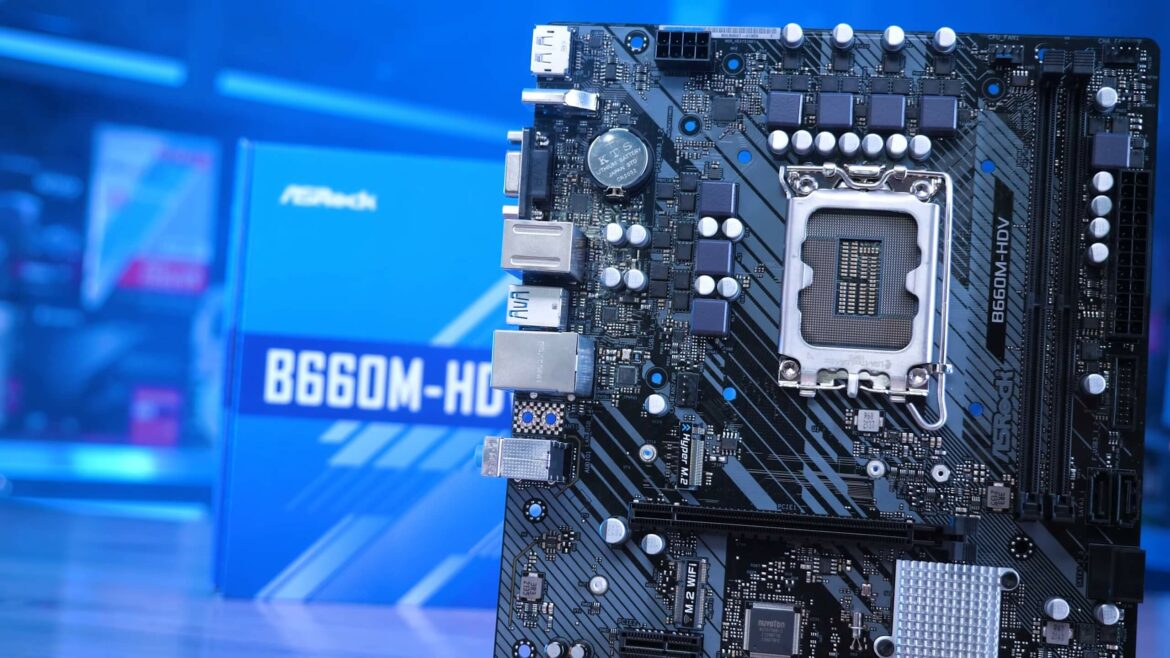 In testing new Intel B660 motherboards for an upcoming VRM temperature roundup, we felt compelled to stop and take a look at the Asrock B660M-HDV, only because Asrock is at it again, misleading consumers with a garbage product. If you missed it, last year we purchased the Asrock B560M-HDV for some testing and found it failed to run a number of 11th-gen Core series processors at the minimum specification, despite advertising support for them.

In short, the motherboard enforced a hard PL1 of 100W which massively limited performance, resulting in significantly worse results than boards that cost $10 or $20 more. Horrible performance aside, our primary concern with this product was the false advertising, as it failed to meet the minimum specification of the 125W CPUs it claimed to support. Non-K parts on the other hand, like the Core i7-12700 which are technically 65W parts — but also not really — still suffer from a loosely defined spec, which can see them clock as low as 2.1 GHz on the P-cores for AVX workloads, though without power limits should maintain an all-core frequency of 4.5 GHz, which is a 114% increase over the base frequency. The Core i9-12900K, for example, has a minimum clock frequency target of 3.2 GHz which it can sustain during all workloads. Anything less than this is out of spec. Now whether or not anyone would pair a board like the Asrock B660M-HDV with the Core i9-12900K is entirely beyond the point. Frankly, it’s unlikely anyone would, but that doesn’t make false advertising okay. You can’t claim support for anything you can’t run within spec, and let’s take a look at how the B660M-HDV supports the 12900K…

Before we get to the graphs, let’s talk about the test conditions. For this testing and any future LGA 1700 VRM thermal testing we’ve built a dedicated system inside the Corsair iCUE 7000X case. Powering it we have the HX1000 power supply and the iCUE H170i Elite Capellix for cooling. Then at the top of the case is the H170i 420mm radiator with three 140mm exhaust fans. This is a high-end configuration, airflow is good, and in a 21C degree room I’d say this is an optimal setup, which we’re going to call “standard airflow.” For this test we also have a “direct airflow” configuration, which includes an additional 120mm fan covering the VRM. This is without question an absolute best case scenario for any system.

For recording temperatures we’re using a digital thermometer with K-Type thermocouples and we’ll be reporting the peak rear PCB temperature. Starting with the standard airflow test, we see that the B660M-HDV heavily throttles the 12900K in both test configurations. With the 65W limit, the CPU averages a clock frequency of just 2.42 GHz and at 95W that increases to just 2.54 GHz.

The reason for the small increase is due to the board’s inability to maintain a 65W output due to thermal throttling. We were measuring a rear PCB temperature of 104C. 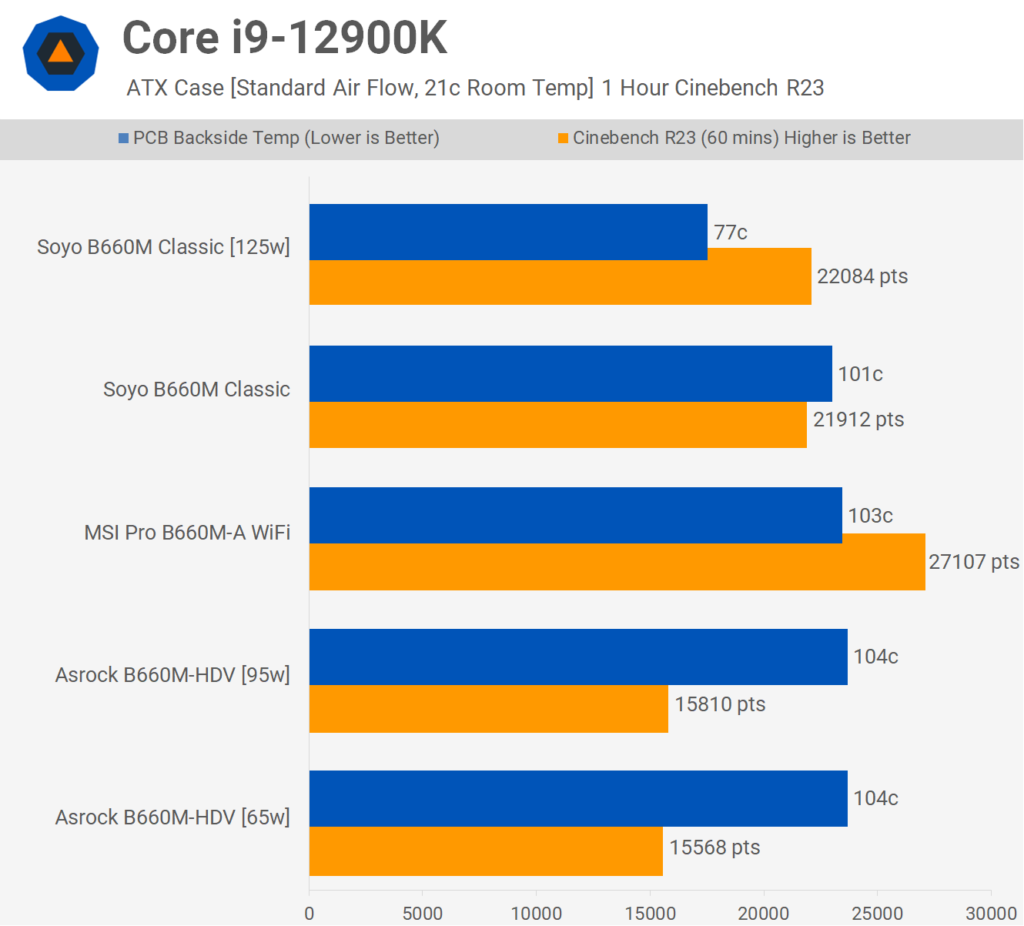 Unfortunately, removing the power limits wasn’t useful with the Soyo board as this resulted in VRM throttling with slightly reduced performance overall, while increasing the VRM temperature of 101C. Not a great result overall, but it was within spec and miles better than the Asrock board. 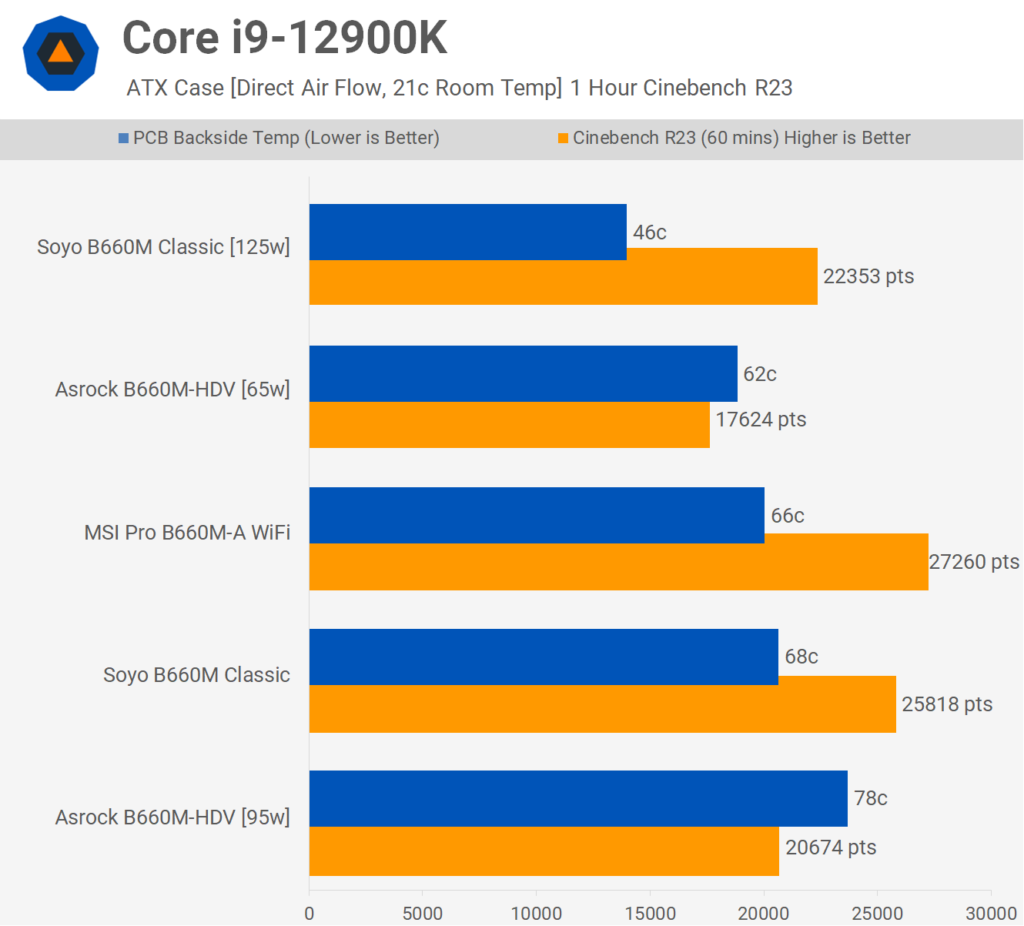 If you deem that a pass, so be it. But when compared to the similarly priced Soyo B660M Classic, the B660M-HDV is a bad joke.The Soyo board did still throttle the 12900K down to 227 watts, but performance was acceptable overall.

But how does it go with a more realistic CPU configuration, using the locked Core i7-12700?
Let’s go find out…

Using our standard airflow configuration, which we feel is a realistic optimal airflow setup, we see some serious performance discrepancies again. The B660M-HDV limited the 12700 to an average clock speed of just 2.6 GHz in our hour-long test, using the stock 65W configuration as well as our manual 95W setting. This limited performance to around 12900 pts.

That’s bad because this CPU running at its base 65W spec should score around 15400 pts as seen on the MSI Pro B660M-A, resulting in an average clock frequency of 3 GHz. The MSI board managed this with a VRM temperature of just 46C. Meanwhile, the Asrock board ran up around 100C for a much worse result. 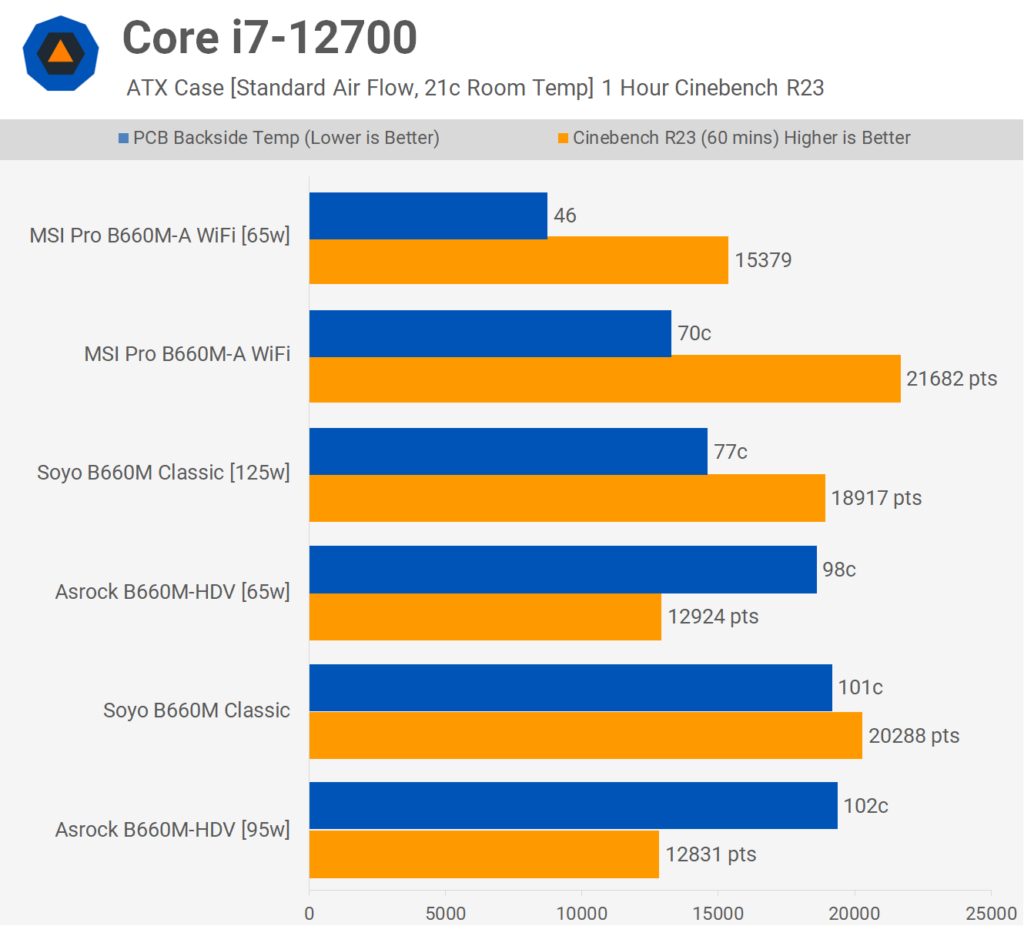 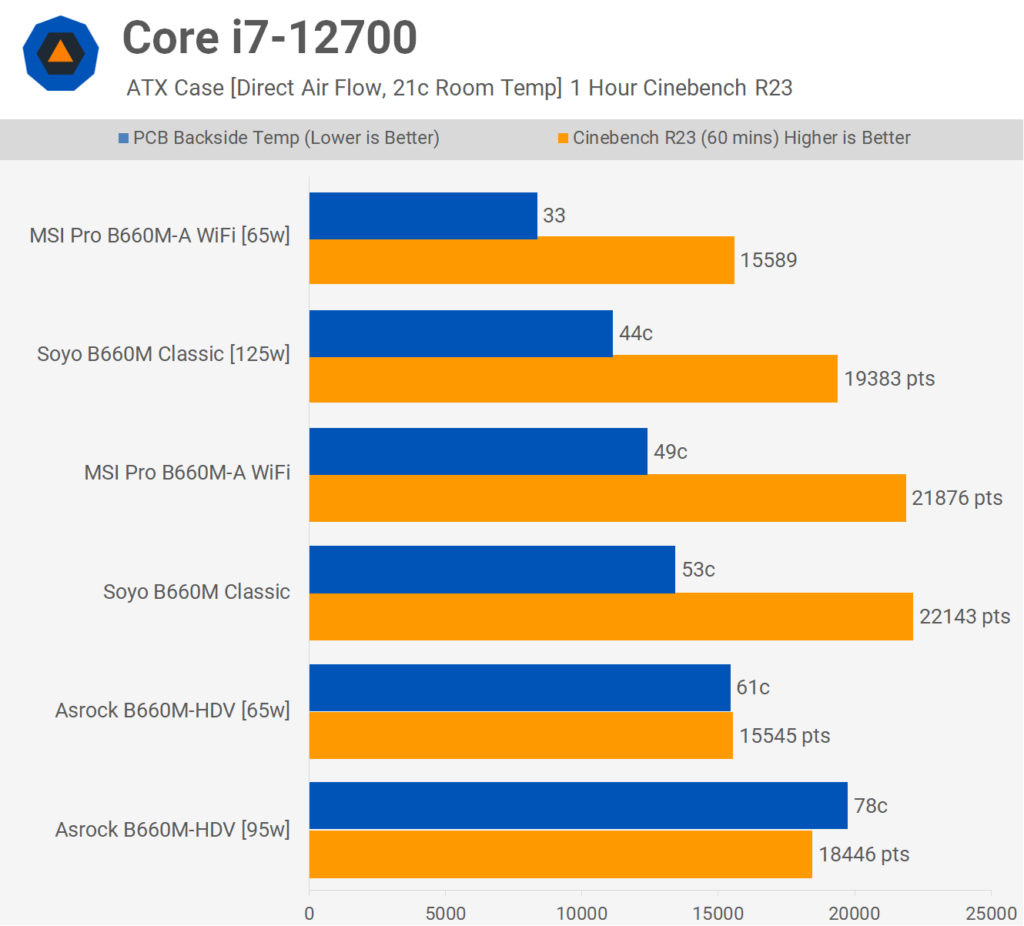 With the aid of direct airflow, the B660M-HDV performs a lot better. 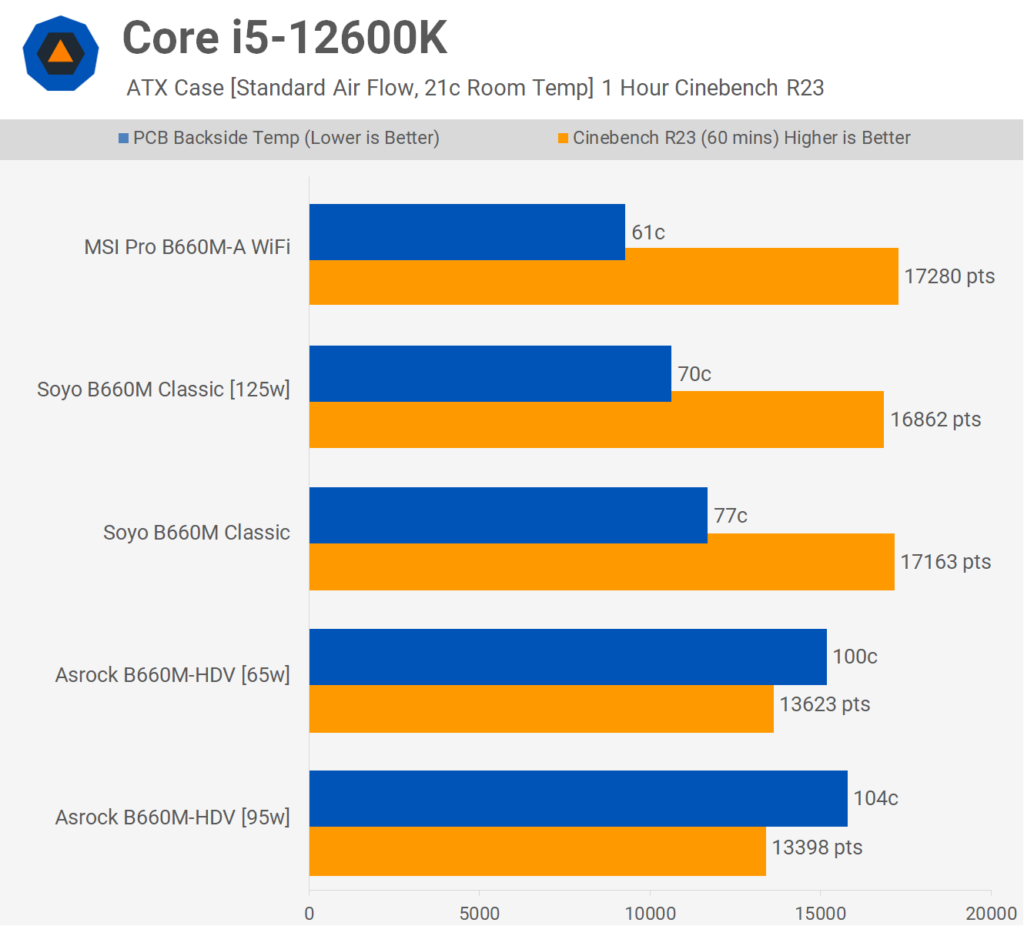 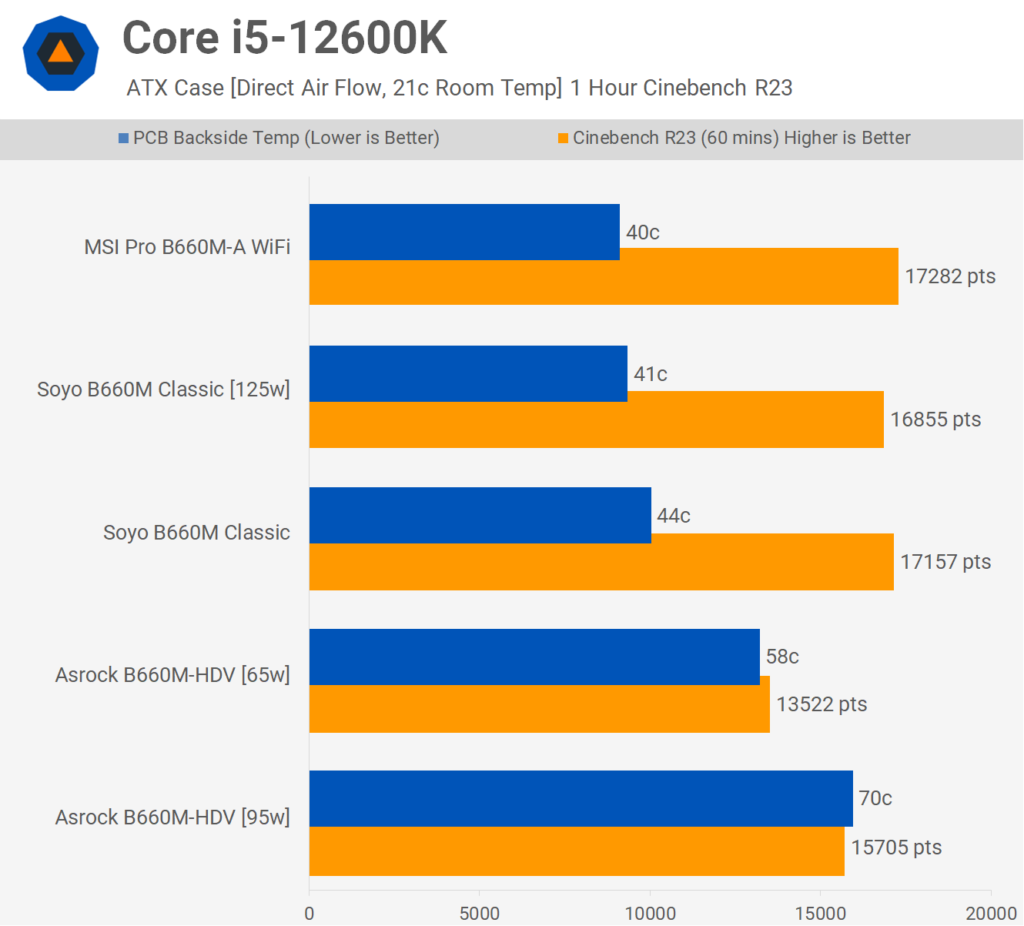 For those of you wondering, we did install the budget-minded Core i5-12400 and as expected it was limited to a PL1 of 65W out of the box.

We believe Asrock is at best misleading consumers with the B660M-HDV, and at worst falsely advertising the board’s capabilities. As it stands the only disclaimer Asrock gives is the following:

For cooling the CPU and its surrounding components, please install a CPU cooler with a top-down blowing design.

You could claim we didn’t follow their guidance by not using a box cooler, but I don’t see how that changes the fact that a 95W PL1 means it’s impossible to run parts like the 12900K at the base spec. We also tested in a high-end case with high-end cooling. Ideally though, we’d rather boards like this simply didn’t exist at all. Soyo’s also proven it’s possible to produce a B660 board at this price point that isn’t hot garbage. We’re also expecting the Asrock B660M-HDV to be the bottom of the barrel when it comes to Intel B660 boards. We do have 20 boards on hand and you’ll see the results of all those tests soon, so stay tuned.