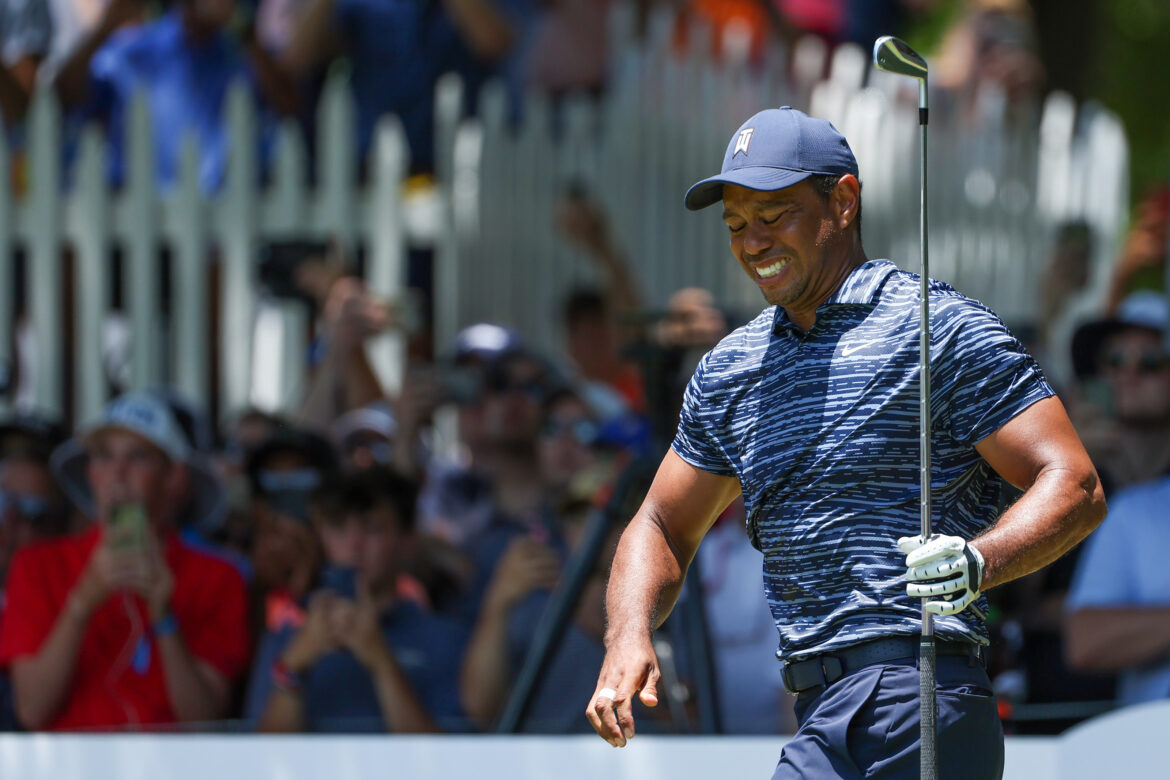 From the start, the Tiger roars came back to Southern Hills and the PGA Championship. Then the pain set in.

Tiger Woods sent the massive gallery into a frenzy on the 10th hole, his first of the 104th PGA Championship, when he hit his second shot to the par-four to three feet and made birdie. He made a 13-footer for birdie at the par-three 14th to get to two-under on his round. For a brief moment, his name was on the first page of the leaderboard.

But this isn’t 2007, when Woods lipped out a putt for a 62 on his way to winning here. He has a new reality, one forged by numerous back surgeries and a fractured leg, and he found out on Thursday it isn’t going to be that easy.

Woods limped, literally, to the clubhouse after those two birdies, shooting a four-over 74 to sit in a tie for 96th place. He’s already nine shots behind leader Rory McIlroy, who, playing in the same group along with Jordan Spieth, opened with a 65. Woods almost certainly won’t be winning another major championship this week. The way he looked at the end of the round, he may not even finish the tournament.

On the eighth hole, his 17th, he lifted his leg off the ground as his tee shot on the par-three went well right into a bunker. His bunker shot rolled over the other side of the green and he ended up with a bogey four. Then, on the ninth hole, again with an iron in his hand, he slouched over immediately and grabbed the back of his leg. He got a break when the shot bounced off the trees and back into the fairway, but his approach flew over the green and he made another bogey, his seventh of the round.

PGA Championship: Tiger Woods determined to play through the pain

Woods tried to clench his teeth and grind his way through it, but the leg he shattered in his car accident 15 months ago is still clearly bothering him. A normal player would consider withdrawing from the tournament, preserving his body for another day. Woods, though, isn’t an average player. He won the U.S. Open on a broken leg. He’s not going anywhere besides to get an ice bath after his round.

“My leg is not feeling as good as I would like it to be. We’ll start the recovery process and get after it tomorrow,” he said following his round.

“I just can’t load it. Loading hurts, pressing off it hurts, and walking hurts, and twisting hurts. If I don’t do that, then I’m all right.”

Woods found his most trouble out of Southern Hills’ bunkers. Four times he failed to get up and down from a greenside bunker. Hitting out a bunker requires a golfer to bend down, to establish a solid base with his legs. Woods can’t do that just yet. He lost 2.06 strokes around the greens, sixth-worst of the players in the morning wave.

As Woods stumbled, his playing partner soared into the lead. McIlroy birdied four holes in a row on his first nine and didn’t make a bogey until the sixth, his 15th. His five-under 65 is his lowest in the first round of a major championship since he won the PGA at Valhalla in 2014. Of the previous three times he opened a major with a 66 or better, he won all three, according to Justin Ray.

It’s been eight years since McIlroy won a major, a maddening stretch for a player as talented as he is. He hasn’t led at this point in a major since the 2014 Open, which he also went on to win. He’s a quarter of the way there, swinging freely, bombing drives, and even holing a few putts.

Woods, meanwhile, is simply looking for the nearest bucket of ice and hoping he feels better tomorrow.