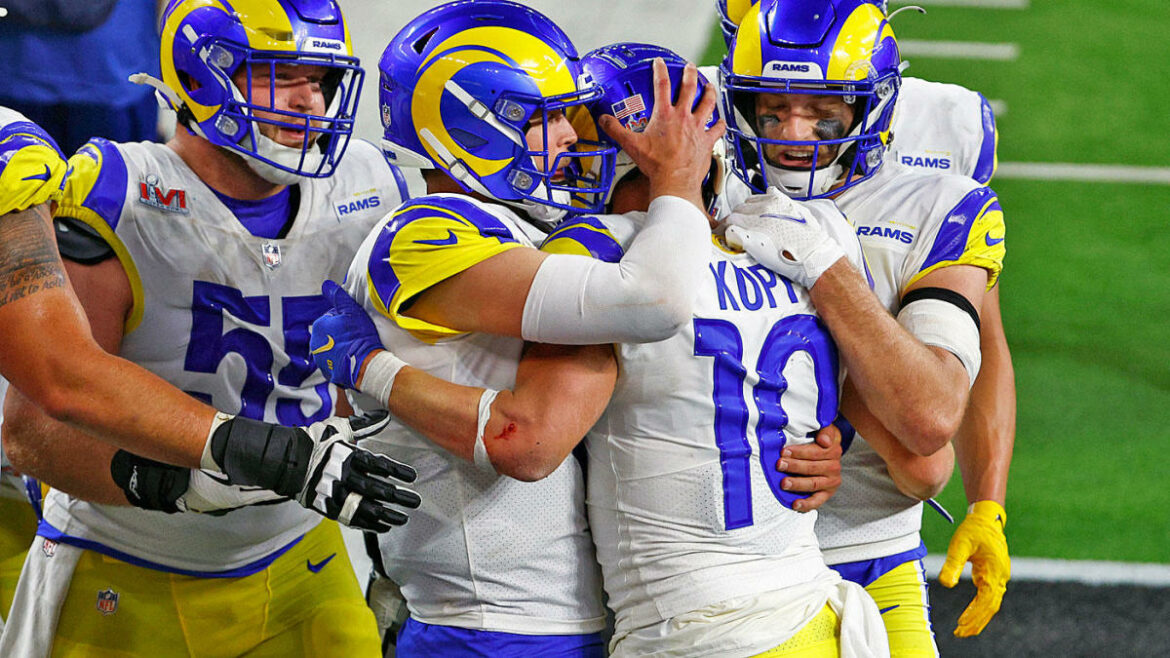 With their backs against the wall late in the fourth quarter, the Los Angeles Rams turned to the connection that spearheaded their offensive attack all year.

Matthew Stafford targeted Cooper Kupp six times on the eventual game-winning drive with the duo linking up one final time for a 1-yard touchdown go cap a 15-play, 79-yard trek and take a 23-20 lead over the Cincinnati Bengals with 1:25 to play. Ultimately, that margin held as the Rams claimed victory in Super Bowl LVI and captured the second Lombardi Trophy in franchise history.

Overcoming two Stafford interceptions and a controversial Cincinnati touchdown to start the third quarter, Los Angeles became just the second team in NFL history to win a Super Bowl on their home field, SoFi Stadium. The previously unachieved feat has now been accomplished in consecutive seasons.

The Rams were led by an uneven but gutty effort from Stafford, who completed 26 of 40 passes for 283 yards with those two picks, and Kupp, who caught eight passes for 92 yards and two of those three scores en route to MVP honors. Stafford’s first touchdown of the game went to Odell Beckham Jr., who left the contest in the second quarter due to a non-contact knee injury and never returned.

Donald, Miller, Leonard Floyd, and A’Shawn Robinson dominated the game in the second half, repeatedly pushing their way into the Bengals backfield to bother Burrow. Donald sealed the game by powering his way through the offensive line and wrapping Burrow in his arms, forcing an errant throw that fell to the ground incomplete on fourth down.

Burrow completed 22 of 33 passes for 263 yards and a touchdown, while Cincinnati running back Joe Mixon (72 yards rushing) also tossed a touchdown pass. Both scores were hauled in by Tee Higgins, who caught four passes for 100 yards.

The game changed immediately out of halftime when, on the first play from scrimmage in the third quarter, Burrow hit Higgins deep down the sideline for a 75-yard touchdown. Higgins’ score was immediately marred in controversy, however, as replays showed he clearly grabbed a hold of cornerback Jalen Ramsey’s face mask. No penalty was called on the play.

That score gave Cincinnati its first lead at 17-13. The Bengals increased their advantage to 20-13 before the Rams closed the door with the final 10 points of the game.

Let’s take a look at some takeaways from the Rams’ second Lombardi Trophy and the Bengals’ incredible season that concluded with a thud.

Why the Rams won

That defensive line! Donald could’ve easily garnered Super Bowl MVP consideration because, when he wasn’t sacking Burrow — he downed the Bengals QB twice and all but logged a third to seal the victory — he was helping clog the trenches on key downs.

Robinson, Miller and Floyd also stayed busy up front, combining to give the Rams seven total sacks in a defensive game. On a night Ramsey wasn’t at his best covering star Cincinnati wideout Ja’Marr Chase, the L.A. line really won the day.

Kupp helped the offense do just enough, too, particularly on the Rams’ final drive when the crisp route-runner consistently beat Bengals CB Eli Apple in the red zone. While Stafford really struggled to stay in sync after a hot Beckham left the field before halftime, he opened the game efficiently and finished strong, overcoming a nonexistent ground game to keep Kupp involved and bring the Rams their first title since 1999 (Tennessee Titans, Super Bowl XXXIV).

It wasn’t an altogether pretty performance, but the Rams got gritty when they needed to. You could even say they went “all-in”.

Why the Bengals lost

The Burrow experience never really took off. After missing some early open shots, possibly due to nerves, Burrow fell victim to the Rams’ pass rush, especially on key downs.

The Bengals, despite steady running from Mixon, a trick TD pass from the running back and a few splashy catches from Chase working on Ramsey, went just 3 of 14 on third downs.

Four penalties, including a killer red-zone holding and a post-touchdown celebration by inactive player (!) Vernon Hargreaves III, didn’t help. It wasn’t an entirely bad performance, but it was pretty ugly, and they just weren’t opportunistic enough to make up for it.

The Bengals faced a third-and-9 from their own 40 with just over 6 minutes to go, up 20-16. Burrow laced a short pass over the middle to slot receiver Tyler Boyd, typically a sure-handed target, but the ball went right through his mitts. Cincy still got another chance with the ball, but by that point, it had just over a minute to operate with L.A.’s D-line dialed in and the game in its hands.

Play of the game

It didn’t win the Bengals the trophy, but it sure had Cincy buzzing at the time with Mixon tossing a perfect TD pass to Higgins after getting the pitch in the red zone. Super Bowl trickery is the best kind of trickery:

The Rams have won their first Super Bowl in two decades. You can now buy Rams Super Bowl championship shirts, hats, jerseys, hoodies, and much more to celebrate the historic win. Get gear here now.