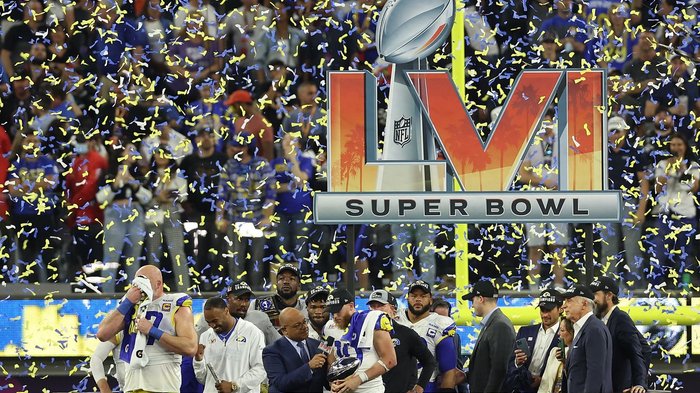 The Los Angeles Rams are Super Bowl LVI champions after a 23-20 win over the Cincinnati Bengals on Sunday at SoFi Stadium.

This live blog from The Athletic follows game updates, coverage and everything else surrounding Sunday’s event in Inglewood, Calif., including the Super Bowl halftime show. Catch up on this week’s Super Bowl-related news and the 2022 NFL Honors, too. The Athletic also ranks the best and worst 2022 Super Bowl commercials.

Want a free subscription to The Athletic? Sign up for BetMGM, bet $10 and win $200 in free bets plus a free year-long subscription (or renewal).

Super Bowl media review: Al Michaels has still got it

If Sunday was an audition for what Al Michaels — who was calling his 11th Super Bowl — can do heading forward, well, it was a little like John Lennon after the Beatles’ rooftop concert in 1969 at their Apple Corps headquarters in London.

Michaels passed the audition. He was unsurprisingly excellent on Sunday night and continues to call a quality game at 77. Michaels has always had a great feel for adding something beyond his call, and here was an example of that. After Cooper Kupp’s 20-yard reception with 8:46 remaining in the first quarter, Michaels gave you a small but interesting nugget that Kupp was the only player other than Aaron Rodgers and Tom Brady to receive an MVP vote.

The “Sunday Night Football” team has earned a reputation as being the gold standard of NFL production, and everything on Sunday reaffirmed that assessment. The most important questions for a production: Did they fully document the game? Did they provide you as a viewer what you needed for the plays that determined the outcome. On both accounts, the answer was yes.

Von Miller on Aaron Donald: ‘Can’t see him walking away from this’

“I don’t know, man,” Miller said of Donald considering retirement. “He’s done everything you can possibly do. But this feeling here, there’s nothing like it. It’s addictive. Once you feel this — coming to the Super Bowl is one thing. But winning it is different. And we’ll just have to see.

“He’s done so much. But I’ll tell you, this feeling is great. It just makes you want it more and more and more. But he’s definitely capped off a great career, if he chooses to do that. But this is an addictive feeling and I can’t see him walking away from this.”

Eric Weddle opens up on ‘wild and crazy’ return to NFL

Weddle, who tore his pectoral muscle in the first half but finished the game, was all smiles on the podium after capping his brief un-retirement with a Super Bowl title.

No wide receiver has done what Kupp did in the regular season and postseason. In fact, his scrimmage yards and touchdowns put him on par with two Hall of Fame running backs.

Burrow’s message after the loss

Joe Burrow finished the Super Bowl 22 of 33 for 263 yards and a touchdown. He will have his knee checked out on Monday.

Less than three hours after his team clinched a Super Bowl victory, the Rams wide receiver was holding a newborn boy. Samaria, his wife, went into labor and left the stadium for the hospital during the game.

Nothing but love for Detroit

If Matthew Stafford was finally going to get his Super Bowl ring, it really had to happen like this: a hobbled Stafford, trailing in the fourth quarter, needing a late drive to win the whole thing. How many times did Detroit fans see that same script over the years?

The first time the Lions saw that magic came in Stafford’s eighth NFL start, against the Browns, when he was just 21 years old. After taking a hit that rendered his left arm almost immobile, Stafford fought off the team’s trainers to get back on the field and then threw a last-second, game-winning touchdown to Brandon Pettigrew.

It was rough in those early days. Stafford started just three games in 2010, as that ugly “injury-prone” tag started to swirl around him. He came back in 2011 to lead the league in passing attempts and guide Detroit to a surprising playoff berth.

Those images from Sunday night — Stafford on stage, wearing a Super Bowl hat after the Rams beat the Bengals 23-20, bathing in confetti — were what Lions fans dreamed of for so long. That they came with Stafford sporting Rams colors had to dredge up some conflicted emotions. (You’ve seen the “Detroit Rams” T-shirts, right?)

After 12 years with Stafford as the face of the Lions franchise, how could they not?