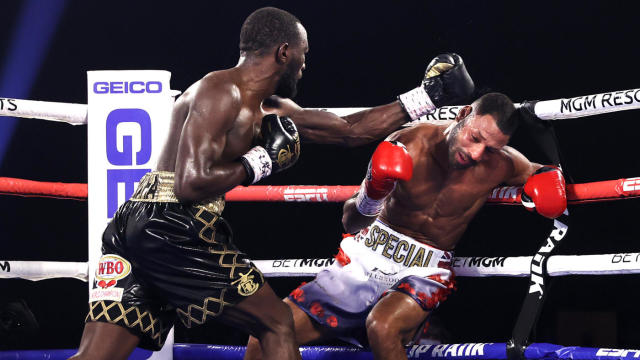 Amir Khan simply despises Kell Brook. He has for years. With the pair officially set to square off on February 19th, in Manchester Arena in the United Kingdom, Khan is anxiously checking the hourglass as their showdown gets closer and closer.

While Khan has openly admitted to loathing his rival, he does acknowledge his overall skills. In fact, with their contest roughly one week away, Khan believes that his showdown against Brook is almost like fighting a slightly lesser version of himself.

“We have very similar styles,” said Khan to a group of reporters. “He’s very explosive at times but I don’t think he has the same work rate as me or has the same speed as me.”

Brook, 35, used his previously mentioned speed and power, as well as his overall skills and durability, to snag the IBF welterweight crown against Shawn Porter in 2014. During his near three-year championship reign, Brook would go on to defend his title a total of three times. However, since then, Brook has suffered brutal stoppage defeats at the hands of Errol Spence Jr., Gennadiy Golovkin, and most recently, Terence Crawford.

In bouts against Golovkin and Spence Jr., Brook showed tremendous heart and an iron chin before succumbing to their nonstop offensive onslaught. However, during Brook’s showdown against Crawford, the pound-for-pound star stunned the British product with a jab in the fourth round. From there, Crawford landed several unanswered blows before referee Tony Weeks was forced to call a halt to their contest.

Khan, of course, watched closely as he witnessed Brook meet his untimely demise. At one point, Khan viewed Brook as having a high threshold for pain. At this point in his career, nonetheless, Khan suspects that the damage Brook has endured throughout his career has caught up with him.

“Honestly speaking, I don’t think Kell has a good chin or can take a good shot. I think his punch resistance is gone, literally gone.”