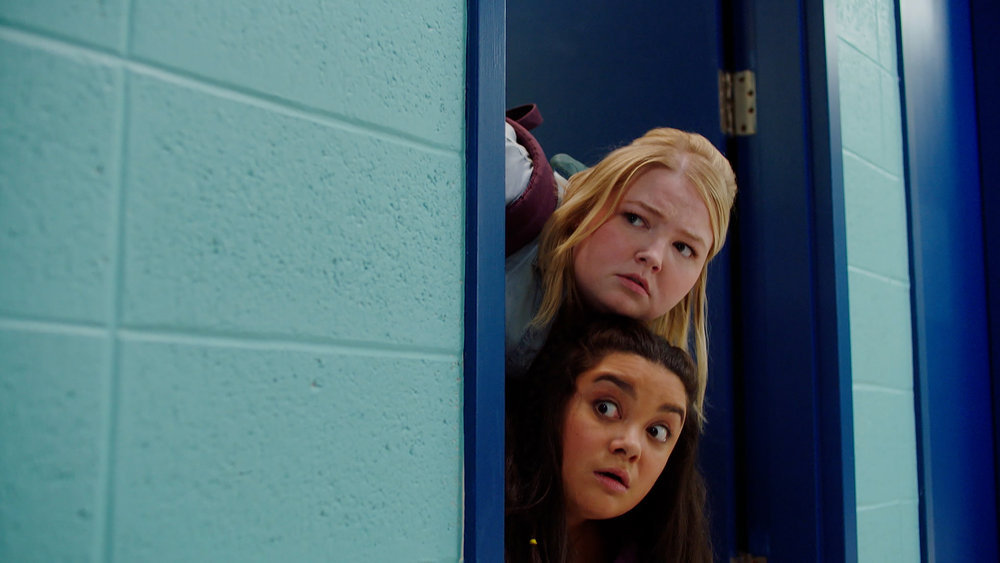 Astrid and Lilly Save the World wrapped its first season tonight on SYFY. While we wait for news on a potential second season (fingers crossed!), we have a fun post-mortem chat to share with you featuring the show’s stars, Samantha Aucoin and Jana Morrison, who play Lilly and Astrid.

I previously interviewed Aucoin and Morrison shortly after the show first aired, and you can read that interview here. It was great to reconnect with them and discuss all the fantastic things about this season and what our hopes are moving forward. Whether you’re a fan of the FortWell ship (Lilly and Candace) or Astrid/Sparrow (or both!), you’ll find plenty of details shared below from these two talented actresses!

SPOILER WARNING: The following article contains spoilers for the Astrid and Lilly Save the World season finale!

Here’s hoping we get another season (and many more) of this fantastic Syfy series.

Hidden Remote: I’m curious about your initial reactions when you read the finale script, specifically regarding Brutus’ betrayal.

Jana Morrison: I didn’t expect it. I honestly had so much trust in him, and it’s funny; I felt really upset for my character because she has trust issues and abandonment problems, right? So I felt really sad for Astrid. They didn’t deserve that. I’m excited about what the fans are going to think.

Samantha Aucoin: I was so sad when I read it. There was a lot of speculation on set about what was going to happen because we didn’t get the last episode until, I want to say, two weeks before we shot it. When we read it, I was so bummed. I was like, why?!

Morrison: Someone had to be the one, and it’s really sad that it was him.

Aucoin: I know, I know, I get it, it’s fine! I guess. [Laughs] I actually am excited to hear what people think because we’ve set up that he is so good-hearted, and the fact that he does this, I don’t know if it will be expected. I think it will set up a lot of interesting things that will happen if we get a season 2.

Hidden Remote: Samantha, Lilly and Candace have become such a popular ship. Everyone loves FortWell.

Aucoin: Yes! It makes me so happy!

Hidden Remote: They get left in a tricky place at the end of the finale. What do you hope happens next for them? Is there anything you can tell fans when they read this about the future of their relationship?

Aucoin: They are both high school girls, and situations like that are hard to go through. But also, we are in high school, and even though it might seem not the greatest by the end of episode 10, there’s always the possibility that things flip and switch in the second season. I wouldn’t dwell on it too much.

But it is sad as well. We do kind of leave them there, but to put it into perspective, you know, [Candace’s] mom has just died, so I think she is going through a lot of emotions, and Lilly just happens to be there. Maybe part of it is just her sort of needing to have someone to blame, but I would say have hope for the second season! I can’t imagine them being mad at each other forever.

Hidden Remote: What has it been like for you to see such a passionate reaction from the LGBTQ fans?

Aucoin: It has been amazing; it blew me away. I’m so happy that the fans have been so attracted to this couple and this pairing. Julia Doyle, who plays Candace, we’ve been messaging back and forth this entire time if there’s a fan edit or [something]. There’s a bunch of them, and it’s so cool to see.

Hidden Remote: I think part of the appeal, too, is that that specific trope is so rarely done, especially between girls. I saw someone refer to it as like if Buffy were dating Cordelia.

Aucoin: Totally. It’s really cool that the show does this. I was so happy when I read this character arc for both of them because you’re right; it doesn’t happen that often.

Hidden Remote: I also love Astrid and Sparrow. You guys have been so adorable to watch develop this season. In the end, it seemed like there might be some vibes between Astrid and Tate. I’m curious how you think those relationships might develop next season?

Morrison: I think that relationships are constantly growing and changing within life, so I have no idea what will happen next season for any of these characters. Tate has some redemption moments. Not everyone should be canceled because people can change and grow.

I’m excited to see where it goes, and I think the relationships are really cute, but I’m so happy for the LGBTQ community to have Candace and Lilly. There are enough straight relationships, and it’s so revolutionary for our show to have that. I love the gay agenda! [Laughs]

Hidden Remote: You all have such great chemistry together, even in the friendship scenes. I love the found family thing that has started to develop between them, plus Tate, plus Valerie, plus Eggs, so I hope we see more of that if the show gets renewed.

Hidden Remote: What are you guys hoping for regarding your characters’ friendship? I know they went through a rough patch this season, but they get to a much better place at the end. What are you hoping for Astrid and Lilly, specifically?

Aucoin: No one’s ever asked me that before! Great question. I think there will probably be a lot more things that happen that they’re going to have to work through, just social things and growing up puberty and all of that.

I’m sure there will be more battles that they have to face together, so I’m looking forward to that. I’m looking forward to those real situations and genuine moments that they inevitably have to go through as they get a little bit older, and I’m sure we can expect to see that in season 2—more things we’ll have to go through together, and apart, as well.

Morrison: I think I’m most excited to see if their powers stay and what new powers might come along. I’m kind of hoping for maybe some mind-reading between them because you know when you’re with your best friend, you just start to think the same, and you look at each other, and you get it. I hope there is some actual mind-reading happening next season. That would be awesome.

Hidden Remote: do you know if there are any plans to sell those Pudge Patrol jackets? I know some people were asking, and I would love one.

Aucoin: I hope so! I know our amazing costume designer, they made them, but I don’t know! We should pitch it, though, Jana. We’re going to pitch it.

Morrison: I love that people want to rep Pudge Patrol because it’s something amazing we just took back to make ourselves feel better. It’s nice to take things back that were meant to hurt and make them fabulous!