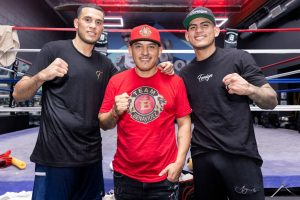 David Benavidez is one of the fighters who remains at the top of the super middleweight division and is looking to become a world champion again. Although right now he has a fight coming up against David Lemieux, he is thinking about all the big names in the division.

His father and trainer, David Benavidez Senior, who has always been close to his son’s career, talked about different aspects of the career of the American boxer of Mexican descent in a program with journalist Jorge Ebro for El Nuevo Herald.

He assured that “Red Flag” can adapt to many styles and do whatever he wants to do in the ring, but it all depends on the opponent he has in front of him.

“We are very happy where we are. David can also box, use angles and a lot of waist, but there has been no need to use it. People want to see David punch. We don’t want boring fights. We try to give people some action. We will destroy all the fighters. When there is a need to box, we will do it,” said Benavidez Sr.

When questioned about whether that style of boxing would come out in a hypothetical fight against “Canelo,” he talked about how to fight the best pound-for-pound fighter today and also how to do it against Cuban David Morrell.

“Canelo is not that fighter. You have to put pressure on Canelo in order to beat him. Against Canelo you have to use the jab to the chest to unbalance him and throw flurries so he doesn’t get ready and throw his flurries. He’s not like Morell, an Olympic fighter, a crafty boxer and we’ll have to use our boxing, keep on moving. We can’t stand too much with Morell,” he continued.

Benavidez Sr. went further and assured that the Mexican is much more predictable than Morell when it comes to fighting and made it clear that his son wants to face the best in the short term.